Ok where do I start? There's really a lot of things to like about this knife though it has barely been two  days since getting it.

Black stone washed. I definitely like the color on the handle a lot better than the usual faded stone washed look on many knives these days. Fading, in my opinion goes better with use. A look that naturally evolve over time that tell stories about the piece.

While having a couple of safe queens to keep in pristine conditions but by and large I believe my interest will be made up of things that I am actually going to use but better constructed and better quality.

Form follows function. A knife is a tool and with usage there is going to be wear. Sharpening blunders and some other messing up, all to contribute to a more rounded experience like anything else in life and like all my old but still functioning user blades.

Seriously how many Ferrari do we need to buy only to keep inside the garage and admire!

Colors are really individual preferences but with the greenish-gold clip, gold standoffs and the blade polished off to a shiny finish, it comes off as a well matched combo in comparison to many of today's production or mid-tech knives sporting dull stone washed/ coated metal surfaces. I still like the polished look. Plus the whole package comes at a very decent price too.


At the local distributor's place over lunch I had the opportunity to try out a few Reate models.

Weighing my needs and usage, it was down to the Horizon C and the Hills...though the distinctive blade shape of the District 9-B was pretty interesting (from a functional point of view). I would have gotten that one if  I was still in my fish farm  job, unpacking all those boxes where a robust tanto point like the D9-B would really come in useful on a daily basis.

Seriously it was hard to choose. There's an urge to buy all...

...the Hills was smaller but presents a very nice upsweep edge that would be great for slicing. Those that love to "test" knives by cutting paper would probably be able to do 2mm horizontal julienne strips whole day long.

It's fun but I am not buying knives just to cut paper (which seems to be 90% of all the test video on youtube these days!). It was the buttery smooth action of the Hills that makes it really hard to put down. Closest thing I felt in comparison to my well tuned F95, my benchmark whenever flipping open a potential folder to purchase. 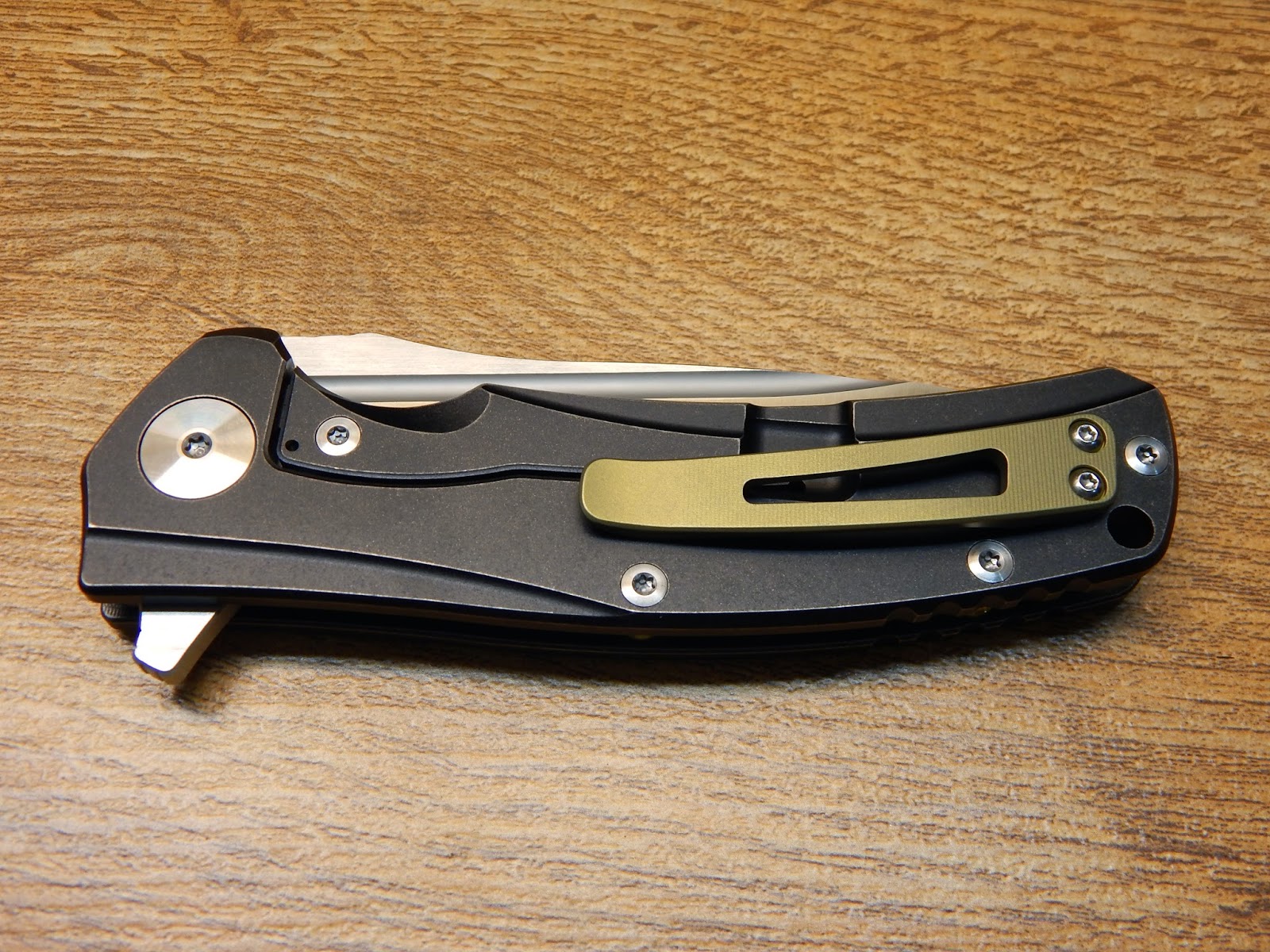 In the end it was the Horizon C that edged over its siblings in my boggled mind. Bigger and a more robust overall feel. Snaps out like a rocket and a shiny blade that is both longer, wider and hence more at home on my greasy left paw. Ergonomics on the flipper tab makes it easier to open this rather strong detent folder. This, is a working tool I will bring outdoor on my rides in the trails and many other foreseeable uses. 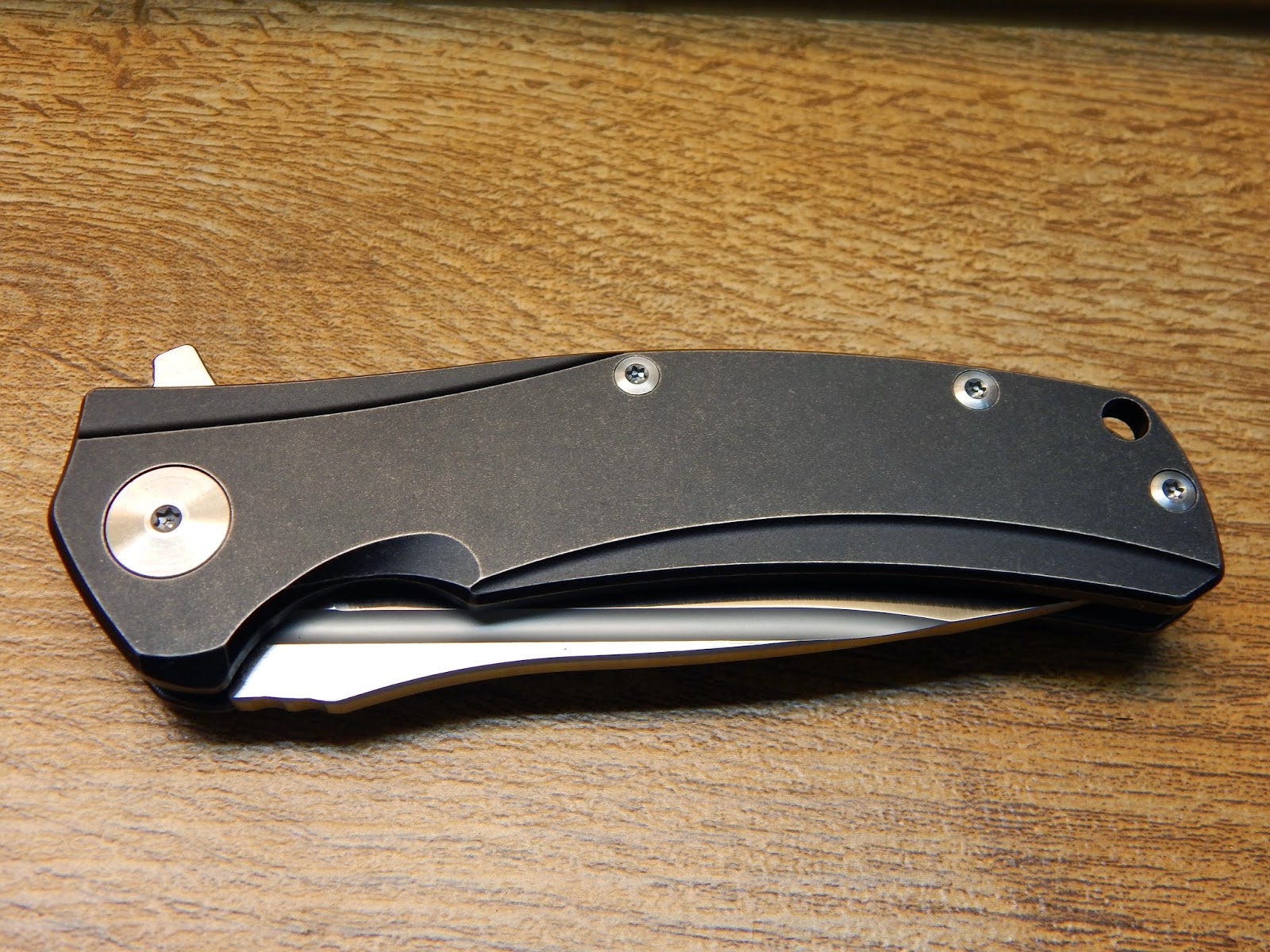 It's not all shiny satin.. a fluted grind and what looks like bead blasting on the channel creates a double tone on the blade as seen in the pics above. The "C" has lost the recurve of its earlier versions. Personally I do like this a lot better.. what I would really like to see next is the shape of the spine. Forget the sudden drop in after the jimping but go with a long convex drop point... Or maybe even make a harpoon point...my other favorite as there is enough width in the blade to go well with a nice flowing harpoon. Moreover without a dropping spine design could allow a higher flute which could make for a useful secondary opening method. Ok I'm going way off course here with potential future designs...

Objectively, if one is choking up on the blade, the dropped spine has a nice ergo to place the thumb down for doing some fine cutting/ shaving task. Speaking from having other knives shaped in similar fashion to the  "C" here and a penchant for idle branch shaving when in the forest by myself.

My take on frame locks...

Somehow more frame locks are ending up than liner locks in my little stash. To be honest, I started off leaning more towards liner locks because for a left hander, it means that during opening and closing it means less chance of impediment that may obstruct the opening or closing of the blade. I have also realize by now that some right hander frame locks are easier to operate with the left rather than right hand.

Beyond a certain minimum size, a few other factors in design and size in terms of width decides whether a frame-lock folder is for me when it comes to ease of operation. A wider folder means more grip purchase.. less chances of contact on the lock and avoid "misfiring" into full lock up for the blades.

Then I realize there is also one difference to the "spring", ie the hollowed out portion on the lock which can be either inside or outside. Generally if they are on the inside, it feels "weaker". Easier to unlock with a slight push. Make sense as the solid portion runs partway before there is less resistance in a sideway push as the hollow now is in line for some lateral flex. For those on the outside, the path of resistance would run all the way towards the end making it feels "harder". Thickness of material is of course another aspect to consider. The Horizon C is both thicker and hollowed on the outside in this regard.


Not sure why one maker choose one side over the other. I'm neutral. For whole day of doing nothing but simply opening and closing a folder I'll pick the F95. But the Horizon C is something I will carry and take on more forceful cutting tasks. It's just built robust and stiff with more material, both on the handle and the blade itself.

The closest in term of action from folders I recently handled, the "C" is probably much like  the ZT0801..

The last thing about ease of closing and all this emphasis is not about just having fun with a folder but safety.  An easier to close folder will have less chances of sudden blade movement that can close back on a finger. Here is where I believe the "C" can benefit from an asymmetrical curving in with the lock side a tad higher. The reach of the thumb in such designs allows a much more straight forward push to unlock. When everything is symmetrical the natural angle for the thumb to find some grip before the push away to unlock is oriented downwards which makes things a little harder. Not a life and death but I'll prefer something easier on the fingers here

Anyway all these open/close action is really superficial because at the end of the day it boils down to usage and that's where I always scrutinize the locking interface. How well they stand up to wear and tear over time, a matter of safety concern.

Like many there's a steel insert but unlike those that runs level with the titanium portion, the insert here juts out. Lock up is almost 100% on the contact surface of the insert. Let's see after another couple hundred opening  and some push cutting use, how it all holds up. 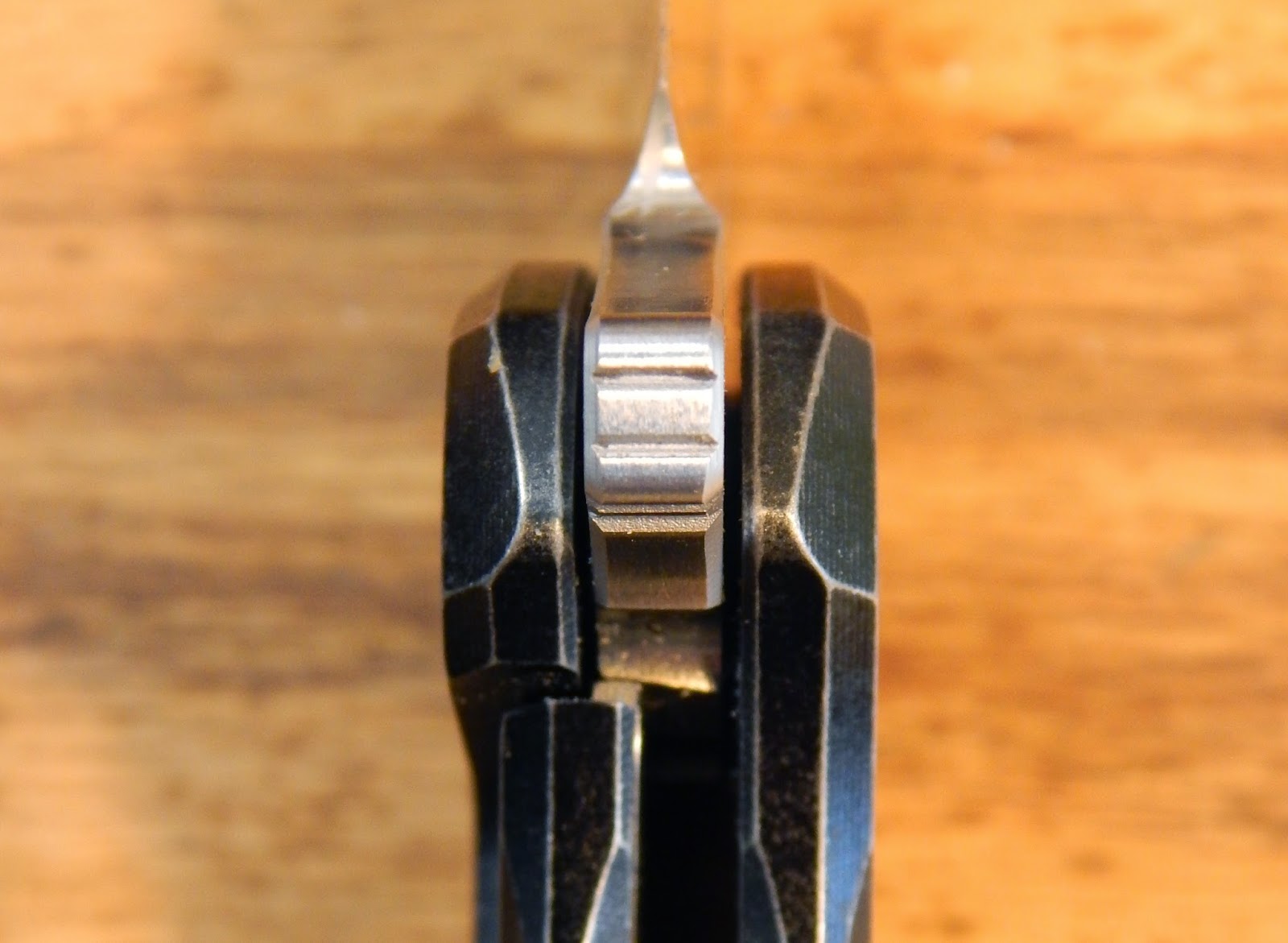 Locking surface on the blade side looks a little scored. I do not know if this was intentional or if finishing was not taken into account.. My guess is the former as it allows more "catch" for the insert to lock things up. 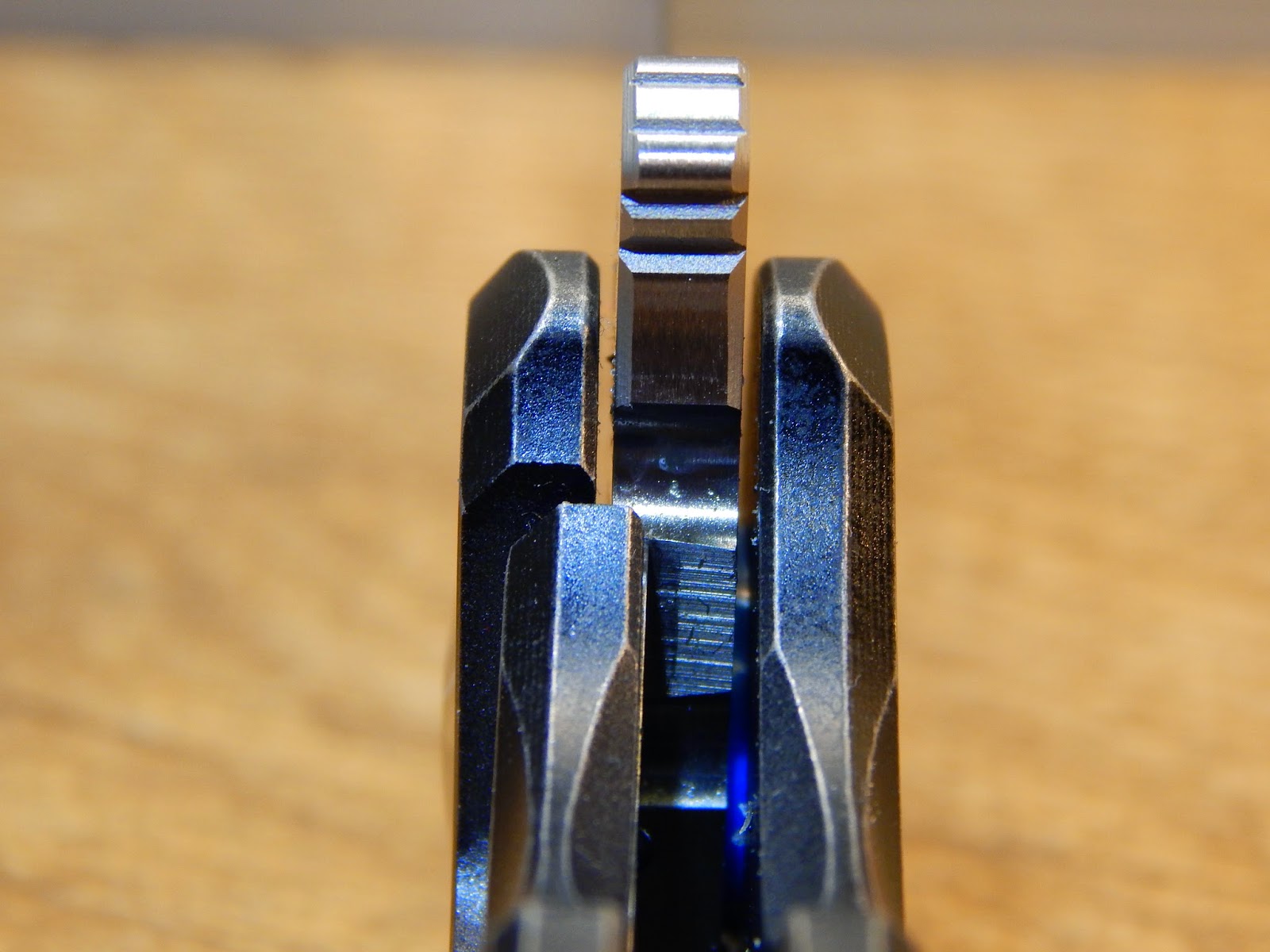 Whatever the case... it seemed like  contingencies are catered for... Spare parts...
Since the "C" is a multi bearing-- I reckon the washers are meant as consumables on the ti handle side to interface with the bearings. Yes there is a spare insert along with some different size screws.. 3 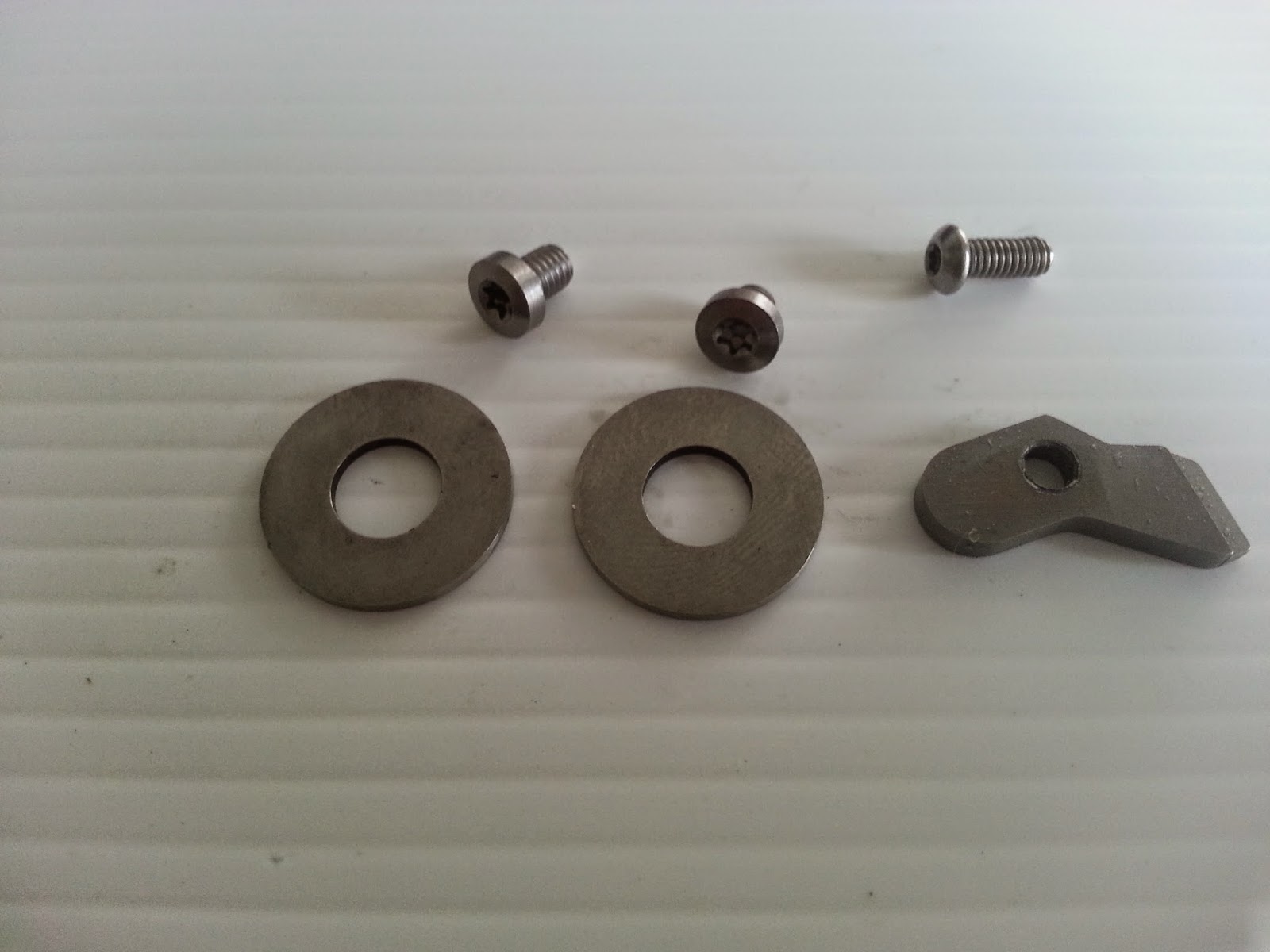 Having been researching bolts and nuts a fair bit due other interests, the hardwares on the "C" look pretty much to be standard industrial stuff to me.  Nothing wrong there. Since this is not a custom knife I won't be whining about why these things are not ornate. I see potential in pimping up the pivot which has enough surface for such things if one should so desire....


Personally weight weenie-ing has never been my things. Like bikes, blades without sufficient weight just feels hollow and a little scary to actually use especially when they are on the larger side where the tendency to brute force the tool sometimes is just errmm "unavoidable.. The "C" though did feel hefty for a 3.75" blade length. Specs wise from the maker himself on Facebook says it all. For those too lazy to click... 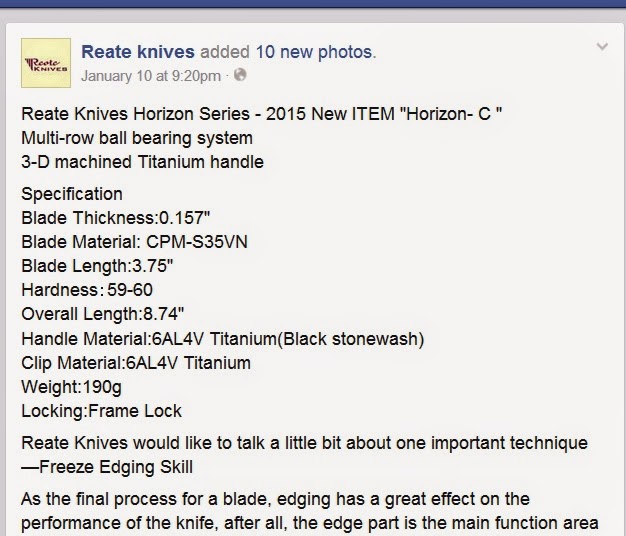 Weight on mine is spot on with the spec given... 190gm 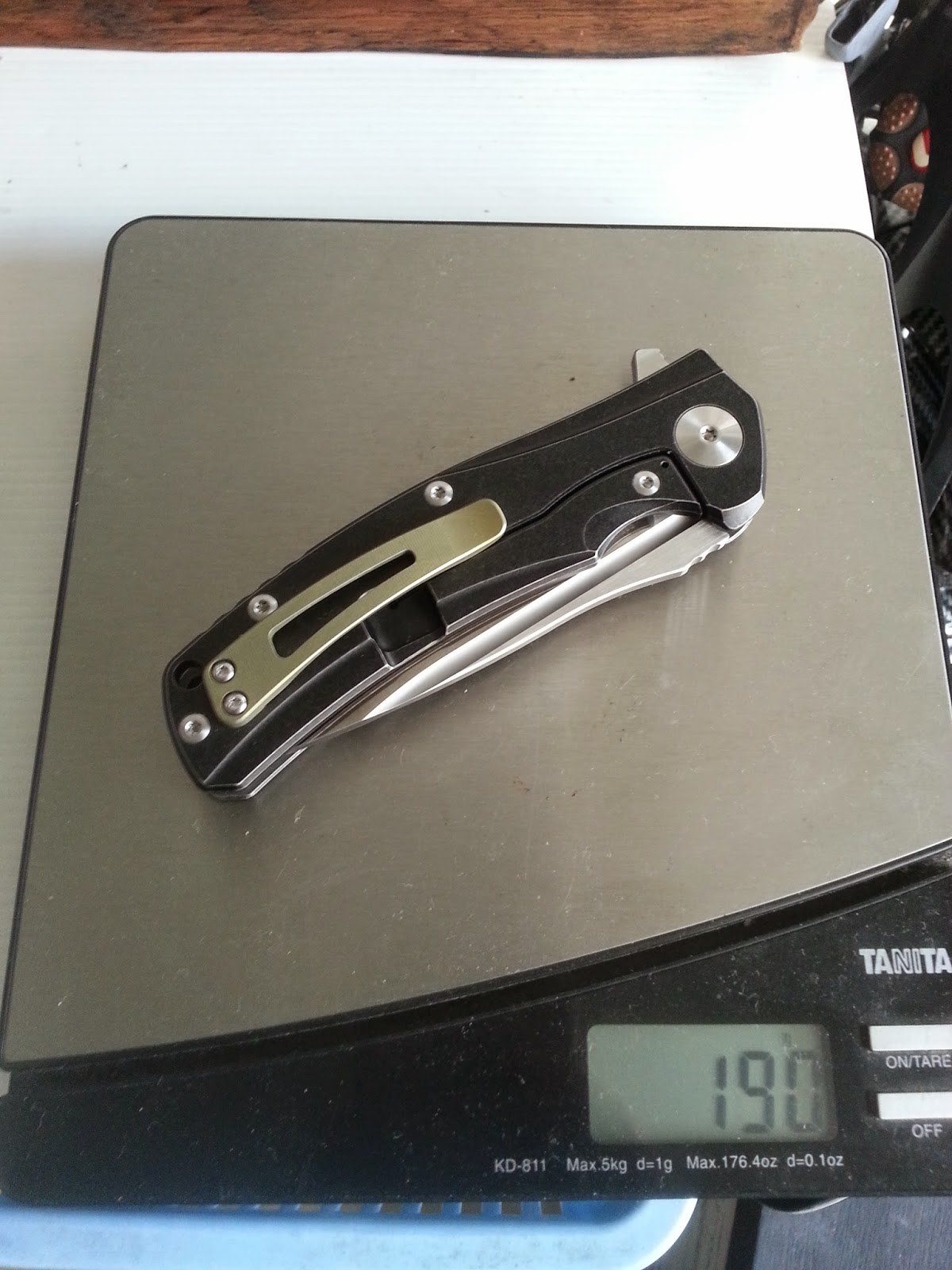 Sharp.. oh did I say it came sharp... Ok I don't like using the term razor sharp to exaggerate an edge but while not as significant like a Scandi grind, there's an obvious generous width edge. In comparison to many knives the stock sharpening is certainly there right out of the box . So much so it left a couple of "shark gills" in my jeans as I was wiping it down to take pictures earlier. Yup. Sharp. 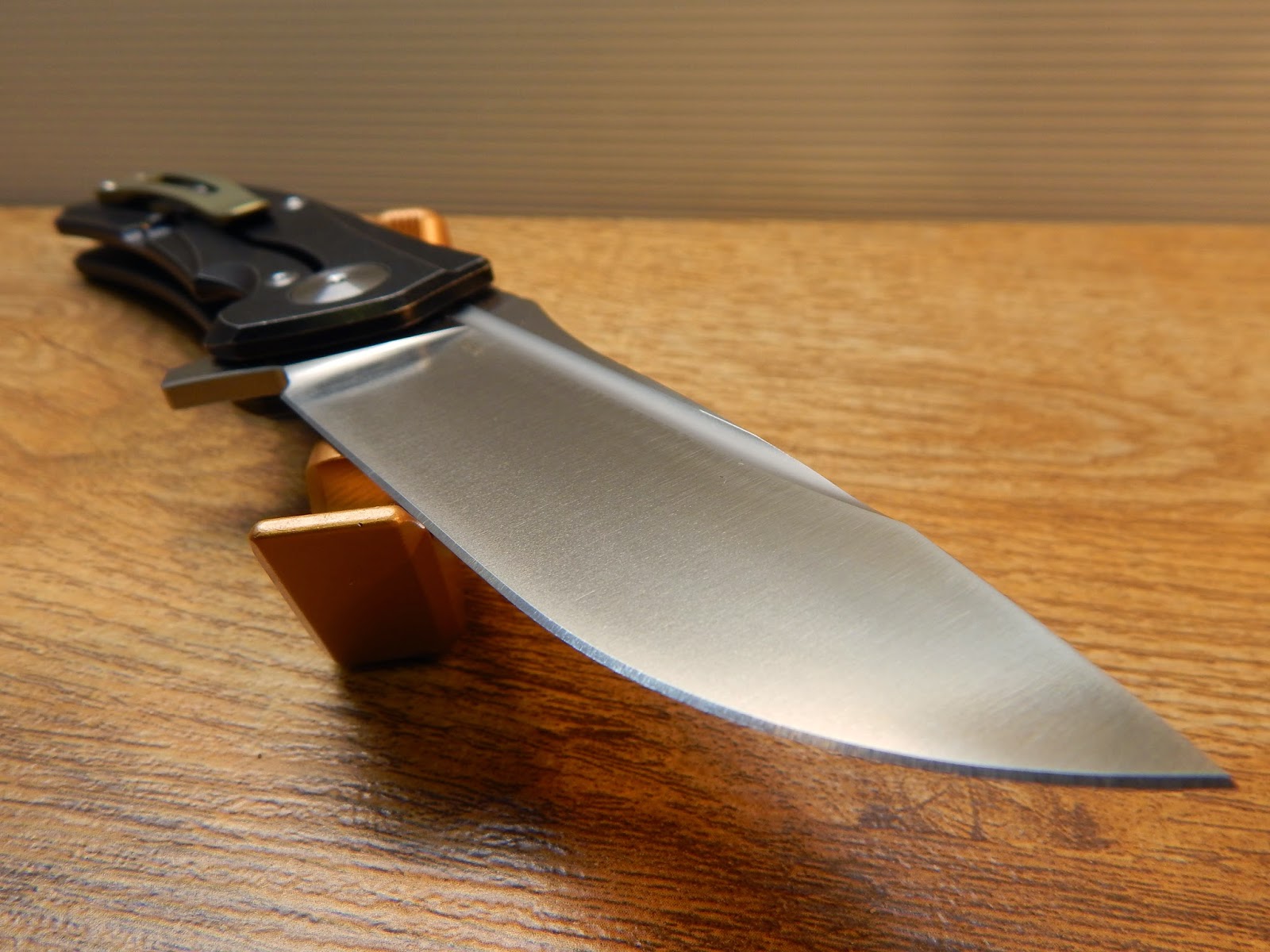 For a lack of things to cut after dinner... really I usually do this with flat grinds but at least one thing I know about the "C" is that the weight and width of the blade certainly gives the momentum to push and penetrate... If your cutting task favors ease of penetration over fine slicing end results this is the blade. Still, slicing it does fair enough, the sharp edge helping along until the thickness of the blade starts kicking in with resistance. but this was on that typical paper test... so if u gonna cut thicker stuff  or simply feeling destructive like slicing soda cans... I don't foresee any issue. 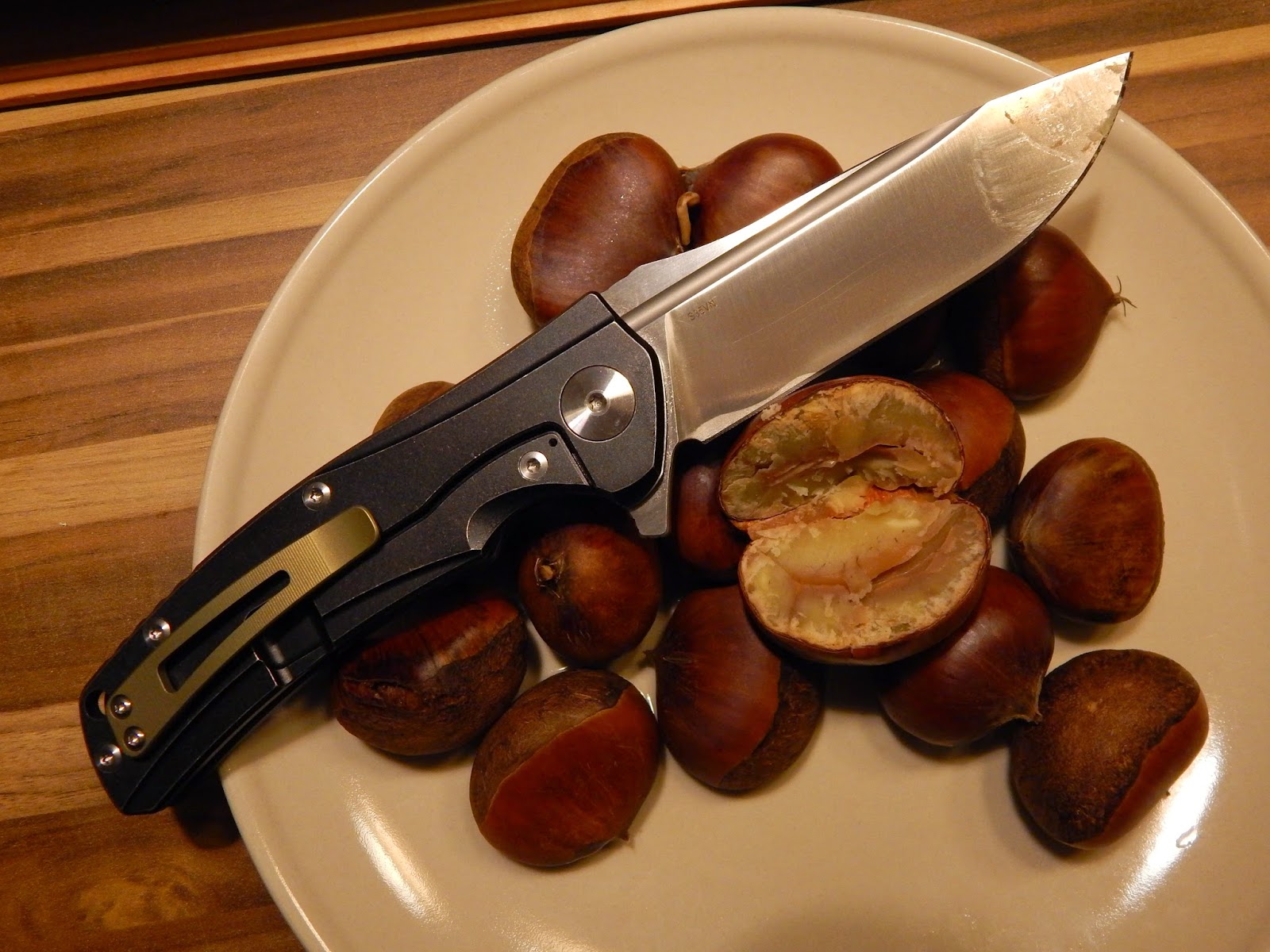 Verdict? So far so good.. let me pack it for awhile more to see longer term usage. 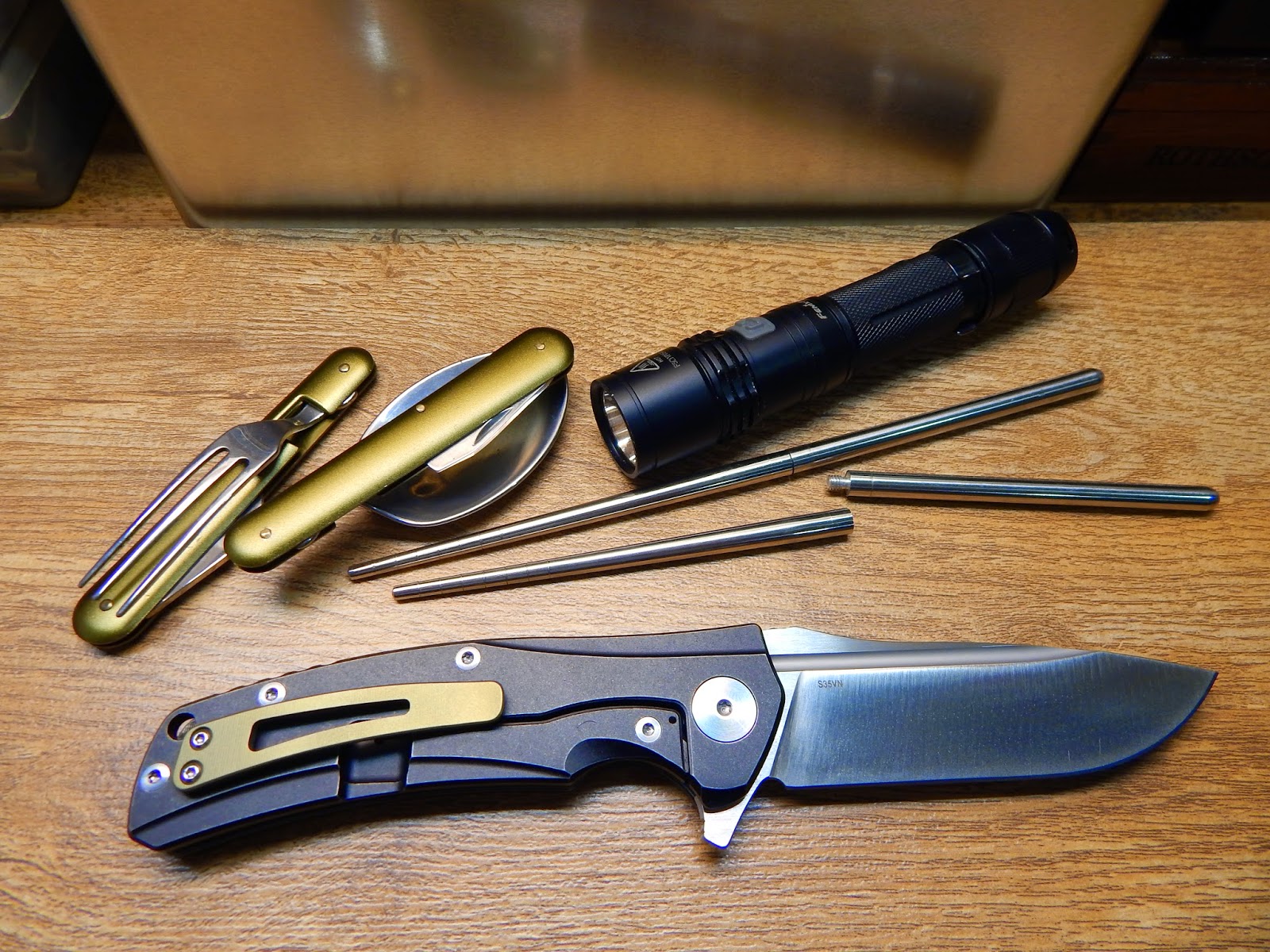 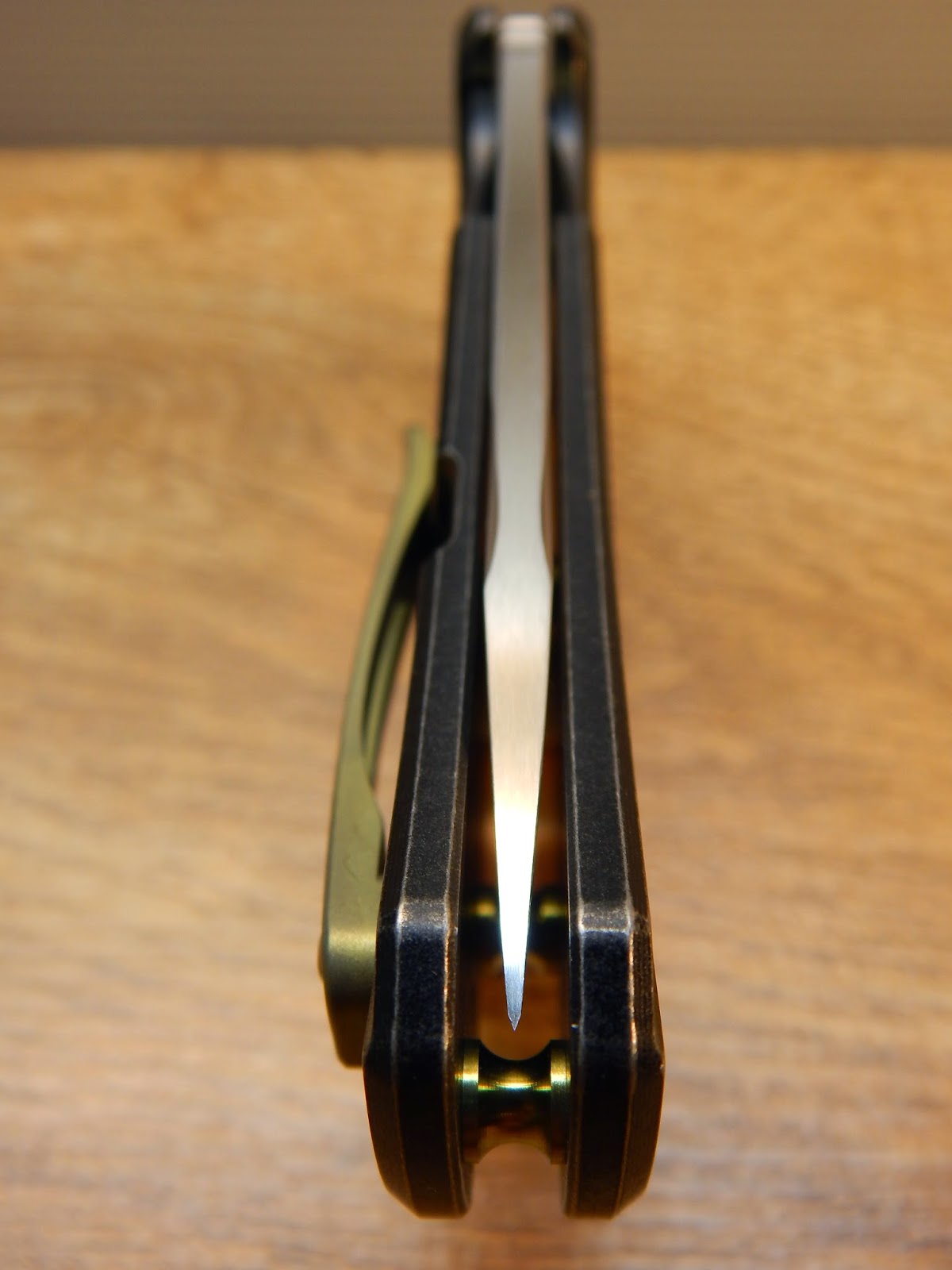 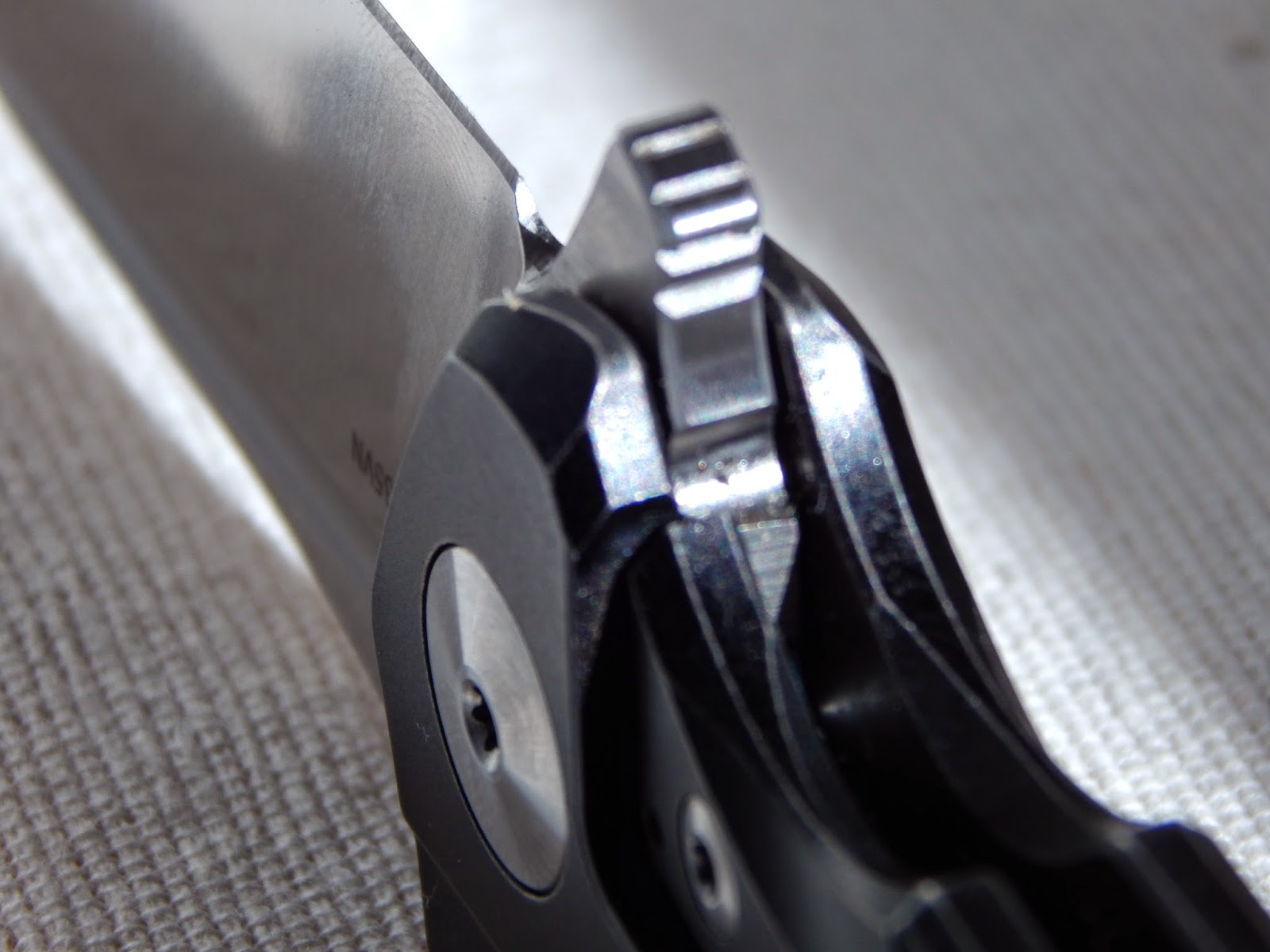 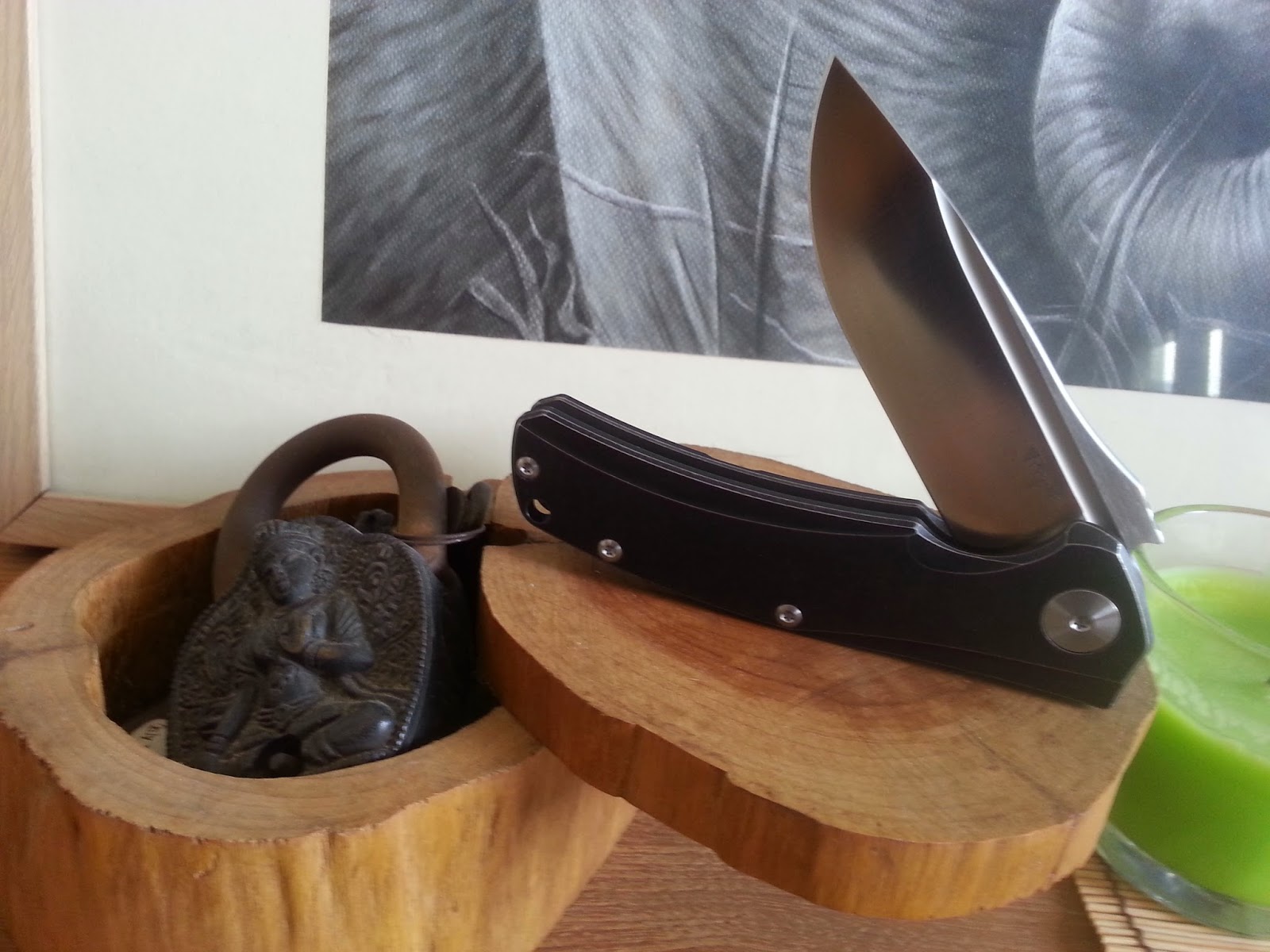 Email ThisBlogThis!Share to TwitterShare to FacebookShare to Pinterest
Labels: Reate