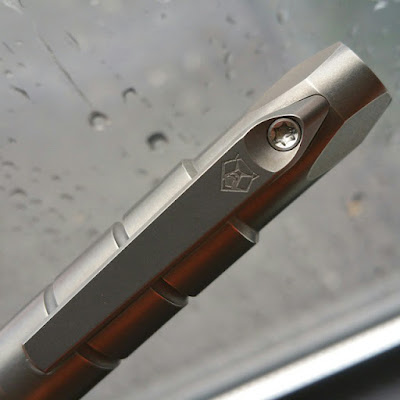 It was only a matter of time...

Prior to this I was using taped up  flat #8 and #6-#7 bits to prevent any gouging of the screws. Type of tapes and their thickness is an exercise in trial and error to get that "right" feel. I think sometimes we all go a little overboard trying to keep things looking perfect and pristine. Then again, these are proprietary screws which aren't easy to get replacements. So there really are good reasons to keep them in good conditions especially if you plan on opening them up over the years.

After disassembling a few Shiros rather carefully, I was wondering if it is really necessary to get the proprietary bits to fit those pac-man screw heads. For all the ones I have opened, they were easy enough without need of much force to twist and loosen things up. Don't think Loctite or equivalents are used on the screw threads of those mauled by my paws.

Hesitated on getting the older standalone driver bits and did not hunt for those. Ergonomically speaking, those didn't appeal as there is much chance of a slippage when using them. Perspective changed when a couple months back, the news of this screwdriver/pen was made official, together with the comments from people who know their Shiros. Not sure about all the Google Translation I've been relying upon but seems that officially this item is called the "Pen-Transformer" (Ручка-трансформер)

Opening with plain jane flat bits.
Some people have problems with theirs up but if its not new, then it's likely someone else might have opened up and while putting it back, adding Loctite as a measure to keep things from coming apart. I think it should never be done.

Except for the older generation pac man screws, which are smaller in diameter from an older F95 I have seen, the female screw is also hollow) most Shiro now have a female side that is flat.. There is almost no way to "grab" and create any kind of force in opposing direction if Loctite had been applied. Of course the usual methods like immersing in hot water etc can be applied. But...

Keeping the screws down sans Loc-tite.
When opening up my F95 that was bought used, I saw the remnant of those yellow cobbler glue which gets rubbery when dried. Reckon when applied to underside of the screw head and let dried.. it sort of create a thin "glued-on bushing" but it's only to one side.  Put the screw in and tighten down.. it would have a suction/friction effect with the handle side to help things stay in place.

In my opinion it is a much better way to keep things together if ever needed though not the most aesthetically pleasing when u open it up. Then again all pivots of knives that are actually used get black and gunky over time anyway.

But whatever tools, it pays to take that extra care in case of accidental slip ups by having proper leverage and protecting interface where possible..