Beyond the usual procrastination for writing less these days, it has partially been a matter of settling in with edged things by now. Hold enough knives and there are very few that really kick up that sense of excitement anymore. Since I am not into art knives or blades normally decked out with embellishments and exotic materials, things that catches my interest got rather pared down.

Yet, every once in a while, something fascinating will pique my interest....

For one I have been a fan of Brad's work, just never having luck in scoring any. The design elements in many of his work falls in line with my rather acute parameters towards knives. Of course that penchant for anything Shirogorov needs no introduction by now. Hence with the announcement of this collaboration, it was only natural to gravitate into an all-out attempt in securing one. 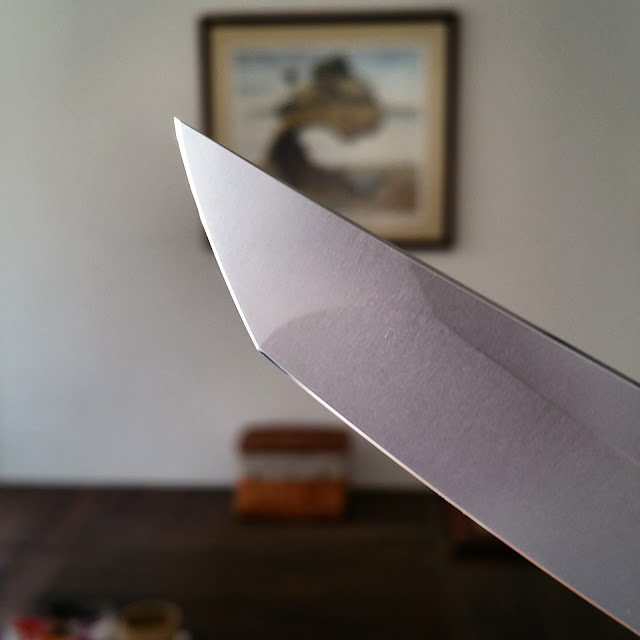 Tantō blades or should I say the modern edition, the "American Tanto" has not been my choice of blade design in choosing a carry.

There are other Japanese edged weapons with 2 edges, not curved but known by different names which eludes me now. Anyway this genre of blade shape is very different from the traditional Japanese tantō (短刀) aka "short blade". Barring those oddballs under the tanto family like saw-blades and pistol tanto etc... technically, in the most basic form it is a short sword which normally spots less lines, simpler grinds and definitions overall. Many things done on new age tanto actually would be found in others like a wakizashi or katana especially around the tip (kissaki) area.

It would be really unfair to compare everything to a traditional tanto and desiring to only see things that follow those to the hilt. In any case I view the whole category as a borrowed name. Ultimately it comes down to the creativity of the designer by integrating the aesthetics with functionality.

Many a time it is the abrupt angle of the two edges on the design of many that makes me look away. Generally, I'm more partial to knives with a continuous flow. Therefore another feature normally shunned are compound grinds.

How much the front edge angles inwards has a significant visual impact, tip strength etc, but most have either a dead-on straight edge or in totally opposite fashion with a rather exaggerated curve. The latter is sometimes seen with a more complex "compound" edge too. Just my opinion here.. having too many things that should not have been there in the first place, is like adding legs while drawing a snake.

Alright, enough rants...  here are the things I find with the RFT from tip to end. This final execution after endless design refinements, no doubt, still puts it in a very odd place within my mind initially... 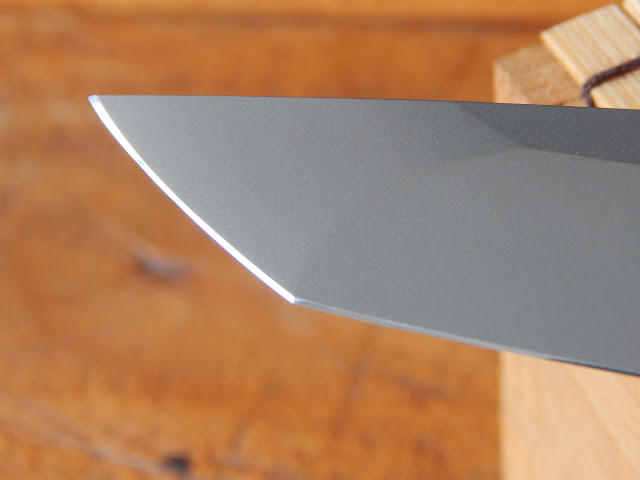 Note the subtle curve of the leading edge geometry, bordered nicely on the insides with a grind line meeting the "yokote" (dividing line) of the two edges. While not traditional, the execution in the overall design with those resulting lines certainly allude to edged weapons of the country where the modern tanto was inspired from. It is a mixture of seemingly different things found in various Japanese knives, yet it is not.

A modern twist melded with those lines in the background of the mind during the designing process is evident. A case of functionality meets art, nicely accomplished in the RFT.

Sure didn't take long for me to overlook my bias against the 2 edges from here on...  or about 5 minutes after I stared at the blade straight out of the box. 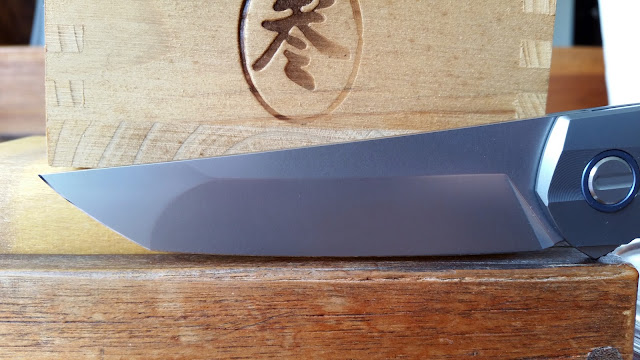 Width. Tapering from 28mm down to 18mm where the edges meet, there is just an ever so slight belly, adding back a sense of gradualness in the overall shape when viewing the entire blade. Together with the straight back and proportionate thickness, it gives a sense of speedy thrusting precision when employed in that manner.

Moving back from the tip, the thicker spine, not often found in traditional tanto does well with the shape of the RFT, imparting a sense of rigidity.

The edge feels to be convex but I can't be 100%  sure owing to the almost mirror finish and bad eyesight.  Edge width is between that of the Jeans and Dr Death collaborations.

If based on a common sense logic of overall width, then all three seems to be following a descending pattern of width with the Jeans being the broadest, RDD the narrowest and RFT taking an intermediate spot.

Logos are back on the insides of the handles on this collaboration, which is how I like them too. Leaving the external a clean unmarked look.  Of course, by now all special editions comes with milled inner sides to keep weight down.

Serial no. checked,
Symbol for the SRRBS with steel washer, checked.
But where is the the make of the steel on this one, which would be M390. 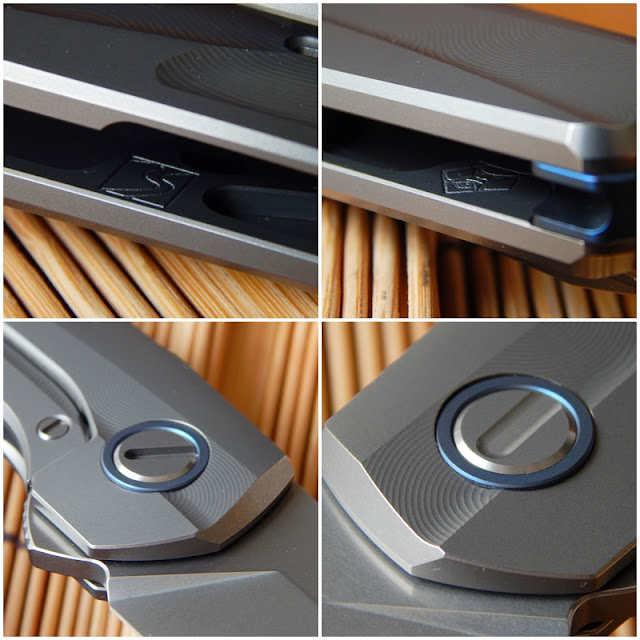 Double sided pac man screws! No wait... looking again, only one side can be worked on. But this is most certainly a trickle down trait seen in the Shirogorov full customs. There might be some in Custom Division knives but I really don't recall now. However, another obvious can't be missed trait would be the sunken pivot collar. Already seen on a few Custom Divisions but definitely a first in collaboration editions, excluding the Dark which I consider to be something else.

The milling in the center 1/3 of the handles is a refreshing touch. 'Spiraling waves'. Personally I reckon this milling pattern has something to do with the imagery to be associated with this knife. Anyway on the 2 sides sandwiching it, is a series of really fine horizontal milling, almost not visible and not captured well on my camera.

One key feature that attracted me early on was the flipper tab. Minimalist. Not some in-your-face giant dollop sticking sorely out of the knife. The concern is always wondering if it is sufficiently big to give the necessary leverage when flipping out the blade... but more on this at the end.

Aesthetics wise-- this scores big points for me on the RFT. 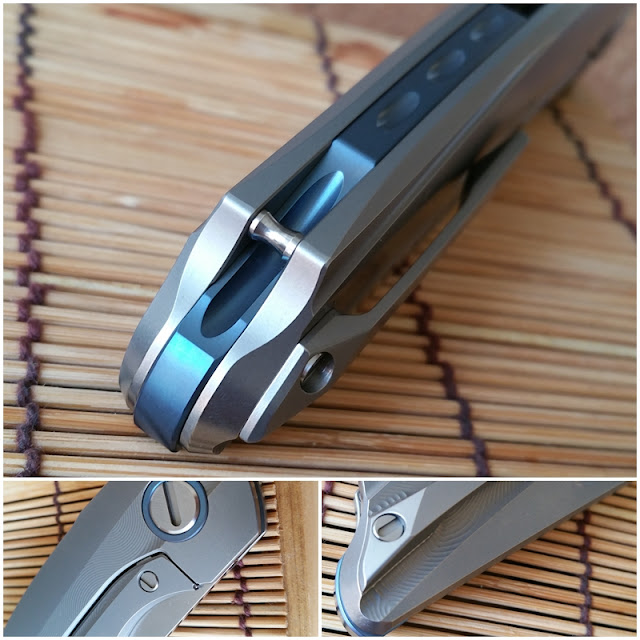 Butt-sthetics. The imagery that comes to mind  "dimples and curves" complementing the milled "spiraling waves" ... much like ogling the bikini tribes at the beach. Only here, it doesn't mind being touched.

Having a screw for the clip which is the same size as that used at the lock insert -- that seem to be the only thing holding up the whole assembly together with the front pivot. Minimalism at work.
This seems to be another trickle down from the full customs, take a look at the presentation side of the F7, like the RFT here there is only 1 main pivot showing. No other screws visible in the rear.

Strength? No discernible weakness or warbling/ play so far after a few hundred flips. The screw clip seems to be a through piece assembly threading both handles and the back-spacer. Yet there is nothing showing on the presentation side. Tip shape naturally allows for a wider back-spacer end for such a design/construction. Maybe part of the back-spacer is interfacing with the handles like Lego bricks? Wouldn't be able to tell unless the knife gets disassembled which I am not inclined to - at least not now, given the smoothness of the action right out of the box. For the moment, how this 1 tiny screw keeps everything together in the rear is a mystery.

Quite pleasantly surprised by the size at first sight. Big, yet didn't feel as big as the 111. A little more like the F95 in thickness but with a little added length to the blade making it feel just right-- The "missing in between-er Shirogorov" that has existed only in my mind before...


Giving a +/- 1mm or gram tolerance, numbers as per the above official specifications are spot on, right down to the weight.


Slim seems to be the trademark these days... 3.5mm thick instead of 4mm for a knife this size. I was squaring away mentally whether there is enough steel in the RFT during it's announcement. Turns out to be a case of unnecessary worrying. While slim, the 3.5mm runs the bulk of the blade length and a good 20-30% of the width before tapering off into the flat grind down to the edge. Even with milled handle pockets, the knife still weighs 145gm. Much of that does come from the blade which lends itself nicely to the momentum when flipping open.

The other thing is the tolerance to the handle when closed. It would be a step closer to the Shirogorov full customs and a few other good custom knife makers work I have. Knives like these really leaves very little room for alignment error. 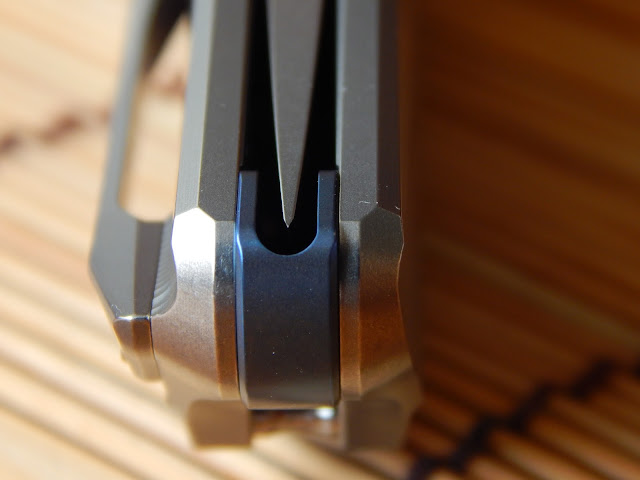 Tip Parking- yet another seemingly new trend to showcase precision these days. 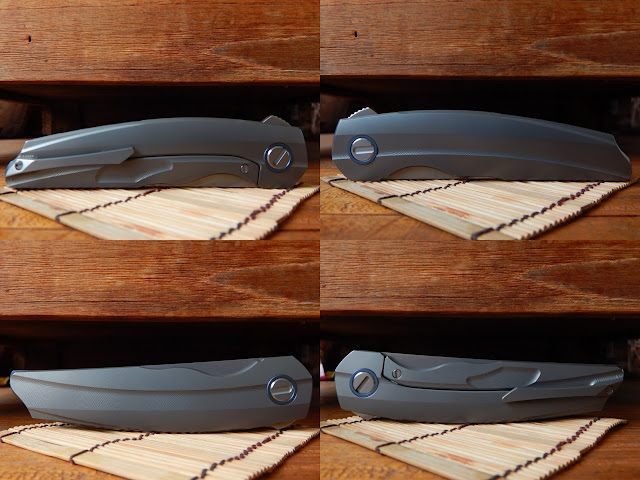 The other attribute that added to the reduced profile on this rather big knife is the flushed spine of Brad's design with the handle. Blade only peeks out from the tiny cut-outs on the handle 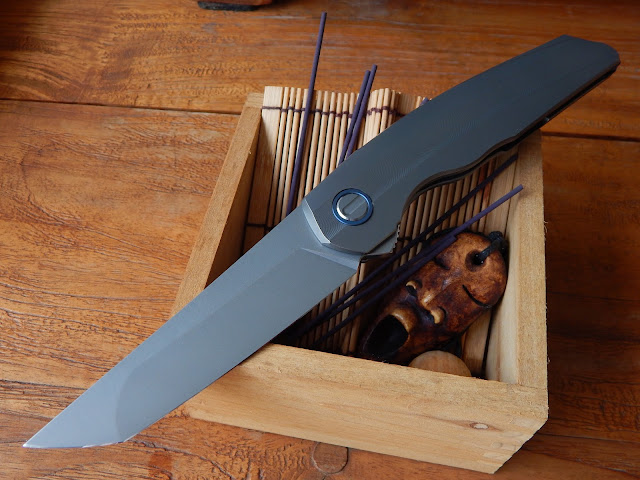 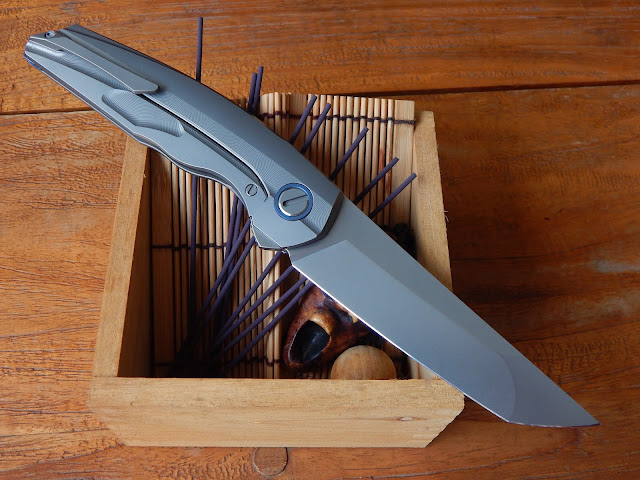 Coming to the "default" action clip...

I saw a few videos where there seems to be some fumbling during opening. My first guess was the reduced profile of the flipper tab. Apparently not. The tuning, lock and detent strength is really one of the best for a big 4" blade I came across. The trick lies in not touching the lock bar when opening. To that I would say--this is really a right-hander frame lock that has been optimized for us lefties. The video should be telling :)


Summing up, I never thought a tanto would make it to the collection and entertain even lesser thought of carrying one. This one has tossed things up quite literally for me-- if the stars align as nicely as the blade in closed position here.. I would spring for a second one as a use-and-carry workpiece. In particular that pre-production "unobtanium" prototype with zirconium pivot ring and backspacer would be really nice to have... ;)