For an official description on this knife, please go to https://www.shirogorov.com/forums/models/sovmestnye-proekty/1287/

Below is my rambling positive bias as usual but what I would truly think is befitting of a marvelous design with the usual high quality of production and attention to aesthetics in Shirogorov made collaborations.

When words were whispered ~ 1.5 - 2 years ago that there is a collaboration between these 2 makers, I was naturally excited. Familiar with most things Shirogorov but having only handled 1 kickstop and had always wanted one ever since...

... but it's a little more than that. A conversation with few friends after being introduced to the kickstop from 1 of 5 Williams-Mayo collaboration, the Donk, I came out with my idea of a "perfect knife"-- a 110 but with a kickstop. I think no one that day honestly ever thought my babbling would ever materialize someday. 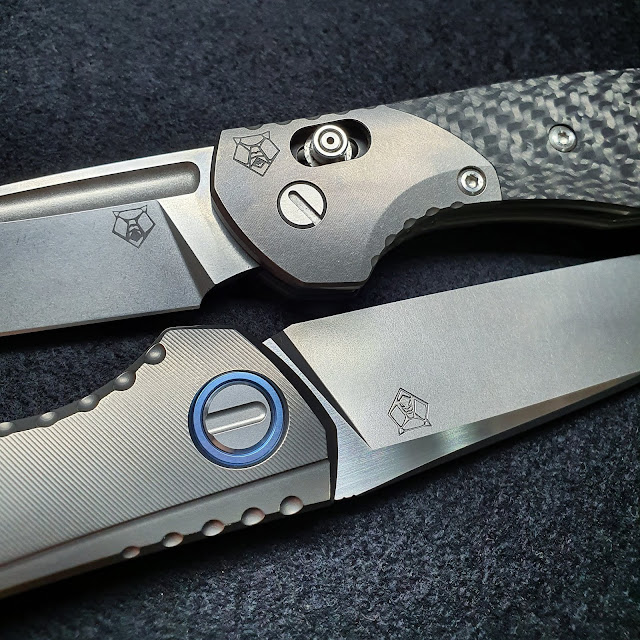 Definitely not a spin of creative writing on my favorite brand of knives to make things sound more interesting...

... My first Shirogorov and also the first serious knife to start off was none other than a rather uncommon  specimen of a Model 110B pictured above.

With murmuring of a collaboration I thought it would be a norm by now, like with the RDD, RFT and Hokkaido.. a design from a US maker, refined and produced at the Shirogorov factory, until the name 110 Kickstop surfaced...

What in the world can a 110 be, a name not found in any of Lee's models so far.  Surely they aren't talking about the exact thing I had in mind 3-4 years ago!

And if that sounded like the climax to an amorous nite.. I would say the sensation of the neurotransmitter in my brain firing away is rather close to those feelings Excited would be an understatement.

The only thing I fervently hoped for was that there isn't going to be a huge dollop of a flipper tab sticking out from what's seen with other Kickstop models. I don't know for sure if having such sizes is a requisite to work with the Kickstop mechanism design at that time but having the 110KS now, obviously it's not.

However given how the last few collaborations turned out, I was almost certain Sergey would have some serious thoughts put into this department on a knife. With the 110KS pretty much his own design, it was with certainty that the profile and obviousness of a tab would have to be aesthetically pleasing and gel with the rest of the knife even if its just visible in the closed position on this one..

Some may say a large flipper tab has its merit to act as a guard in normal knives when open and gives the leverage to flip a blade easily... Ok but I'm just not a fan as the visuals simply detracts from the rest of everything that would otherwise flow. Be it in open or close position. Looking at large flipper tabs somehow makes me think of an enlarged appendix waiting to be cut away in a surgery room.

The reason I envisioned my perfect knife to be a 110 with a kickstop is because even with a normal flipper tab it would disrupt the lithe form of the 110...

... that sensual stiletto-ish shape was the chief reason it was picked as the first knife when the rage about folding knives then was all about flippers and "smoothness" of knife action.

Therefore a kickstop tab that hides away when open but married to the sleekness of the 110 design truly defines what's a nice knife for me, shape wise.


Incorporating the signature 5 line sharks-gill grooves in the lock-spring of Lee design adds a very nice touch to this collaboration. But what may not be apparent without a closer look is the 5 dotted millings at the base matches the rest of the dots found throughout the rest of the knife. The "origin" of those dotted millings were found on the 110B too... in the bolster area.

Overall the combination of these milling bits gives it a classy fierce look while incorporating signatures of the past and of both the makers design elements in complimenting ways, while not taking away the elegance by over complication or indulge in the use of opulent/ colorful materials. .

The visible part of the backspacer is a departure from the norm which are usually jimpings at 90 degrees to the length.

Taking a closer look, I reckon that the clean lines on the 110KS backspacer indeed fits better... having the usual railroad track jimping in conjunction with the dotted millings would make it look a little too crowded. Besides, with a big knife like this where the back would extend beyond the hand for most folks when holding, grip would be sufficiently firm without the need for those tight packed jimping.

Directing the line of sight rearwards... 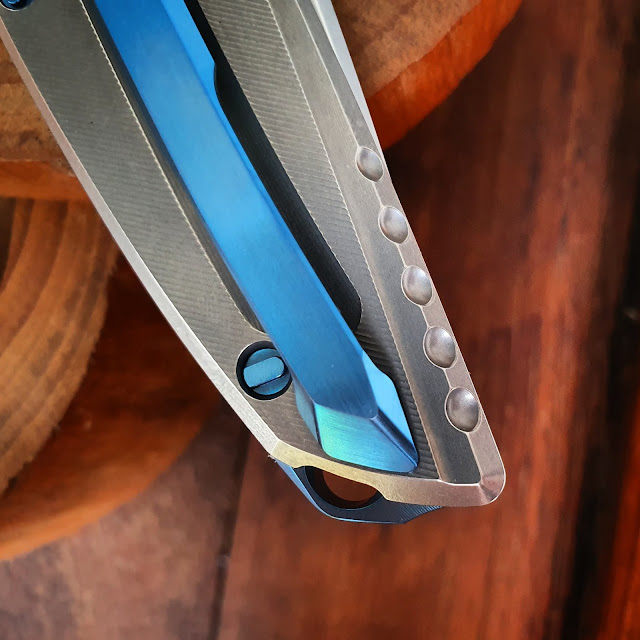 ...Just as with the spacer, on the clip is a satin finish before anodizing, something a little different from previous collaborations which spots a smooth matt blasted finish, some were anodized and some were not.. Here it's shiny but probably more prone to wear marks over time if carried often enough. 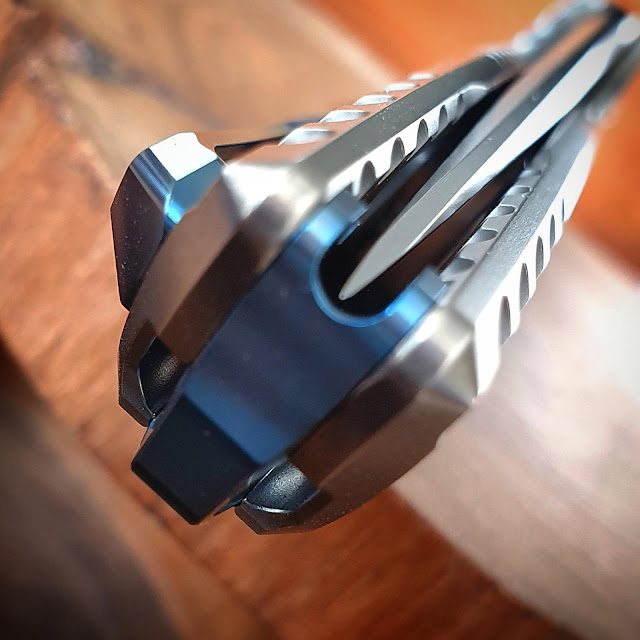 ... Just like the trend that started with RDD, the parking of the blade tip is part of the integrated backspacer.

Centering here is very much dependent on getting the sweet spot in tightening the pivot as I have found out. What's really nice is the diamond beveling in the spine. But that means it's almost impossible to balance the knife on the back of the blade.  Not that there is really much reasons to do it anyway...

Another is the totally hidden screw for the clip which seems to be a default feature by now... 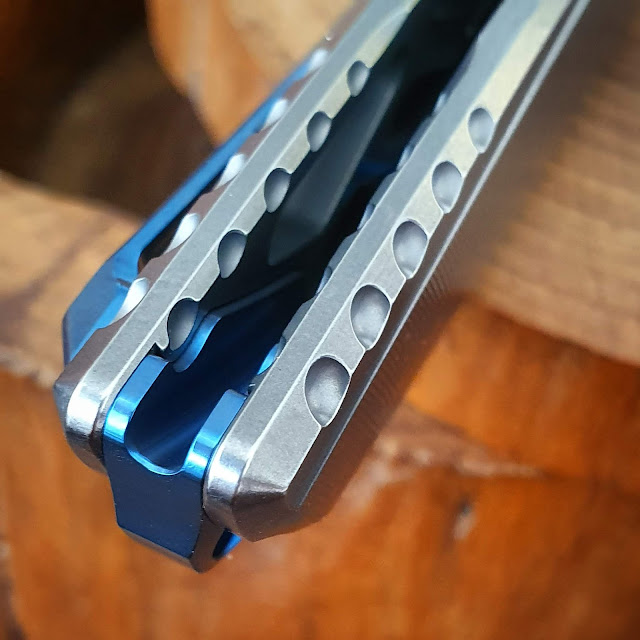 Alright, moving on to full pics before getting to more of the bits... 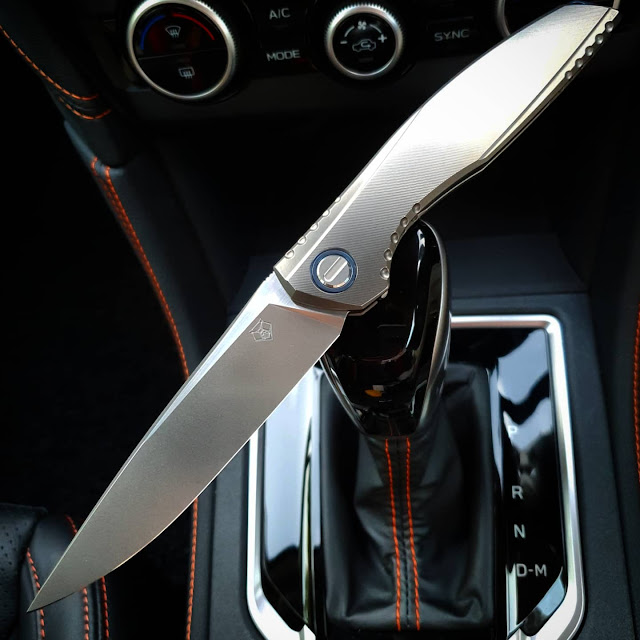 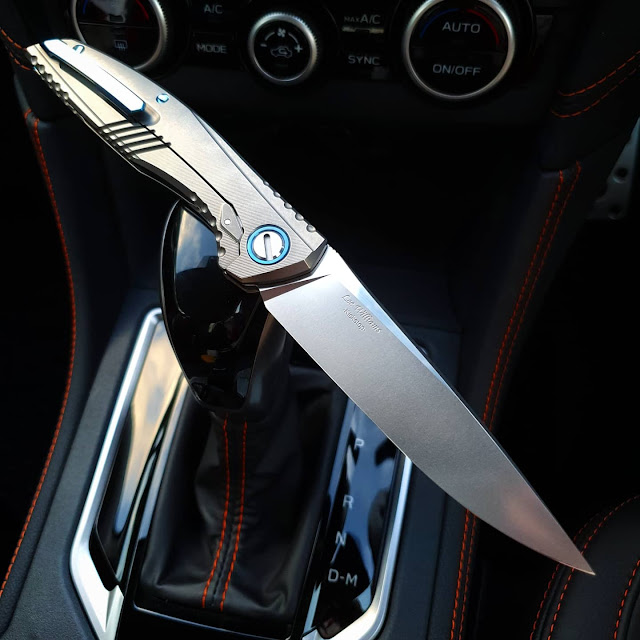 And ...Let there be light..."  Couple of full shots in my favorite picture taking corner of the house. 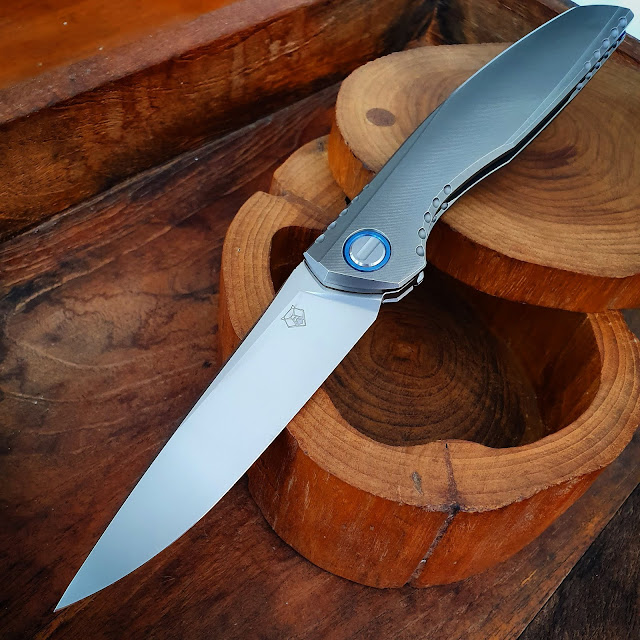 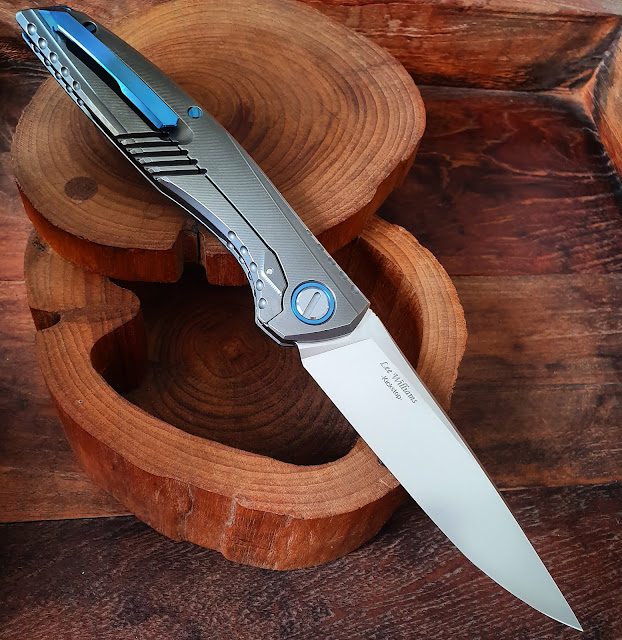 And I really want to focus more on the flipper tab. As for the Kickstop mechanism, more details can be seen on page 9 of this thread. It would give a good idea of how the nifty two part mechanism works to interlock in the open and close position..

The verdict? Best action goes to the 110KS and Quantum. Feel is almost identical. That solid resounding smack at lock-out, shared by the Neon 3D. 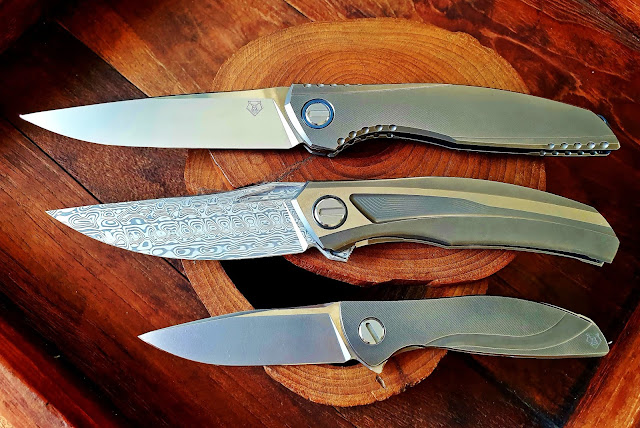 Already seen it in quite a few knives of late, the raised profile on the opposite side to the lock bar insert is something that got people talking. Personally I think it has to do with the insert screw.

As weight shaving these days can mean thinner material on locks, to accommodate for sufficient length in one tiny screw to hold up on what looks to be a sizeable insert on the inside, having that raised profile to accommodate for just that tad more screw thread to bite on makes perfect sense. 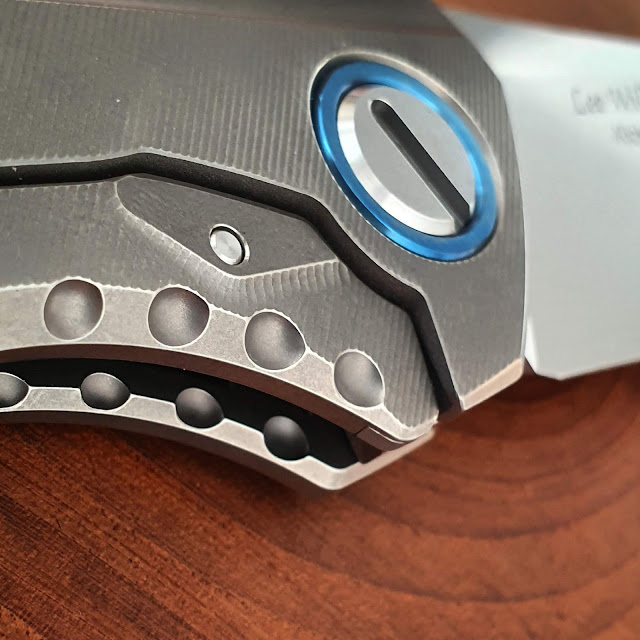 Final Thoughts? If a collection knife really makes you want to use it, I guess it fits with all the things you have in mind for a "perfect" knife. I am really tempted to break this out as an EDC... makes for a perfect steak knife with its length to width ratio.