In some of the most remote e.corner of the world when I was browsing for knives was this piece... The attraction was instantaneous. The rest of it's journey from Finland to Singapore is self explanatory... 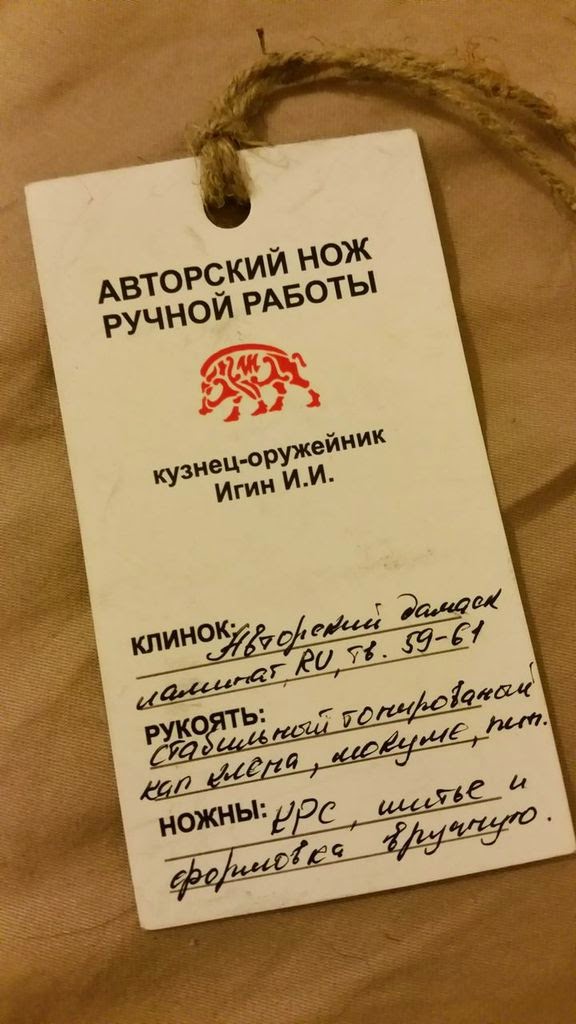 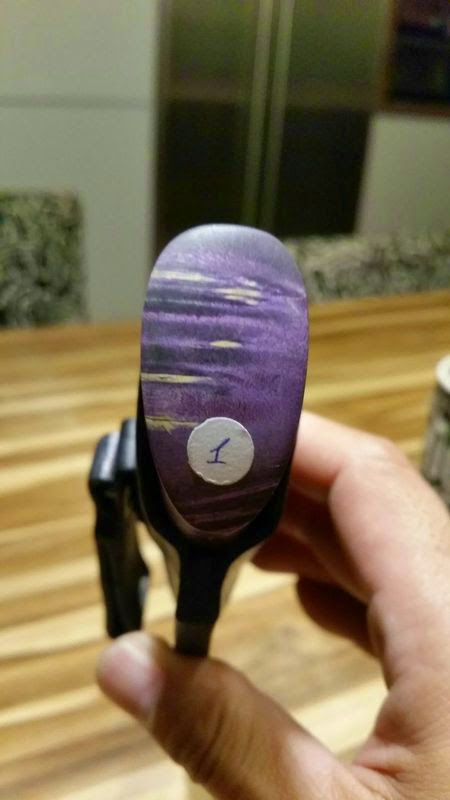 Of a total of six, each named and numbered as Igor Igin Knife no.1 to 6, this was number 1. Number 2 was an attractive Damascus blade too, with plain but soothing brown wooden handle. Very much more Zen-ish and logically should have appealed more to my senses.

Yet I somehow could not tear myself away from this one for some reason..

The naming might seem a little lame to many. I guess we are all so used to intricate carvings and numbering marks on limited edition knives, it's easy to snub a nose at it. 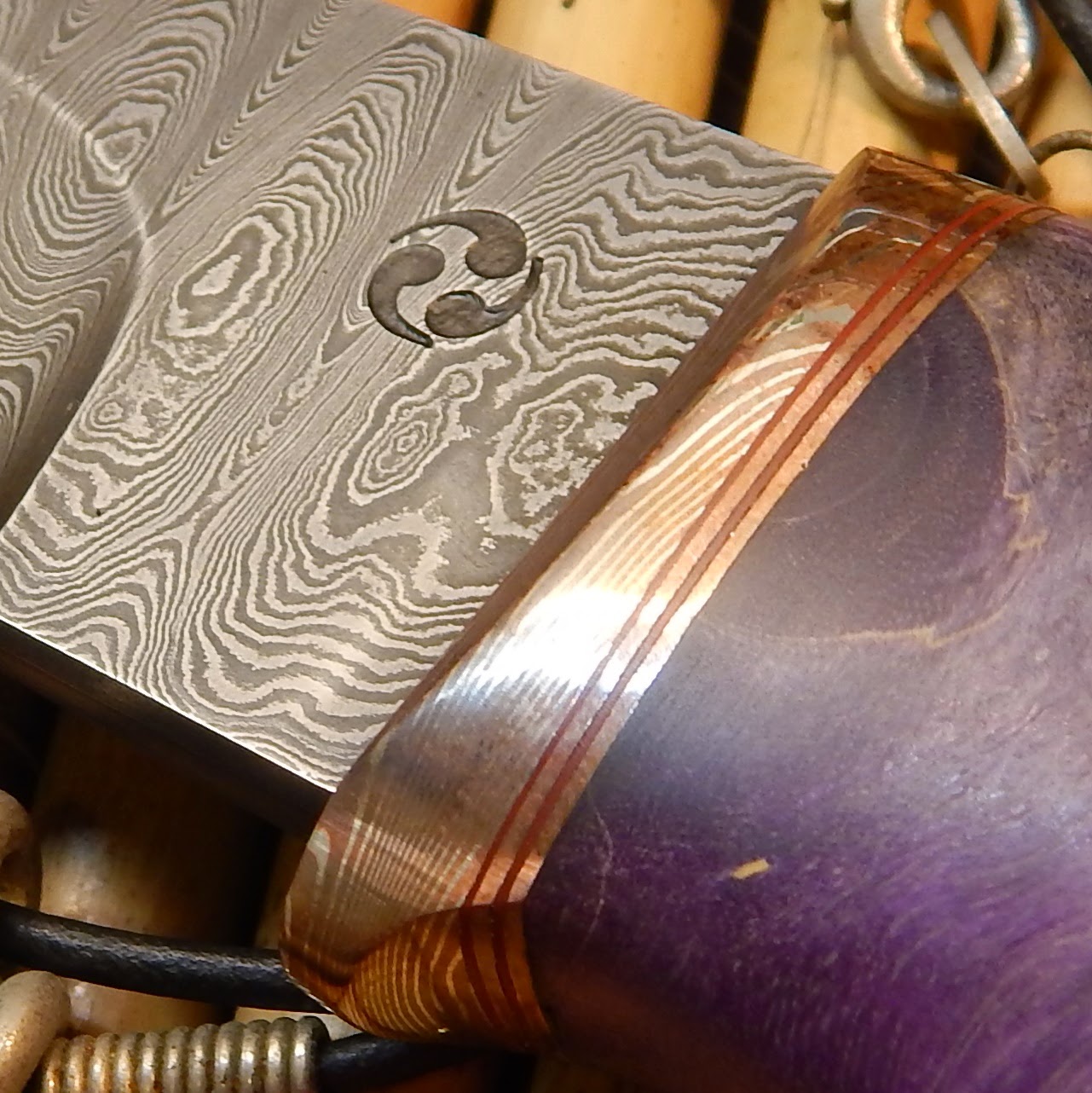 Is that a Mitsudomoe (三つ巴) symbol?

This, and maybe it's coincidental, the color and patterns on the handle would lend itself to romanticize on things Japanese.

The purple seem gaudy and did not appeal at first sight till I've enlarged the available pics to the max on my 40" TV screen... that's when something else appear in an over imaginative mind beyond colors....

Whatever the original intention, those magatama or "tadpoles" as I used to call them..adorn the left side instead of the maker's usual logo. Of course this triplicate whorl pattern has been used by many different cultures but they appear rather more frequently in things Japanese, at least for me. From family emblems; kamon, to the meaning of the symbol in Shinto Buddhism


A powerful image of cosmic forces at play. Entropy swirling within the purple handle... 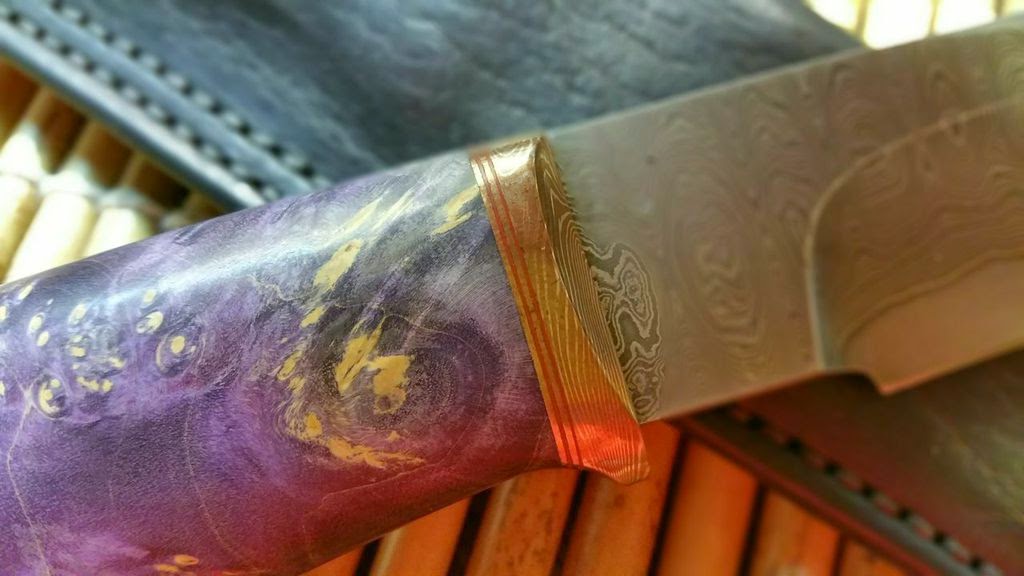 Raging cosmic forces only to be re-channeled, awaiting release, to fit within and exit through the confines of the copper/ nickel mokume-gane.

Exiting here, the flow changes yet once more as it comes to the Damascus clad blade... (yes it is 3 layers with an uncovered spine so technically it can be considered a San Mai Awase, someone correct me if I am wrong here).

Here I see a continuous process of "flow" in one knife. Everything chosen and the finishing put into it adds to the entire knife.

I do wish every knife bought or traded in my collection will come with a story be it a happy one or one filled with angst but for which I can smile down the road years from now when swapping blade stories with like minded friends...  There are already a few in my possession with a worthy tale to tell. However it would not really be that realistic to expect all my blades to fit in so nicely. For many pieces, the story will start with the knife itself, as in this one. Here is a  tale told through an imagery and memories that are somehow represented or encapsulated within the very knife itself. Certainly very subjective but to me, a story nonetheless.