Another article ported over from my left-for-dead Livejournal blog. Written on 11th Mar 2015 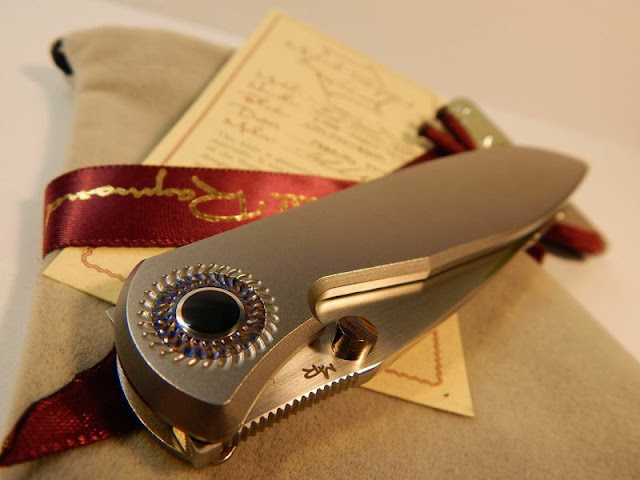 Michael Raymond Starlit - "Eclipse"
This must be the hardest knife till date in terms of taking pictures. Certainly no easy task to bring out the Timascus pattern set within the subtle contours of the beautiful clip on this Starlit "Eclipse"... and all I have is still my cheapo point and shoot cam.

Yes, the name, Eclipse is on the certificate itself. Something that Michael certainly didn't miss out. :) I'm really glad as the cosmic theme and eventually the name which was thought out as a flow to the word, Starlit itself. I wanted something different but connected. 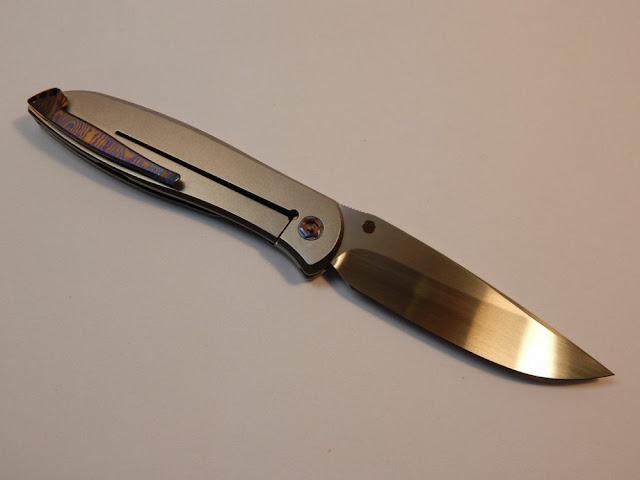 The Starlit runs on the smaller side of things edged in my possession. As a gentleman folder, for the kind of intended usage, there really isn't much of a need for anything bigger.

The Challenge
When my young friend ask if I was interested to take up a slot on an otherwise closed book for this grail, in all honesty it took awhile to decide. 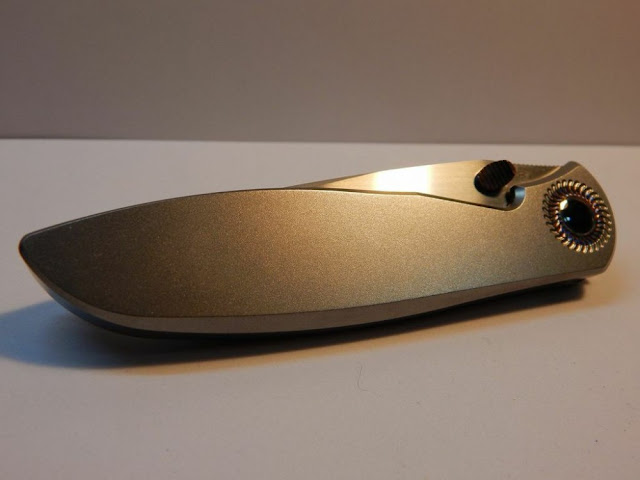 One look at any of Michael's works, it's about the elegance set within the simplicity of his folders. Master pieces from a perfectionist. Minimalist knives that are truly functional and aesthetically pleasing for all who love things simple and uncluttered. As much as I'm a minimalist, however for a full custom, it's only natural one will desire elements that uniquely make it stand out. Yet how to not "overcook" it in the process. 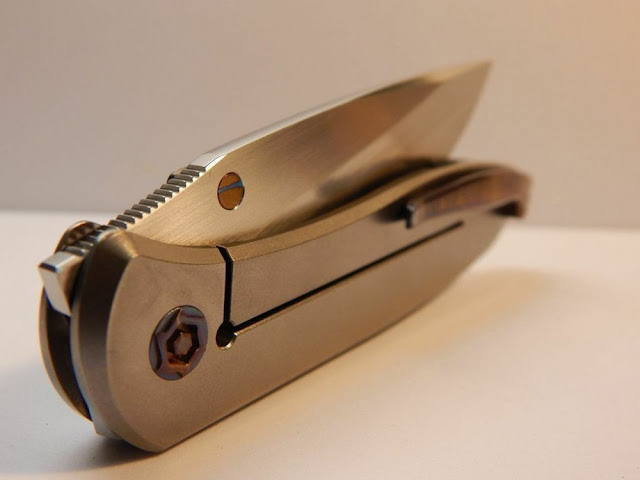 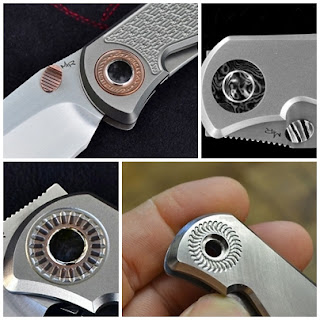 If it can't be conceptualized- then grail or not, it would be a no go. I think good knife makers are all artists in their own rights who can appreciate producing a unique piece to bring out only the best in their work.

Pouring through all the Starlit photos online... a starting point was based on a recent piece spotting a buffalo horn pivot cover with aged copper collar. This is a departure from the usual Timascus. Having noted the copper was engraved too, it opened up an array of possibilities in my mind.

Next Michael spring a surprise and came out with another piece of a "sun" radiating straight rays. Very nice but a little too Hellenic for me. More idea definitely started to flow though.

Then...  An option for spiral over the straight rays on the first "sun" was suggested.

Mind working overtime by now... Eclipse! Umbra or penumbra.. to follow like the copper one or have the horn as the collar? Some Photoshop doodling from my end and further exchanges later... ... A Star is born.


The most important thing was how would the end result on the Timascus turn out. Oh, Timascus was chosen for the fact that such intricate carving on this material would be a unique point. That's where I strive for a difference. Michael raise the standard further by having half of the spirals milled out from the handle itself!! Any mistakes or miscalculation and the result would be glaringly obvious.

As big and beautiful as it looks in the pictures here, the collar itself is quite small, which only increases the appreciation of the fine detailing in such a tiny area. 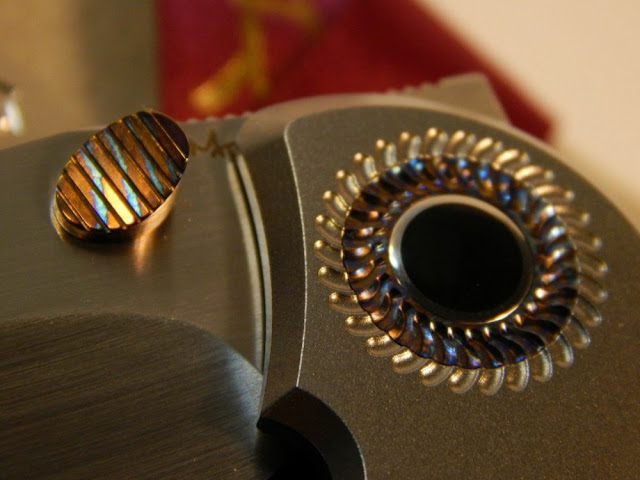 While envisaging the brighter yellow normally associated with Mokuti, the decision was left to the maker for best results. Zipper Timascus and the resultant darker hue than expected turns out with a very pleasing interpretation to this theme, evoking an even stronger imagery of cosmic forces. 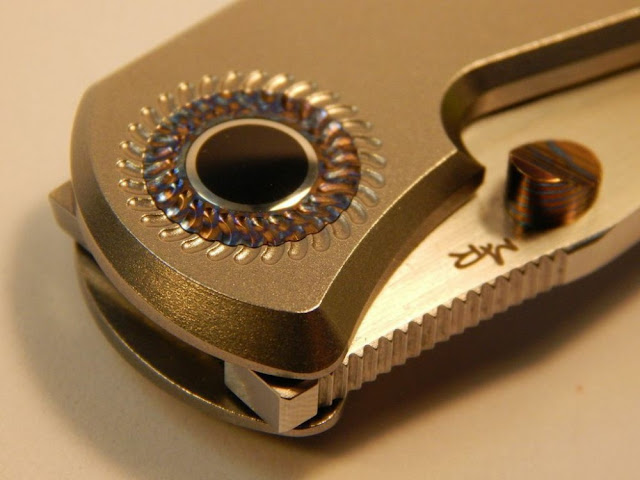 The signature star bolt was treated to similar hues like the "sun" side to match things up. 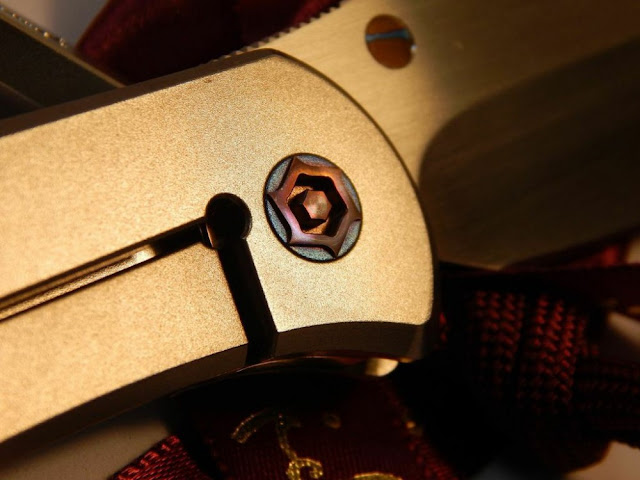 ...and the color theme extends right down to the next attraction on an otherwise simple knife. The clip. 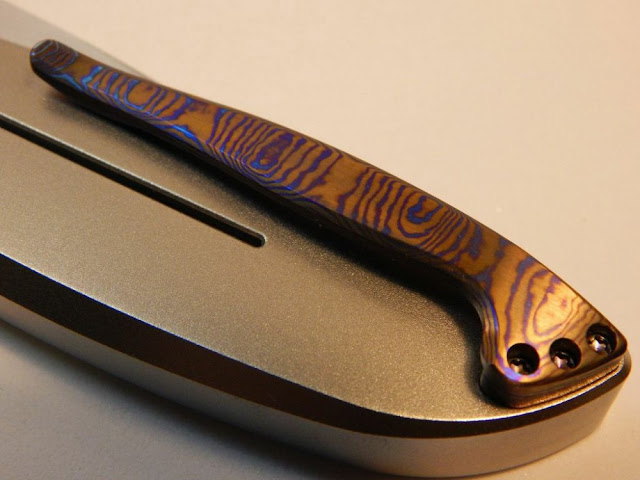 The Timascus clip was my request. Not something seen on too many Starlit. To increase the uniqueness? Sure it does but more importantly, it would seem odd without it. Sort of hanging off "incomplete" after all the attention given to the front end of the handle. Gotta admit part of it was influenced after seeing that copper Starlit that also had a matching aged copper clip. There's only so much originality my now constipated mind could come up with.

For the actual shape and ergonomics (if that is the right word) of the clip, it's really one of the best if not the best of any knives in my collection. The pictures are here for all to see but it truly has to be held and felt to appreciate how non-intrusive be it in the hands or when clipping it. 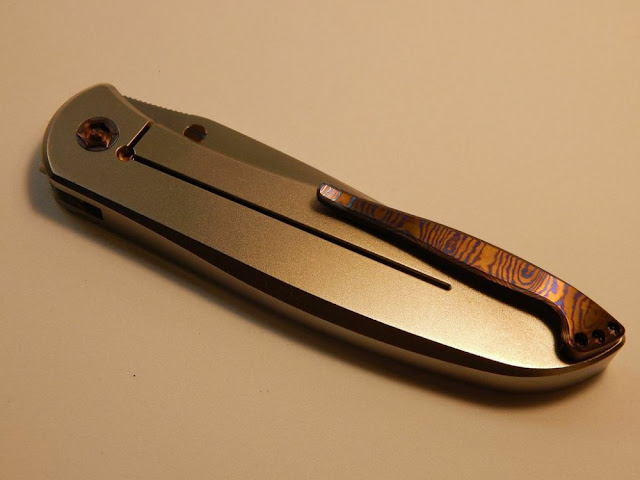 With so much focus on the "presentation" side, I have to say flipping over to the lock/clip side-- it is an equally impressive presentation in itself.

Ever pedantic over little things, I was hoping not to see dreaded silver screws heads peeking out from the clip attachment point contrasting inappropriately with Timascus that has been treated to a whole different color spectrum.

Not disappointed. Seems like many things resonate in the maker's mind and my own without needing to be spelled out. Screws were treated to colors matching the clip itself. 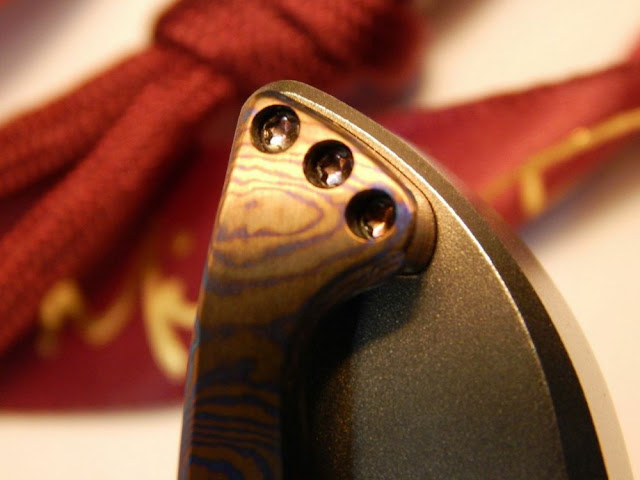 Tiny little area few would scrutinize. Yet in my book, it is these little details that sets things apart, truly making it worthwhile to be holding on to one of these.

The Grind
Just gotta love the swedge here and a meticulous grind on the rest of the CPM-20CV blade with a 62rc. From all that I have seen and read, there's no doubt the blade has been given the full heat treatment, cryo ,oil quenching and all- to bring out the full potential of the steel. This is one very important reason for getting a full custom from a good maker. 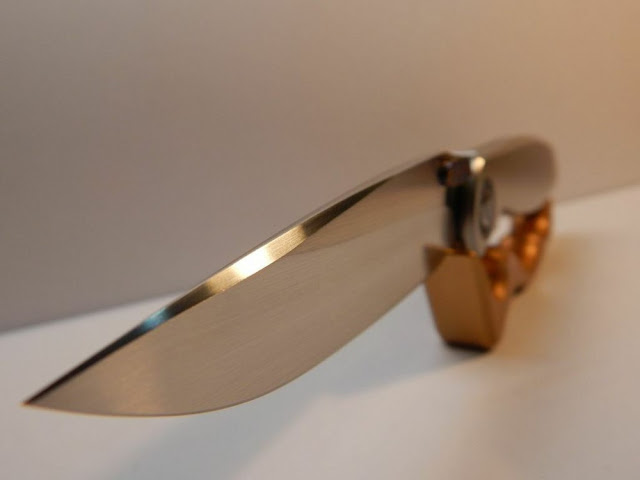 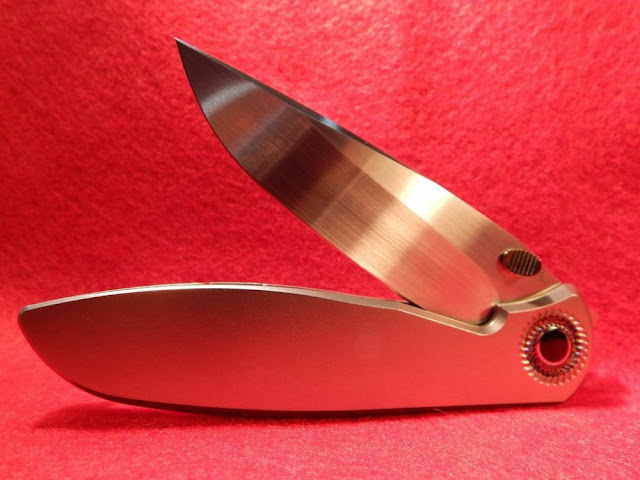 Is that a fish or some big bug eye cephalopod staring up at the blade?:)

Finishing... On this count it ranks right up there on my "best" list.
Milled out from a single piece of titanium blasted evenly for a smooth finishing that isn't too much of a fingerprint magnet. Not sure if it's coincidental but the wrap around chamfering matches up with the width of the swedge really nicely. Too thin or wide on either one would really have offset the look of the knife otherwise. 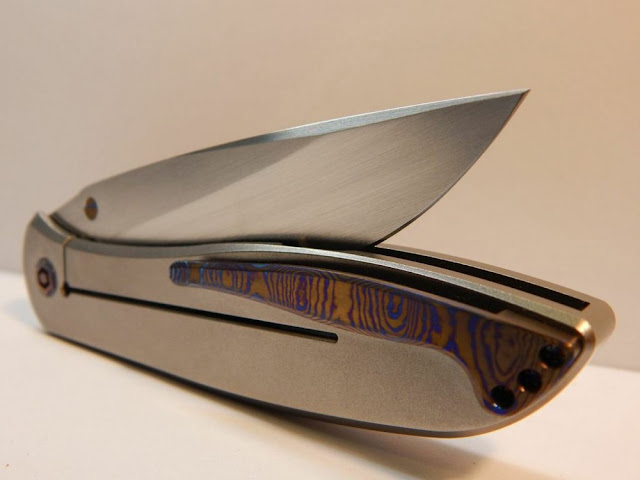 Just love knives that come sharp on unboxing and with a tip that gives an "ouch".


A thing I like when first seeing Michael's knives a while back is that they come with their own tool to disassemble or adjust when needed. Anyone with a number of knives using custom screws would understand what a pain it is to find a tool that can fit without mauling things up. 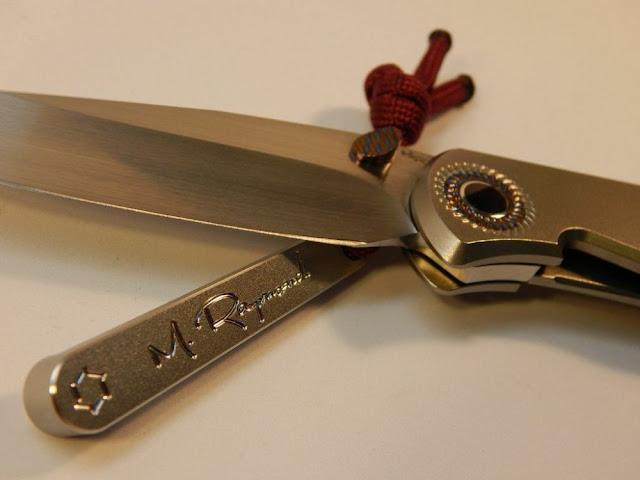 Proudly printed. As a "tool person" myself, I would say this in itself is a work of art. Functional art

Centering of immaculate knives where a maker's skill is never much of a concern. But like any review its almost a default picture to have. From a slightly different perspective... 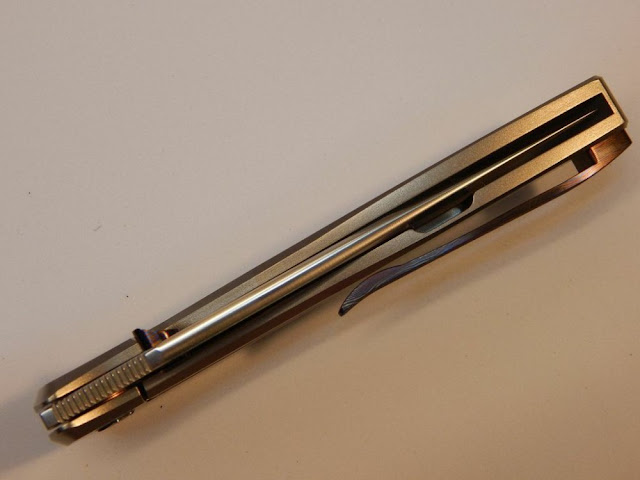 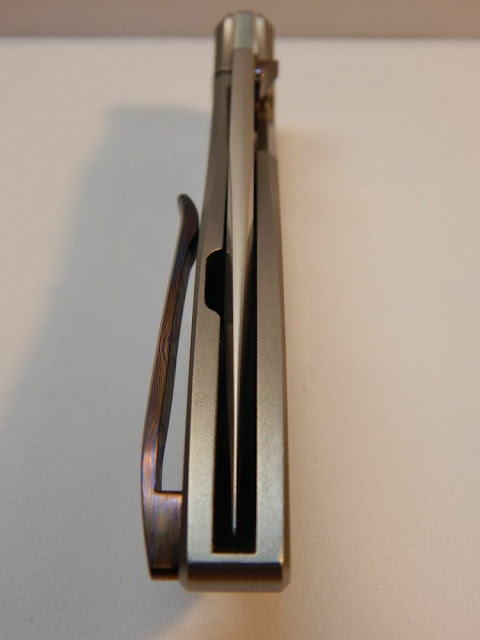 and here is the one that intrigues me... now how did the lockbar ever get in there. It's an integral, There's no observable patch up if it was inserted via the side. Was it milled out from the one piece titanium block itself? I think something was said on a forum thread before but really can't remember it now.. still its nothing short of amazing to me. 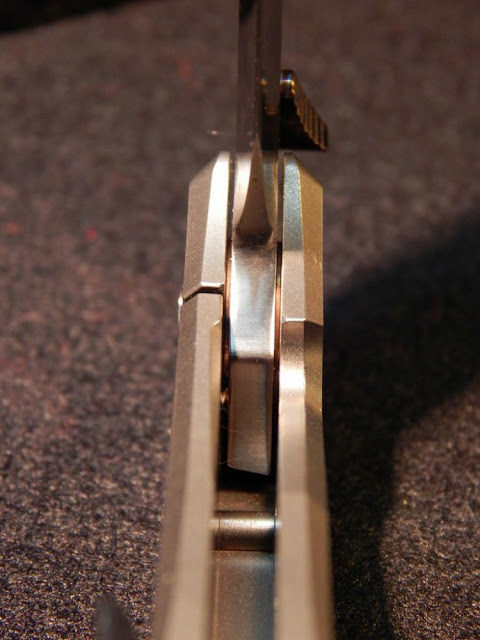 Nice positive lockup with no lock stick that can be discerned. Fine jimping affording a good grip but still looking refine as befitting this piece of exquisite work. 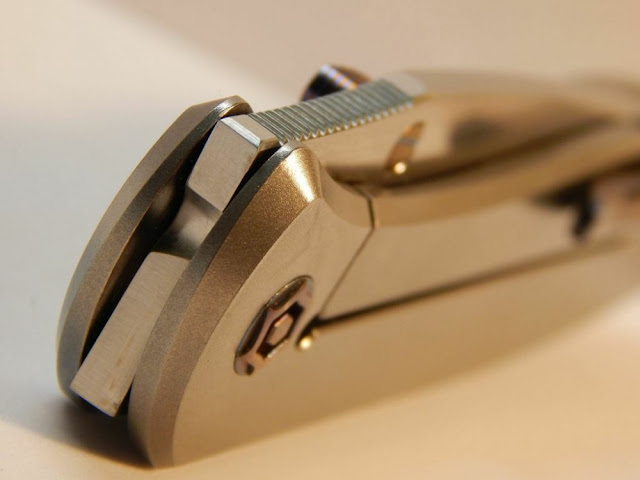 I'm glad to have made the decision and now to hold in the hand this piece of top notch craftsmanship. A story piece that has captured some vivid imagination of powerful chaotic cosmic forces, yer embedded within a calm and clean looking minimalist knife.

The Missus is calling. Dinner's ready. 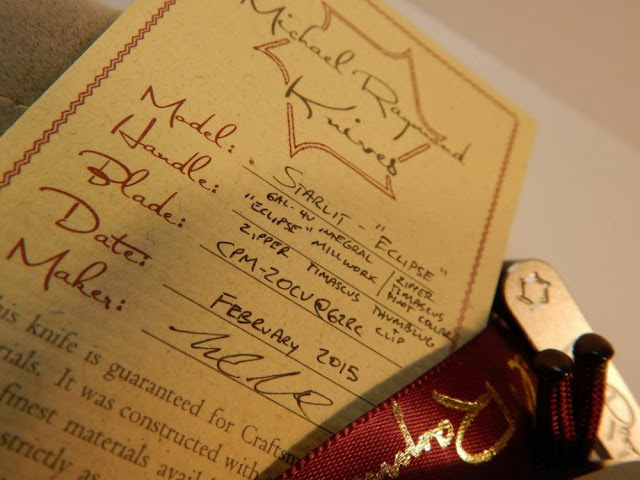 Update: Sep 2015 Blade Mag that bears the picture of this very knife :) 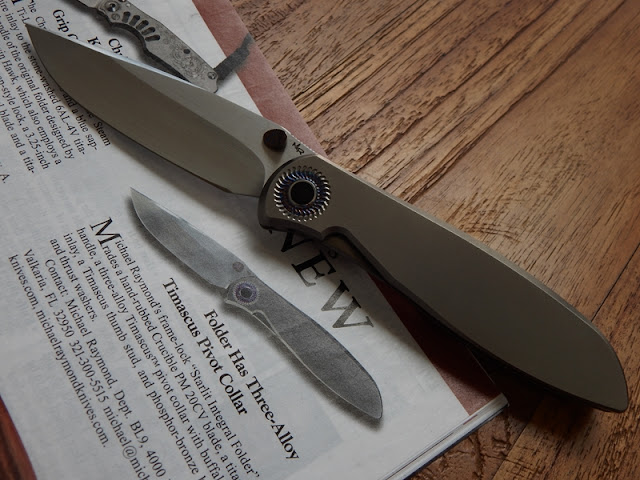