The turn around is quick this time from my last post. Why yes, this certainly would have been a grail for many and I too am incline to put it into my "BOG"- Box of Grails after possessing it for 48 hours...


To be honest a new knife wasn't really in the books for me. Like most folks the door frames in my house ain't made of solid gold ;) Well this came along as part of a sale/trade as I had to move some blades. While I do like the looks of Deryk's knives, I have not really done much research up till this point. Reading from forums, I know hunting for one wasn't easy as well. Long story short... foremost in my mind now is how in future would I even consider parting with it! Guess like a great many other knives, it just means it's another keeper. Oh well....

What's so good? After 48 hours and umpteen time of looking from different angles, I had nothing to criticize. Zilch, Nada, None. Neither do I have any constructive ideas of how this may be "improved" upon... a little mind game I play whenever getting a new knife. Quite frankly, it doesn't happen very often with knives that come into contact with my greasy paws. 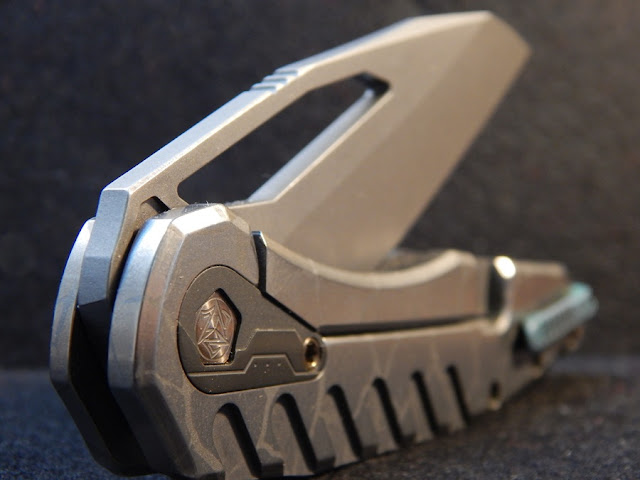 I don't know what others may see. As in most knives that strikes my fancy, there is a certain quality or imagery that is immediately associated when picking them up.  In this case it was "Steam Punk" and "Boba Fett"... come to think of it, those 2 would have melded nicely together in the first place.

And that's what I saw in this knife... tell me you don't see that "armored" badassery in  the above pic. But I think the key was also how all these came together without having the knife bearing a specific theme in the first place...

It's not a spankety blinkety shiny type of blade. Rather, it exudes a sense of aged-ness in the ghosting with a largely matted finish. Accentuated by the hues in the bronzed anodized bit and the "patina" clip + backspacer. If these were not intended -- then this piece is really a fine example of how randomness can come together perfectly. 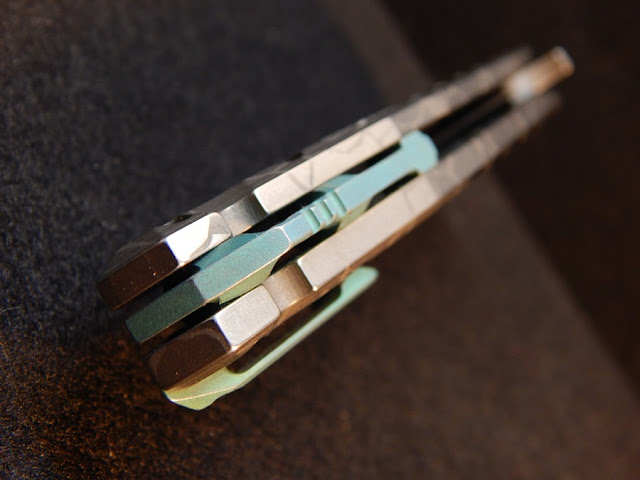 Most time for collection, the slightest imperfection or wear on a knife is a put off. Here the signs of wear from the slivers of green coming off actually looks much better and natural with the overall finish of the knife. Add on the angular contouring on the floating backspacer... "Ancient alien technologies surfacing in Khufu's Tomb within the Great Pyramid".. ok.. it's starting to get too Transformer-ish..

Back to the knife itself.. S90 flat taper and and coming in with a pretty wicked edge. Nice sharp pointy tip for a wharnie too. Cutting some packaging, I could feel a difference compared to some of my other similar sized S90 blades. Overall it just seems a little "harder". Yea I know that's subjective without going through an entire battery of cutting and slicing tests. 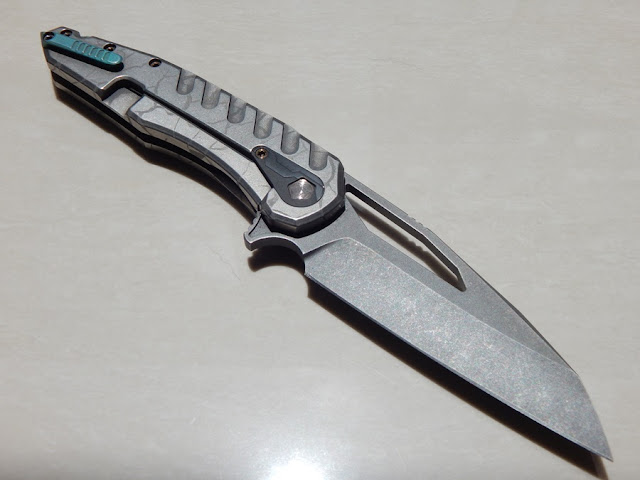 While I always like the super fine stone wash finish as with most of my Shiros, I would have to say the finish here, again matches the overall style of this knife with that rough-tough-tumble image better. Any smoother or a shiny sheen would really have put it oddly out of place. 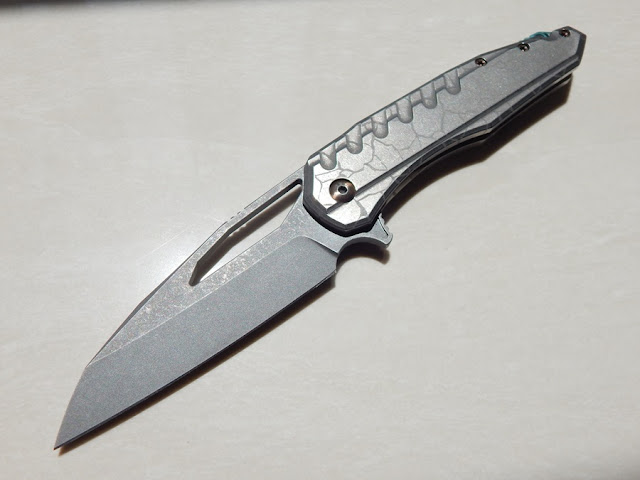 The jimpings on this knife are minimal but the reliefs cut into the handles are really one of the outstanding feature. Both aesthetically and for functionality of grip. When choking up against the blade.. I have not had many knives as comfortable as this one too. The shape and size of flipper allows sufficient space to back up on the tab as you sort of  "trigger-pull" and not hit the sharp back-end of the edge.

More than once in my posts it's been mentioned that even though I don't often clip my knives but the clip is really one of those things that can make or break a purchase/ trade for me. 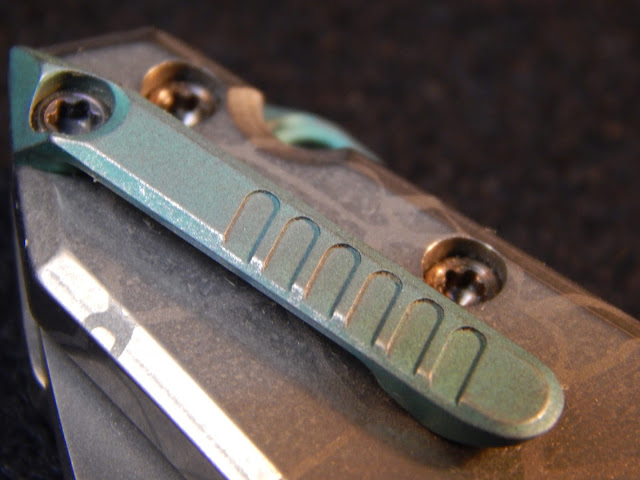 Here on the MKIII as with most of Deryk's knives, its a rather minimalistic feature and seriously I do like it a lot. Tension is good and details are not spared, matching up with the 6 U-shape milling on each side of the handle.

Another nice touch-- hardwares are all anodized Ti bits. While most pics taken shows the finishing on the knife to be the greyish-silver ghosting, in reality there is just this very lightish tinge of "bronze" under certain reflection of light. Only when held in the hand can it be appreciated with everything as a package. Not sure if it was originally there or somehow over time that's how things came to be. But in any case it's like a good cigar, well aged and mellow over time. 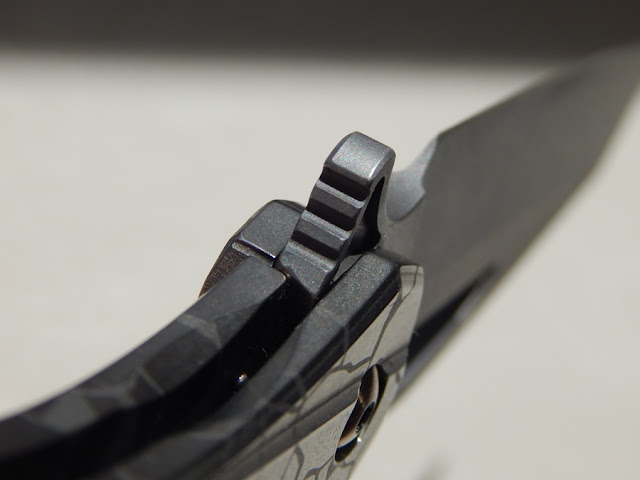 Of course the other important part is the flipper tab. It has just all things I look for. No big ugly dollop but able to maintain a good firing leverage to open the blade. No hot spots and milled in for that extra touch to complement the surrounding features. If anyone noticed- that's one big ass detent ball in this knife. But it's not finger breaking hard to flip it open and certainly smooth (actually ridiculously smooth) when closing. An attestation to it's position relative to the pivot, lock bar tensions and all are just really spot on in this little knife.

Excuse the next dusty pic but again.. that cool "mecha-noid" futuristic look really shows up in here. 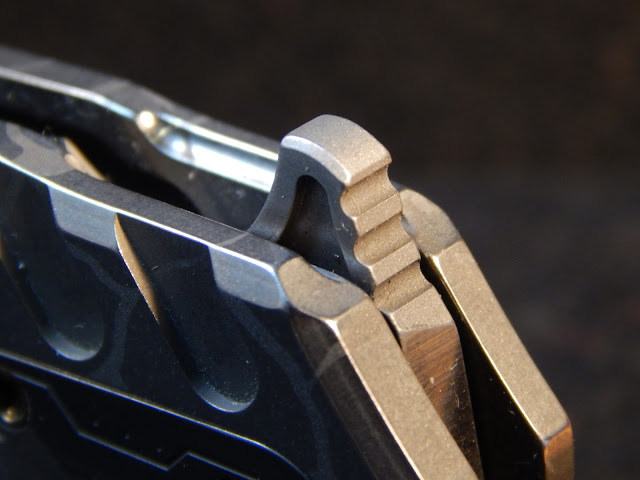 Well any "review" of sort has to end but where's those centering shots and usual default pics?

It's so nicely done- I can actually take an oblique snap and it wouldn't be hard to see... 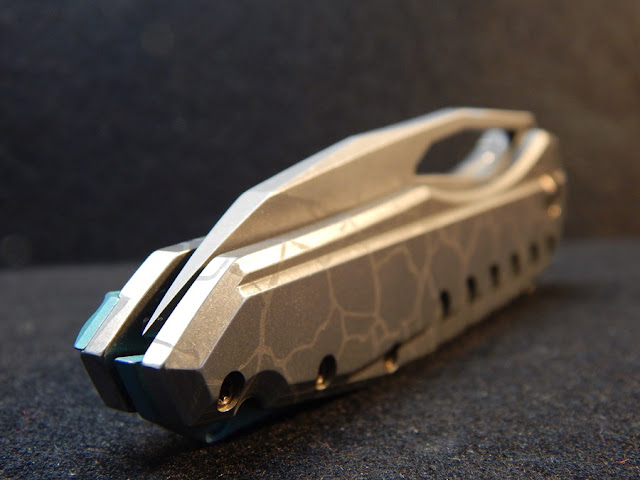 And to size it up against some of my fav and carries... 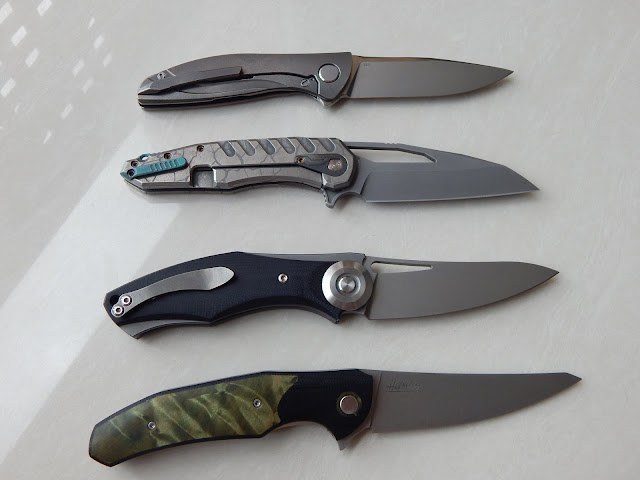 and of course-- best carried by some dude with CAF tattoos eh! 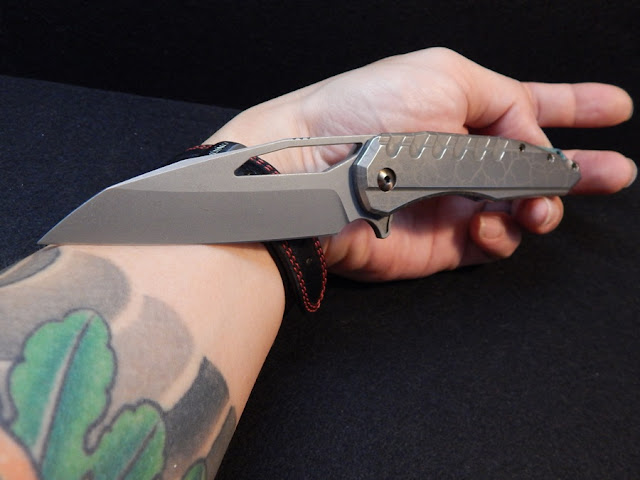