Woke up on the wrong side of the world only to find that the first serial production batch of Neons were sold out within minutes of being put up in Recon1.

But Lady Luck was smiling on me. Not more than 2 weeks had gone by and a Neon landed. Not just any but one of those rare pre-production limited run. Even after so many Shiros in my possession, this is one truly prize catch for a multitude of reasons. A definite keeper. 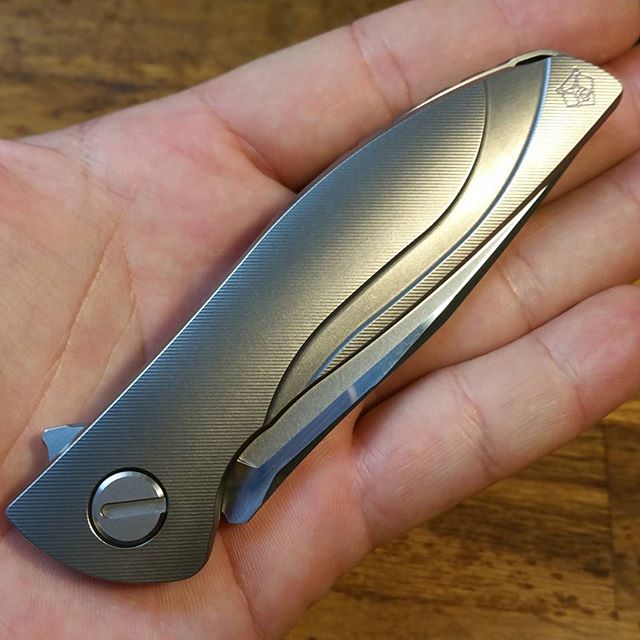 WARNING: Wall of Text and Picture Blasts
It's been awhile I've put up an epic post but with so much on this exquisite little knife, it's hard to keep things short this time


Much of the comparison drawn are with the serial production Neons, clear pics of those can be found at Shiro website.

Neon. Deceptive when first viewed from pictures. Even after reading it's a smaller 3.25" blade, the immediate image in the mind is to gauge it in the same sizing and hand feel capacity as its bigger "similar" shaped siblings, the F95, Hati and F3. In reality, nothing could be further from that.


How different is it from the serial production? ...was the next question I asked myself.

Again from a casual glance, many things would be missed. Not having the production model in hand, I could only go back to take a closer look. In the process gets to like what I have even more.

Normally special edition knives and production of the same model are differentiated by few differences be it a Shirogorov or most other brands, usually in the choice of material and a couple of design features.

Not so in this case where handle and blade materials are similar, premium S90V steel. Yet everything between the tip to the handle end of the knife is markedly different, making this a truly -- Special-- edition knife.

That's not to say that serial production are inferior in any way but it really shows the extra efforts to differentiate these 30 piece run.

The differences may seem trivial but from a collecting standpoint, there's much to be appreciated. 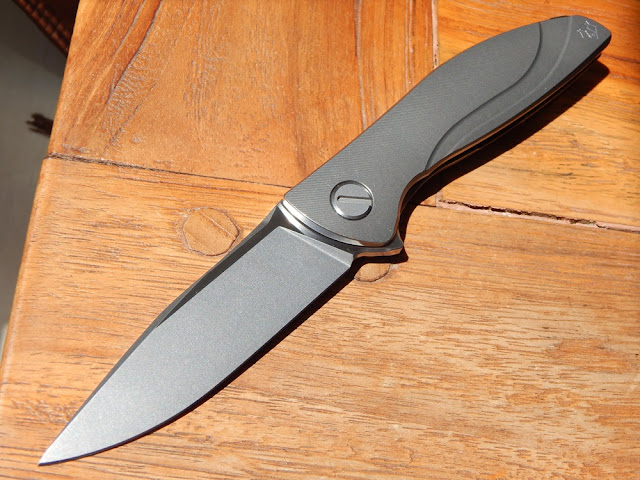 Blade and Grind.
Anyone who has followed me would invariably noticed that simple full flat, hi flat or hollow grinds are my preferred choices in blades, even safe queens. This preference first stemmed from a practical standpoint of being a user. However as the collection grew, an appreciation for nice subtle swedges that enhances the aesthetics of a knife slowly evolved. Compound grinds? They are some nice ones out there but as to actually owning them....  well maybe later. 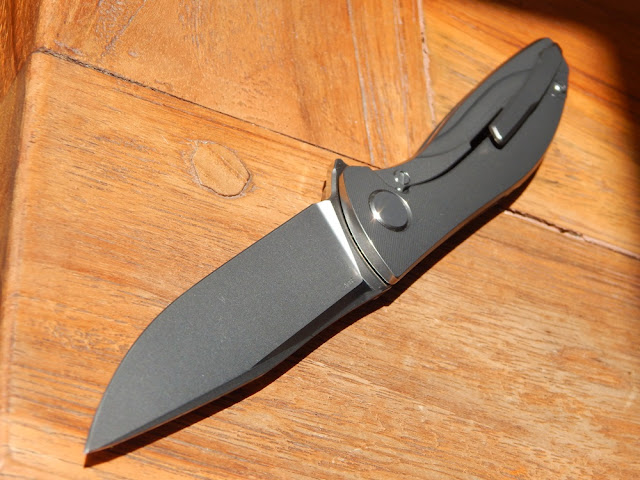 Back to the Neon...  Same S90V on both but a full flat with jimping on the serial runs. (edit 19 May 2016: just realize the serials also come in M390 apart from the S90 I saw earlier).
Here it's a tricked out milling resulting in a mirror-like swedge with loads of bevels, multiple angular grinds on a small piece of real estate. Considering that both length and thickness of blade are lesser than the usual Shiros, it's really quite an amount of work built onto the spine alone. Rich tactile feel running one's finger and watching the profile change while moving the blade in the light is simply mesmerizing.

Yet with this much packed, it doesn't convey a sense of claustrophobia or being overly done despite the size. Each change in contour is no more than a millimeter, flowing subtly from one to the  next... 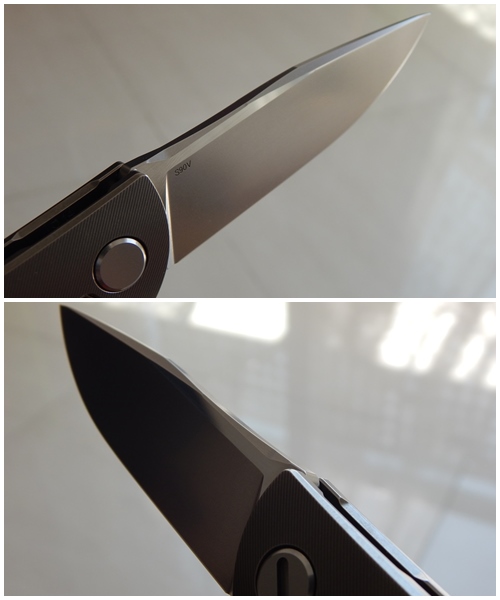 The closest to all these on a knife I always admired is my Cannabis Real but size wise with a nice swedge, it now fills a longing gap in the collection ever since parting with my Starlit 'Eclipse'. One knife I truly truly miss.

Another view on the Neon below. Note the minute "clipped" drop that's barely discernible from the main drop  starting at mid blade. A tiny detail that's only present here. At certain angles it gives a more mellow, less menacing look but the tip is sharp nevertheless. 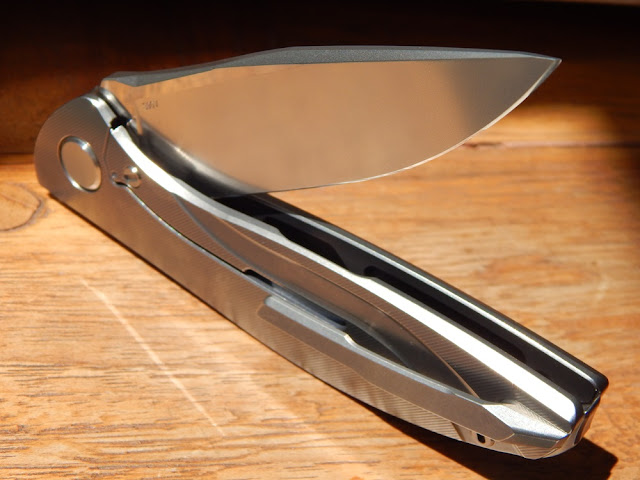 Excuse the dust on the pics from here on... just impossible to be rid of them where I live.

When first holding it up, the flipper tab look inadequate. Again look is deceiving. One flip and any doubts on the design/ ergonomics of the tab are dissolved.  "How does a Shiro flip?"- is probably the most redundant question for any Shiroholic. But in case any reader indeed still must ask... 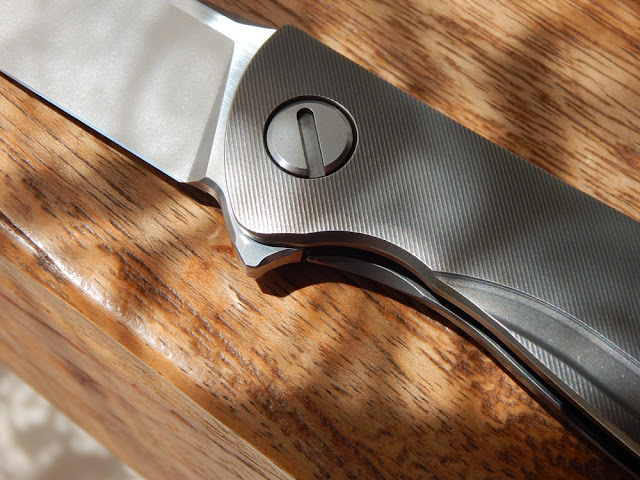 Having tuned a number of different Shiros, old and new, it has become somewhat of an innate ability by now which of those  right of of the box where it's against my own better judgement to tinker with them.

The Neon in hand needs zilch from me. Action is fast and crisp right off the bat. No dirt or lint to cause hindrance to the bearing actions.

Given the smaller size, that "bank vault" shut on closing was not expected on this knife. Yet the final few millimeter when closing imparts a feel quite different from the few MRBS I came across.

Just couldn't quite pin it down until realizing that this doesn't run on the double row MRBS like the production models!

This one is on SRRBS (Single Row Rod Bearing System). Given the length and width, I would say it is way more than sufficient and a very adequate bearing system on this knife. That mystery is now solved... Yes the action felt a lot like those SRRBS and DRRBS knives belonging to my friends. More resistance when dropping down but rigid, no flex and always smooth.


Back to the flipper tab... the protrusion is much lesser than say on a F95 or a Hati. It could be due to both the actual size, being smaller here and how much is visible when the knife is open. For lack of a better term-- it feels like a "semi-hidden" flipper when open.

The Neon is the gentlemen folder equivalent, a first of such in the Shirogorov line up. A subtle tab like this certainly fits the image and the intended niche well.


There's more to it though. What was thought to be a departure from the signature jimping on a Shirogorov flipper tab is again something found only here. Production Neons remain with the usual jimping feature.

In my opinion, Shiros have one of the best designed tabs in the business. Even on other models, they don't stick out like a sore thumb and ergonomics are always top notch, easy on the fingers. A criteria that has made me skip over many other knives in favor of my Shiros.

Still, a good smooth action on a knife is more than just the tab itself. Only the very best flippers, designed, produced and tuned to perfection can get away leaving a user with the satisfaction every time.. Almost every part of the knife especially the bearing system and detent placement position has to be integrated well with the tab for things to work smoothly. It gets more difficult when things become smaller, while needing to maintain the kind of leverage and initial force associated with bigger knives to let fly the blade. 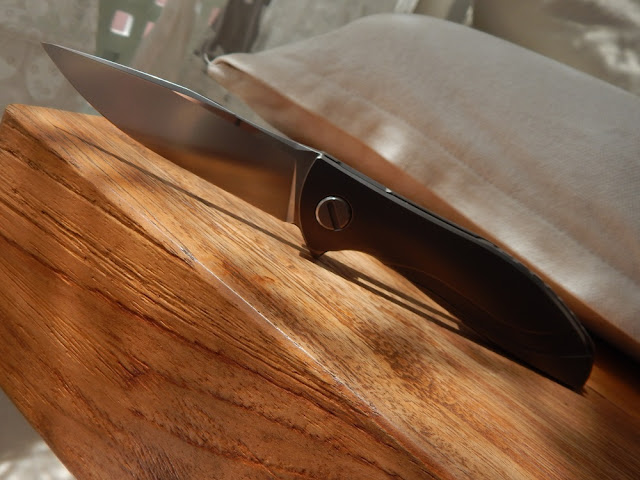 Many smaller flippers of this size opens with a hollow feel due to having lesser materials on the blade. In this aspect it is not pronounced in the Neon. Together with the much aforementioned swedge , the feel of having adequate amount of steel (normally appreciated when push cutting) imparts a svelte yet practical overall feel. I'm just really pedantic over such things, even if a knife is a  safe queen, it must give a feel that I have no qualms using when time comes. 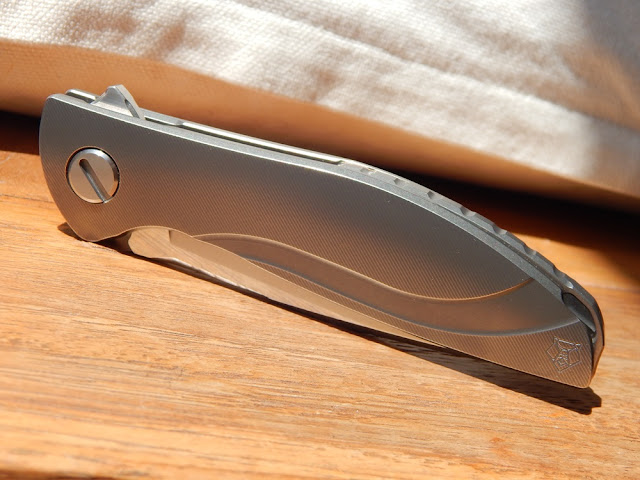 At first glance, the handle looks plainer and the fine milling lines might be missed. Running through the entire handle, it adds to the grip purchase. Great for a smaller knife which can be prone to higher chance of an accidental slip off the hand as it's being fired open.

The surface on the handle outside of the milled out channel is not flat but has a very subtle and consistent contouring that can be felt rather than seen even when holding close up. To match up the simplicity on the presentation side, the back screw is on the clip side as versus having both screws on this side as found on the serial Neons. Again another small but differentiating aspect on this knife.

The 3D clip is simple looking, keeping in line with the rest of the knife. Even the screw holding it secure is a flush one installed from the inside of the handle. None of the sharp edges or discomfort to the finger when pulling it out of the pocket. 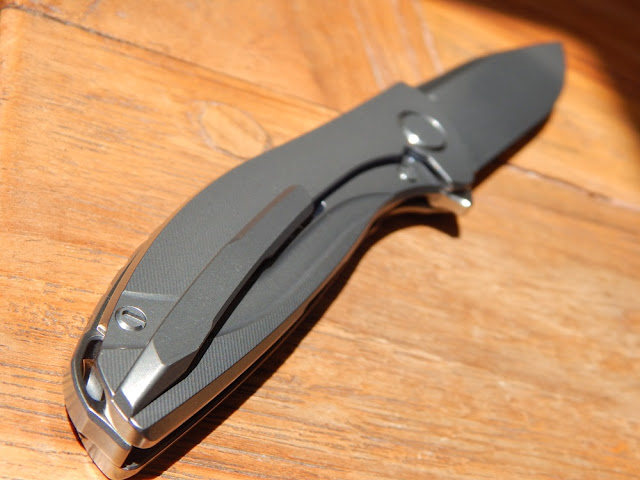 Customary shot on the back-spacer, centering and lock up. Pretty self explanatory here.
1 screw pattern for all the Neons including the one on the lock bar insert... something different from the rest of the line up. 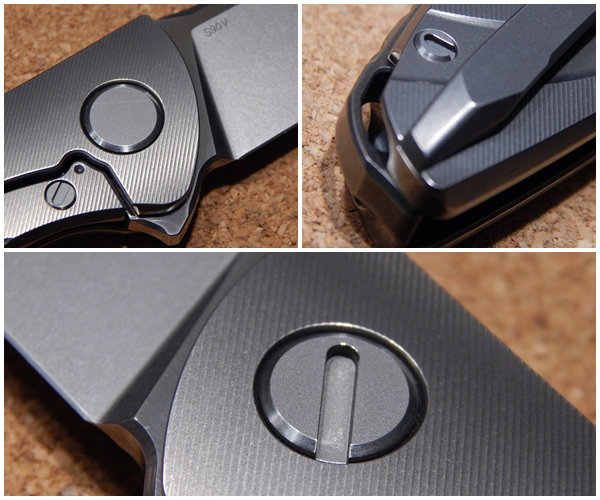 Last Easter Egg found!
Thought I would have spotted all the difference by now only to realize that the inner side of the handles are actually skeletonized like Custom Division knives. One of the pic had what looked like a smudge.

Nope.. there's something else engraved, a stylized bear head logo with a number, again like Custom Div. Not at the bottom but facing the SRRBS logo though!

Grouping them together.. it has all the things that's present on a Custom Division but it's not classified as one... Hmmm ;) 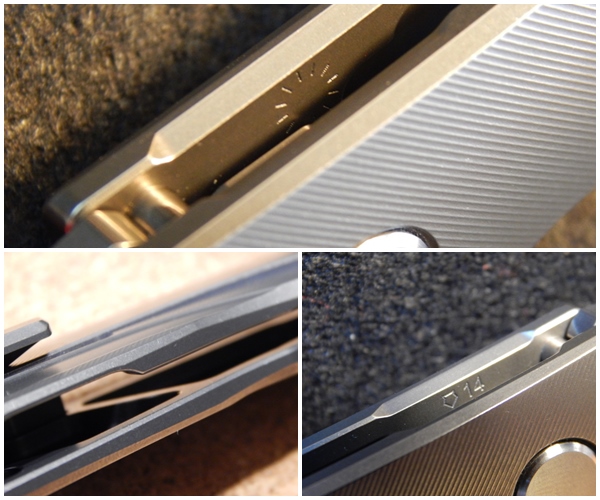 Verdict?   A definite keeper.
The next best option-- stay tune and grab the next run of serial production when they are out.