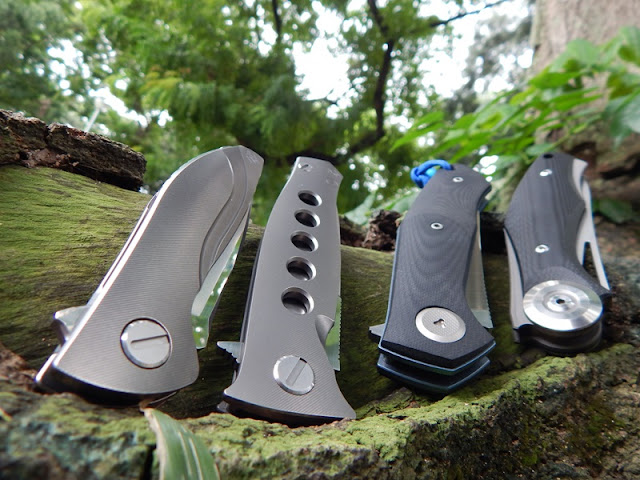 Trying to get into my short-story "writer's mood" in the previous post probably wasn't the best idea. So here's the full scope of what's on my mind yesterday.

Enjoying the last afternoon of a 6 day break... nothing really beats a quiet mid week outing with the Missus and why of course everything these days include our 4-legged center of attraction.

I was as usual hoping to snap a few worthwhile shots while out with my things edged. Short of having them with me physically in the event that some maybe sold, a camera is really the best time machine like a good friend said, to capture as much of these apart from the knowledge of what's embedded in our memory.

An earlier conversation in the morning about the Dark vs Cannabis Real with a friend, expanded a little as I thought more about it to include a comparison with newer models


The 'new generation' special editions (or that's how I see them).
and 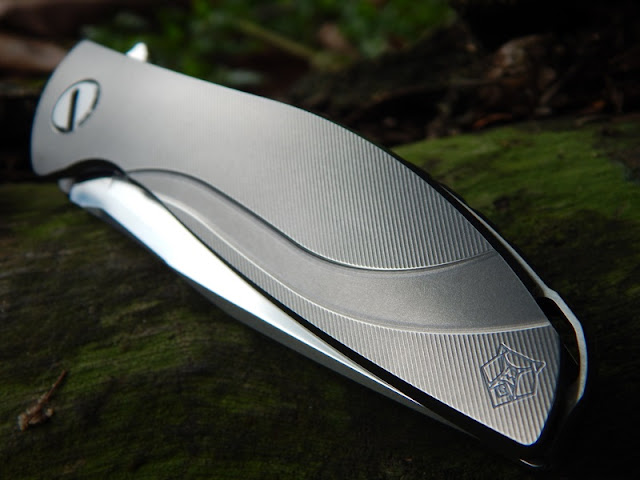 Slim seems to be the new catch word on many Shirogorov knives these days... Something I observed was voiced by many about desiring smaller and or lighter knives. It took a while but it was certainly responded to.

Sleek lines chasing a whole slew of milling artistry from inside to out. Much refinement can be seen in comparison to older models and most noticeable when holding these in the hand. Before the Russian Dr Death (RDD) came along, I attributed that feeling was due to the much smaller size of the NeOn. But with the RDD, quite clearly, the familiar feel with my other Shirogorov knives had changed. The earliest as I recall now was holding up a friend's Custom Division Nudie Slim.

Comparing to these two below might seem a little skewed but it's not about whose design is better that I was mulling on today... Having mentally categorized the Dark and Cannabis together as the "older but not earliest Shiros" from certain observations, first it was the "evolution" of hardware. From more common industrial hex screws to custom milled pivots and adding of complex swedges... 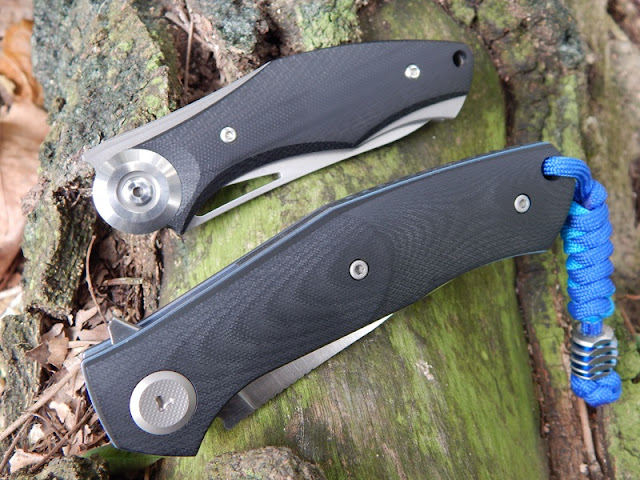 ...there also exists much variations in the contouring and profiling on otherwise flat scale materials in these earlier collaborations/ limited editions. Being a total noob at the time I got the Dark, I was cued in to these profiling delights by the then owner, my good friend Koji-san. 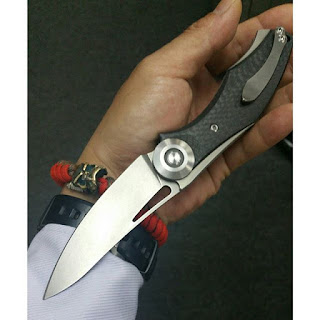 Though not always as I later found out when I got to see a second piece of the Dark..  the CF S90v model which is a more flat 2D-ish  kind of handle. Again putting design aside, the chosen carbon fiber and a finer finishing (I think) the feel when grasped feel both physically and mentally a little more like today's newer slim generation of NeOn, RDD and CDs. Only the early spring clip would elude to it being an earlier knife.

Here on my G10 version however, both these knives, quite clearly exhibit the aforementioned rich textural feel. Something  I tell many folks who messaged me "You gotta hold it to know it."

The Cannabis Real is truly one of the most ergonomic blade I ever had in hand with a hefty enough blade to tag along. I only wish there was a cheaper serial production to grab and use all day, everyday.

Such preferences are really subjective though. For the slim and weight watching crowd, it may just seem a tad bulky. 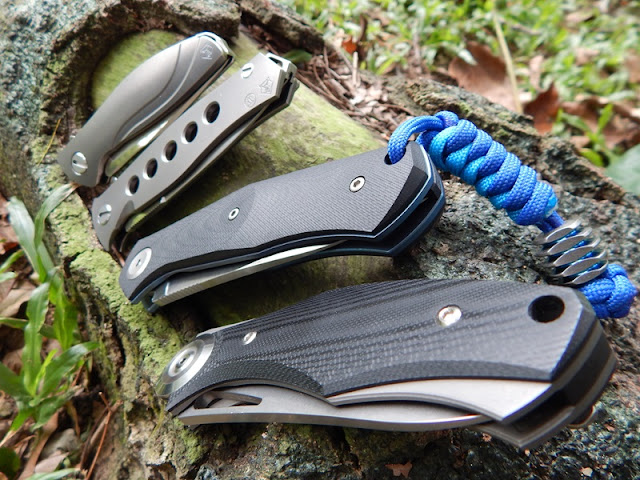 Back to the new stars of today... 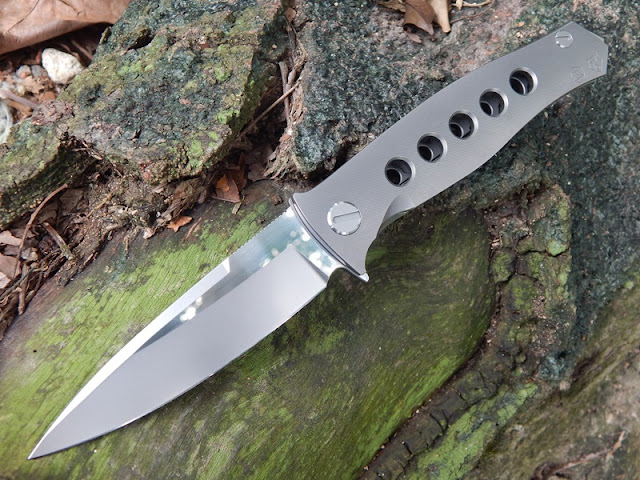 What's really attractive are the finishing. Shirogorov in my opinion has some of the finest stone wash surfaces. Of course parts of those bells and whistles lies in the polished sections of the blade. It's not only the de-facto standard as in many higher end knives but they serve to bring out the shape of those lines on the spine and most importantly, (I think) the blade tang.

Hidden under the handle-pivot area are those mirror polished surfaces to gel with their latest rod bearing offerings. Be it single or double rods or rollers as some prefer to call them, represent increased surface area over balls. Mirrored surface would reduce friction, or so is my simple logical deduction of these things. 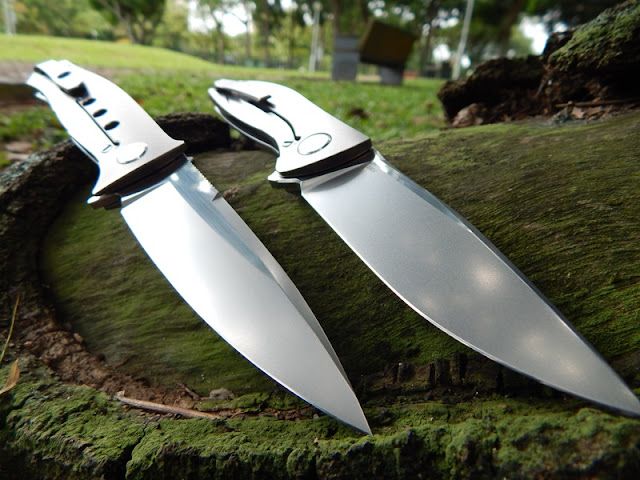 But there are always some old school charm whenever picking up the earlier knives. The Cannabis sometimes feels like that "missing link", a term borrowed from Evolutionary studies. It bridges many gaps from the way I look at the early Shirogorov knives, not just collaborations but also the earliest models like the Dertnick and Tarbagan to the early serial productions, 111,  F95 and subsequently Hati and F3. 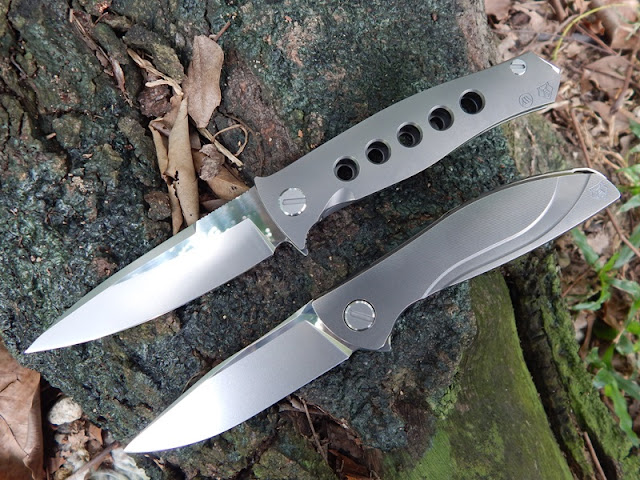 The question I heard being asked would be.. "Well, what's better, old or new?"

I'm afraid the answer would be disappointing. As a true blue fanboy, I like them all.
Putting each in the respective time frame they were produced while weighing how views and ideas of knives had changed... each is really a work of functional art.