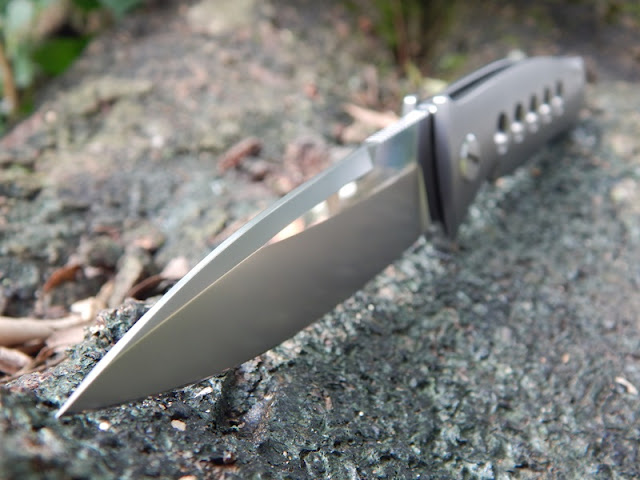 It's been up on the last couple of posts but guess it's time to pay a little more attention to details on this one...

Russian Dr Death. A Shirogorov collaboration with Tom Mayo this time. A first.
Any knifenut worth their salt wouldn't need any introduction to these 2 names and I'll try not to repeat information already readily available online on this. As usual, it's about what I see and in comparison with close knives (or as closely related).

My experience with Mayo knives again has been through the courtesy of my good friend Koji-san who has quite a few (and nice pieces) representing the maker's early work and of course there has to be a Dr Death or two in there. 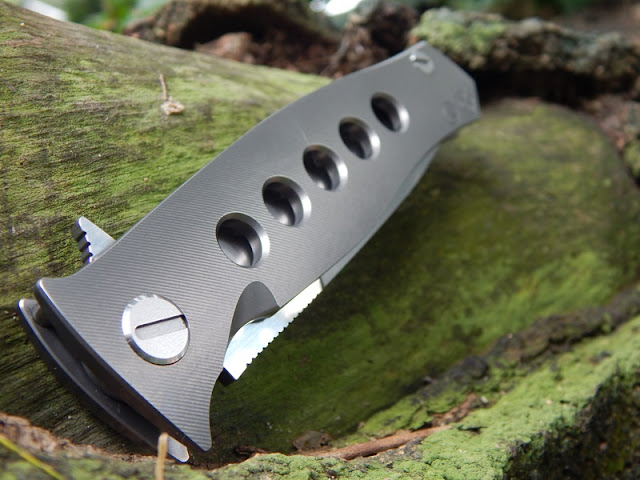 The "new Shiros" with their slimline profile, characteristics which this collab has taken on makes for a familiar size feel to the ~"3.5" Mayos I fondled. Then of course there are those familiar "Mayo holes". However in many other aspects, it's also unmistakably loaded with lots of Shiro-ness, yet it's just not quite the same.


The play on symmetry is very much evident on this knife. Moving from those aligned holes on both sides, the distal end of the lock bar matches the curved out ends on the handle 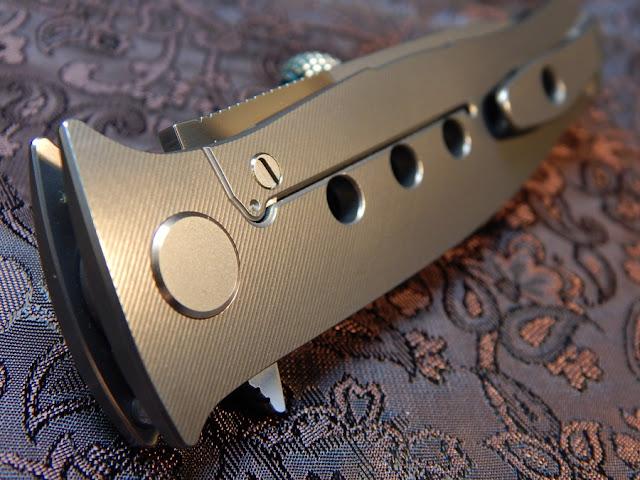 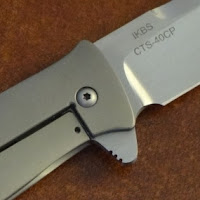 Over at the flipper tab, looking at actual Mayo knives, the tab is generally larger and forms a flowing line with the end of the handle when opened, which gives it an imagery of a guard as found in many fixed blade.  Here on the collab, that is given the Shirogorov take, distinct with their flippers - flushed and in line with the handle for a good fraction of the tab before the rest are exposed. You get only half a tab or less sticking out, like the NeOn.

To achieve that, the forward jimping section has also been shaped differently with a pronounced concave. Aesthetically it is pleasing.

However, the resulting action due to the ergonomics is quite different from the usual Shiros in my possession.  For now comments on the actions are reserved as the knife will need some more breaking in.

Lock up and centering is really great on this knife as far as these two aspects goes. The lock inserts are almost invincible, well hidden away at a casual glance. 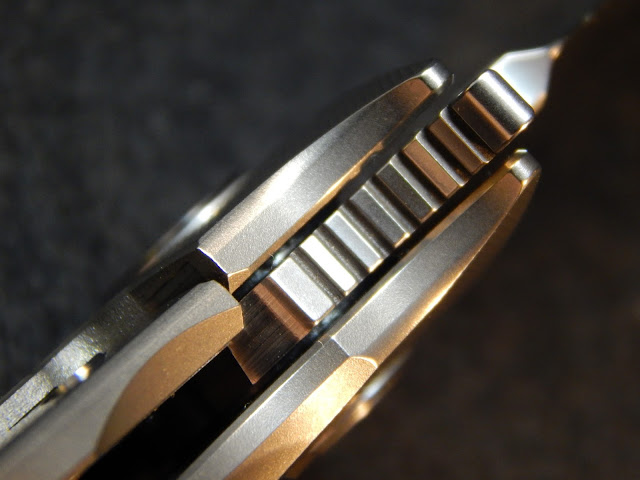 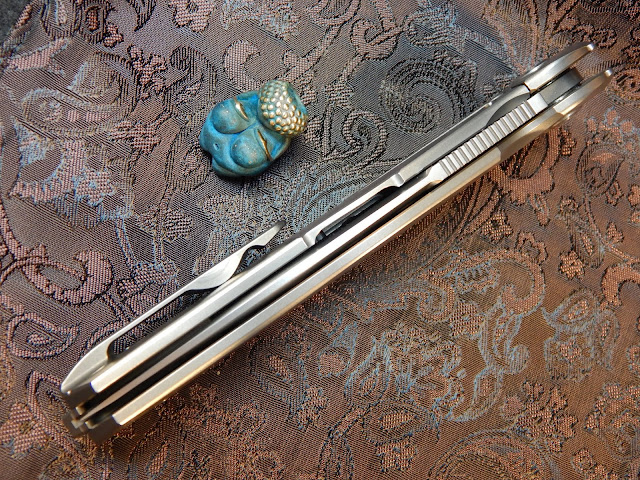 The angular rear have been stepped up  a little with the extended backspacer that doubles up to form the lanyard hole. It is not the first time something like this has appeared on a Shiro, offhand I can recall the 111 has something similar but half hidden unlike here. 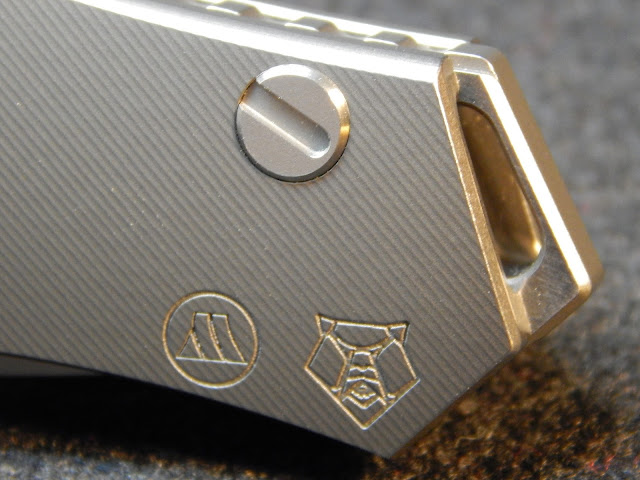 The RDD also sees a full max out skeletonizing of the inners. This one seems a little more complicated than most of the inner millings seen so far on Custom Divisions. Owing to those signature Mayo holes and the need to accommodate around them. I am dying as usual to fully see the insides instead of just peering now with a flashlight :) 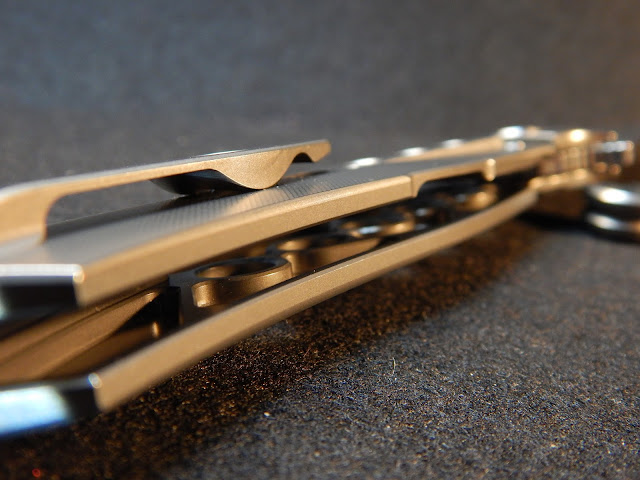 Another view
As with all Shirogorov collabs so far, indication of steel type is always engraved on the inner side of the handle near the front  to keep a clean look on the blade. 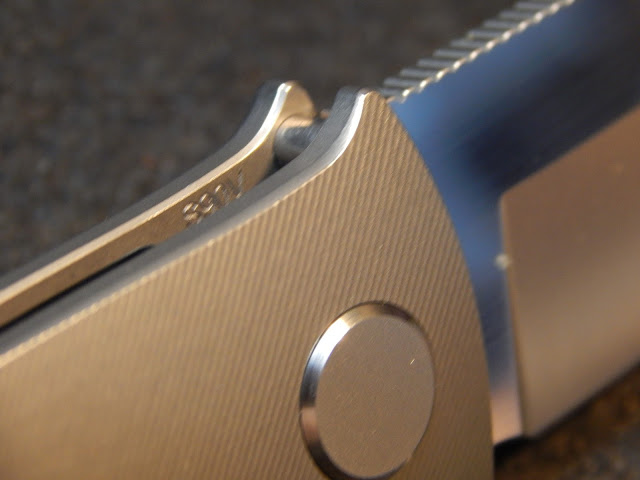 I read that it runs on roller bearing and just assumed it would be SRRBS as DRRBS is only found on full custom work except for a batch of CD Hatis so far.

Here comes the mystery... the symbol is unlike anything encountered before and I have pretty much seen them all. As of this writing, I'm trying to find out what it is, definitely indicating some kind of  rod/ roller bearings but it's neither the usual SRRBS nor DRRBS...
(UPDATE 16 Feb 2016 -- the official answer from Shirogorov is roller bearing with steel washer plates) 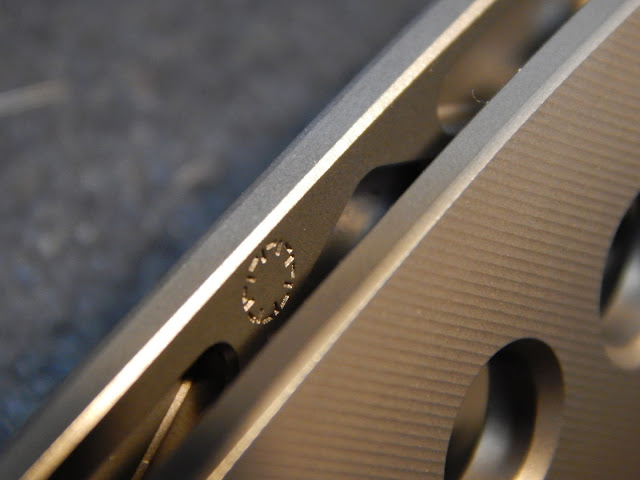 Comparison Trivia
Sized up with a F95 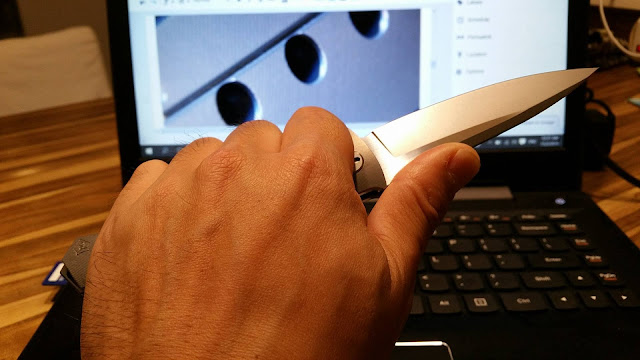