Since comparing the older round tang F95 with the newer angular one from awhile back, I realized that the round tang ones doesn't seem to be as stiff. This was maybe why it's shape was later changed as the F95 evolved?

Here is a pic from my earlier comparison... 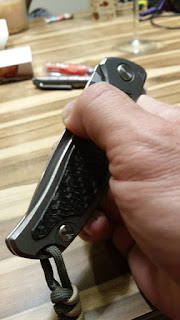 The older knife has since been my edc. One problem was always it's centering. Seems that with less material to hold the pivot sandwich area and the lock pushing in from one side, the blade seem to get pushed slightly to the non lock side.

Torque on the screw can only have so much adjustment as it is pushing down when tightening and is on the lock side. The "pull" on the screw threads against the female portion of the pivot seems insufficient to me. A very common issue seen in various screw application. Size of screw head, contacting surfaces, thread pitch and screw size can all play a part in these matters.

Any over tightening results in a very noticeable binding... translated as a blunt draggy serrated feel when opening/closing. The other thing was it kept loosening up with every 30-50 or so flips. Tuning it the best I can and properly tightened down... the blade can be pushed with noticeable movement to one side when fully closed.

The standard method would be to apply loctite-- a thing I always try to avoid in my knives and it still certainly wouldn't solve that blade moving when pushed. There is a very fine line between no play and centering. With the pivot screw coming loose, it meant constant adjustment especially with the frequency I carry and use this knife. No big deal, most time it's just tightened back with a coin.

I accidentally flip the pivot on my Cannabis Real awhile back, only to realize that pivot adjustment was a lot easier and it help to smooth out the already slick action of that knife even more. The push-pull action on the screw thread of the pivot dawned on me while recalling to things I fixed on my bikes. Finally putting 3 and 3 together tonight.. I flip the pivot on the F95 tonite.

Bingo.. First, centering was a breeze just like the Cannabis Real. The tension adjustment just about "automatically"  fall in line as well. Gave it 50 flips.. Still dead centered. 70 flips.. slight twitch towards the presentation side now but slight turn brings it back to center. 3 sec adjustment and pushing against it when close.. no discernible noodly movement like before flipping the pivot.

Ok now maybe I am ready to stick a bit of loctite -- or  alternatively use the teflon tape trick.

About the "new" F95.. its actually an even older one that runs on the smaller pivot that has a set screw. I did figure out how to tune it. It's a little different from these newer (bigger) pivot Shiro uses now but will get to the tuning of that knife another time...

My preference of  Teflon tape commonly used in plumbing over Loctite for knives is simple. Both function to keep screw threads from unraveling. But the latter is a lot quicker to work with.. no need to wait till dry (you can don't wait for Loctite to dry too but taking it apart later is gonna be a PITA, especially with pivots where one side has nothing to grab onto and there comes all the heat gun and hair dryer to loosen things up) 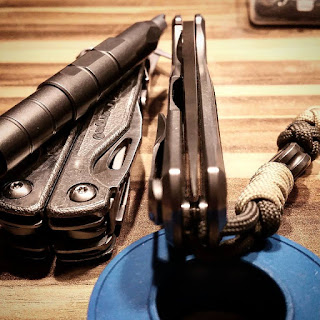 Gave the knife a 100 or so hard flip. Nothing moves out of place nor did screw loosen this time. At this point I could probably flip the pivot back to its original orientation but then with the ease of centering now, I'm just gonna leave things as it is... Let's see another 2-3 months from now how things have held up before the next maintenance session.