And Dragons Gather... Introducing the IFS-20

Still in the midst of writing up my latest grail acquisition, another mega excitement surrounding edged things in recent months culminated in  awesome gatanhering with Snecx and his brother from Malaysia. Of course my resident knife guru friend, Koji-san would have to be present as well on this occasion.

Excitement doesn't even begin to describe it... We had been chatting for months and Snecx had shown me a number of things well before putting it out publicly. Being privy to all the development, the only thing remaining of course is seeing the real thing itself.

As luck would have it.. earlier in the week I was fortunate to receive an all time grail.. after a 20 month search.. something I never thought I would be able to get near, let alone own. The Shirogorov Sinkevich collaboration, Technobambuk. 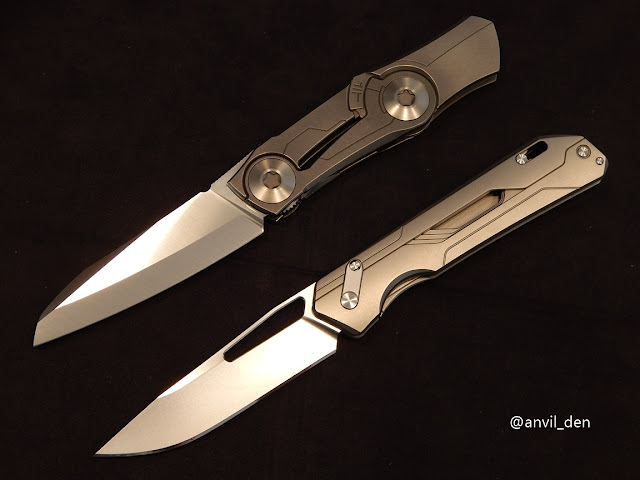 Separated by time and conceived under very different circumstances, mindset and background, yet each hold certain elements in their lines and construction that I somewhat find an association. Shape wise and overall construction, up to now there hasn't been anything quite like the Technobambuk... An iconic knife which will definitely remain so, formed by the hands of arguably some of the best in the knife industry. The IFS on the other hand, I equate with the unveiling of a top notch supercar equivalent in the world of knives today. First time maker, unheard of, no prior background.. never mind, just let the knife speak for itself as more is unfolded...

Yet between these 2, I think the common thread is the kind of artistic thought process/ talent articulated into a piece of final functional art in the truest sense. Design and concepts that are refreshing. Not just another knife roving and striving to position itself among numerous ones already out there.  Even in the minutest feature, inexorable amount of time is spent to perfectly machine and fine tune during the final assembly. Many things seem impossible but yet they had been achieved respectively in both.


It would be difficult to explain merely by looking at pictures. Snecx has written quite a bit of info of each WIP posts on Instagram,  giving a certain amount of insight into those that have followed closely. Many are wondering why only 5 knives and pushing so hard on every pin and every bevel... There is no comparison out there as this is a one man show getting the parts made externally but stringent self QC to ensure measurements of everything he wants, down to no more than 5-10 micron tolerance in most nook and cranny of the parts. The time, effort and cost are prohibitive factors to churn this into a "production" knife with the full complement of all the bells and whistles.

This is as much as I can shortly summarize -- there are a ton of other technicalities he has mentioned which now escapes my memory on this "impossible" knife.

For my own experience on things CNC machined and having to fix up, precision was a lot more obtuse and forgiving. Only that having gone through tuning, dialing in setups and settings of various mechanical things, I was able to understand, extrapolating maybe by a hundred fold to appreciate the difficulty of this endeavor to create one's own "perfect" grail knife that doesn't have all the usual trappings found in various folders.

Curious as to why the Technobambuk, one of only two collabs that has 10 pieces made were produced in such limited quantity,  I searched out some past info/ comments on it. After reading, that is where I see the similarity. No, not within the knives themselves. Somewhere out there, there is a mention equating how the time spent for making each one is the equivalent of 15 production knives. And Shirogorov production knives are not the usual get off the CNC machine, quick touch up, into a box it goes to be shipped off kind of knives. There are several hours more put into it before each knife is considered finished and given the approving nod. Again I would leave more on the Technobambuk in my next article to espouse on some of the things I have observed to make it such a unique piece.

Back to the IFS-20. No screw, no tool. Designed and engineered such that taking apart and putting back requires no more than what we are born and evolved with.. 2 hands with opposing thumbs.  It sounds strange to mention it this way but that really is what it takes and a lot of those finger dexterity to get it right.

Disassembled with a sub-chassis, that holds some of the most intricate parts in it's fold. From a casual glance, it is much like a firearm would look like when taken apart. Precision machined parts are truly --- precise. Not merely some claimed tacticool blade vying for recognition as "I'm the next coolest kid on the block" kind of knife. To prove the point, everything is laid out bare in the video... right down to sharpness and a "field" disassembly demonstration.

It looks easy enough for the creator of the knife showing it here. Given a hands on step by step live tutorial, I still fumble over 50% in pulling it apart and cobbling back up. It is nothing like any knife I've opened up so far... and if I do make a claim of any sort, it would be opening up many knives in the past 2 years... many that most people would be too scared to pull apart.
Specs?
Ok most time I leave these out as the information for most knives are out there somewhere. In this case it is a little obscure.. if it is not easy to judge, the IFS-20 really is almost the same size as a large Sebbie, in both open and closed form. Hence a blade length of 3.625" and OAL should be almost the same if not same. A tad slimmer in hand feel due to a straighter butt of the handle. 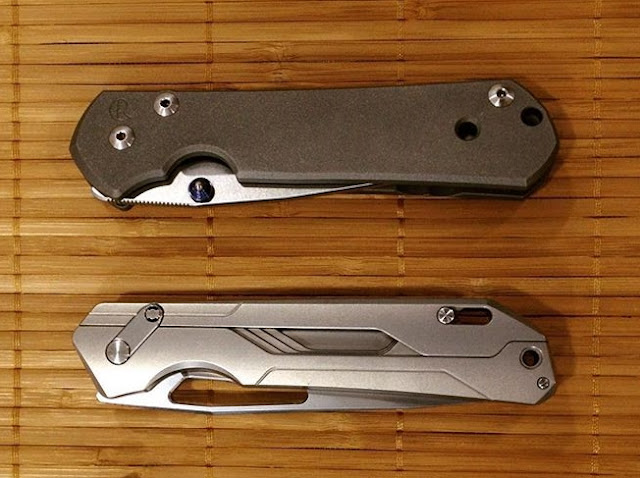 The name...IFS-20?
It stands for Interlocking Frame System 20 where the number comes from the 20th prototyping giving rise to this final form.

Features
I am merely skimming on the surface for now as this probably won't be the only write-up. A more in depth and technical piece later on is needed to give a better understanding into the mechanism of this knife.

If the video was a little too fast or small.. here is an "exploded view" of all 18 components...
The "keys" or pins are well.. key to holding up the knife together. Again to stress, it's precision, precision and more precision on each of these parts to get things right. They are also the parts where everything is pivoted or locked against etc without a thread to provide any kind of possible adjustment. Yet upon assembly, everything is centered up and would need to stand the test of time and usage.

Each cutout and shape has a specific purpose.

A fully detachable and hence replaceable lock bar insert and shaped detent. While I don't think this is the first ever attempted.. at least on a shaped metal detent but it serves dual function as an anti rock lock mechanism...a two point blade engagement in a perpendicular fashion, keeping things snug. Clean and functional but quite a challenge to final-fit it right...
Next comes the convoluted part that I was obsessed  to find out every detail- which was only revealed late in the progress. The spring tail latch locking backspacer keeping the integrity of the knife in one piece when assembled. Each section of the convoluted look is not for aesthetics as once in place, almost nothing can be seen. Again it's form following function, each in itself a functioning section for something within the knife, holding it together.
Having avoided mentioning the pivot, I will admit that is because for weeks, it got me stumped on how it actually worked until a few key pieces were in place and I saw how thy fit together on the knife... There really is a fair amount of interlocking not only on the handle and sub-chassis main pieces but in these smaller parts as well. Since there are no screws, the fit and alignment has to be spot on.  The clip is another dual functioning part. As a clip and the final piece in the assembly to latch the rear up.
Just to complete and show the other side of the earlier full open pairing...

There are a ton of things to question apart from it's seeming complexity like why asymetric sized washers instead of bearings. Why the need for a different detent etc. 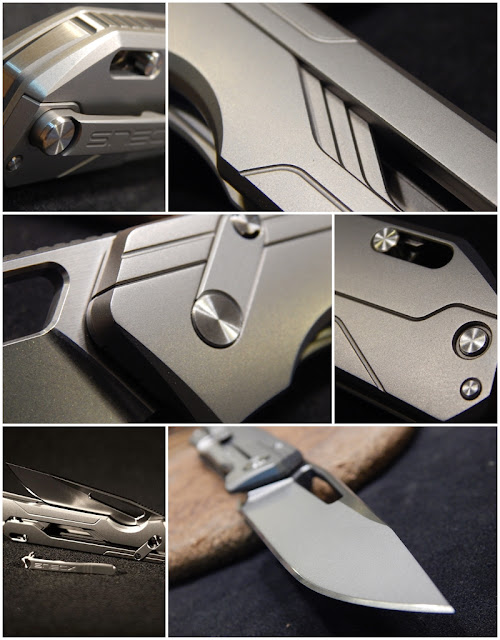 After a long winding post, I'm not sure if how these 2 are viewed by now has changed for some. It is not easy with just titanium sandwiching a piece of steel and make it attractive and classy.  What I see really is how design elements and concepts have materialized into a final functional form without the need for extraneous embellishments. In fact simplicity of material reduces the clutter letting many of the ideas and design show itself which are composed very much of clean lines in both. There is nothing wrong with adding other materials like Damascus or Timascus etc but rather than add, in these instances it would detract from the intended visuals and masculinity of such designs. To end it... I'll leave an inverted pic over here.. further simplified to see the actual lines by removing the colors. 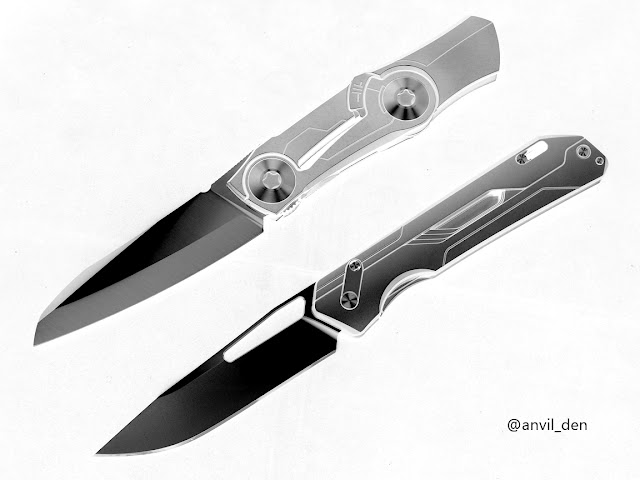