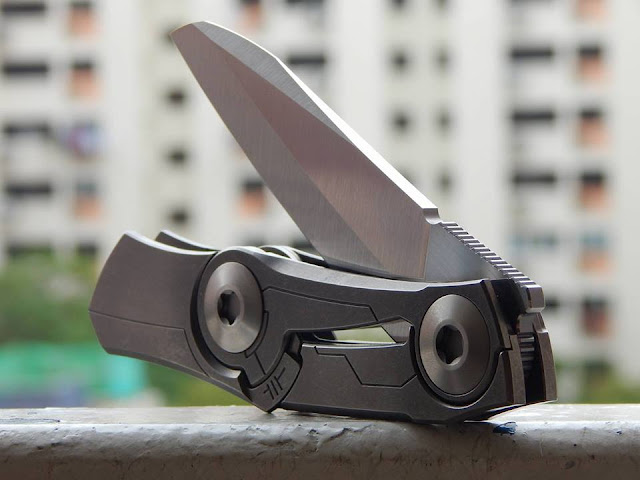 Coming across it for the first time in 2014...my first thought was "What a weird name!"  As usual, I was struggling with the translation of things read, piecing them slowly together. Months passed and this model really piqued my interest... It moved to the no.2 spot on my grail list. My list is short. No more than 5-6 items for the really "want" vs "I would like to have". Mindful this was at a time when even a production Shirgorov in the secondary market seldom pop up, Custom Divisions were hardly even heard of then, let alone seen.

One of the most talked about attribute is of course the changeable positions on the integral back half of the handle. It's subjective as I have seen comments on both sides. Frivolous? Gimmicky?

I'll leave that to individual opinion but my take is this... the designer, Dimitry Sinkevich has probably thought some individuals might want an overall straighter knife while some would prefer the ergonomics on a humpback handle. The latter preference no doubt has also been a signature of sort, going back to his other designs like Dark, Tetra and later the Cannabis and more recently the Poluchetkiy and Jeans etc.. Other knives that bear these traits would be the Mangalore II and what I perceived as an angular descendant to that, the DO flipper.. there's more but guess that's enough to bring home the point.

Having an adjustable handle certainly satisfies more people. Only problem, there's a grand total of 10 pieces ever made and two prototypes. From what I read.. the amount of time to produce one is the equivalent of 15 production knives at the factory. Guess that explains in part the limited numbers made.

More about ergo and adjustment of the handle later. 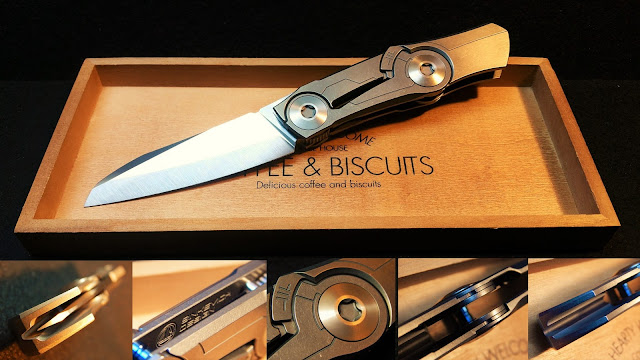 "Blade length 90 mm at a thickness of 4mm in the butt, Vanax 35 blade material (59 HRc). Execution of the axle assembly - double row bearings"


The above was taken straight off a translation of an official announcement of the specification.

Measurement of blade length is all the way from tip to the edge of the handle (aligned) to the centre-line of the pivot to get that 90 mm. Actual edge itself with the slight "curve" came up to 92 mm from my measurement.

Massive oversized pivots definitely adds to the visual but no doubt has a functionality for a certain stiffness needed in the overall construction.

Almost seems trivial but maker's mark and other info engraved on the inside has also been my thing and that is one reason why I probably am more enthusiastic about the collaboration pieces. This one is no different, both sides facing each other like most of the others... (the recent Dr Death/ Mayo collab was a departure though with those on the outside). Here too it is a little different but a casual look at the usual lower inner side says there wouldn't be enough space at least for the designer's name and logo.. So at the top it is.. 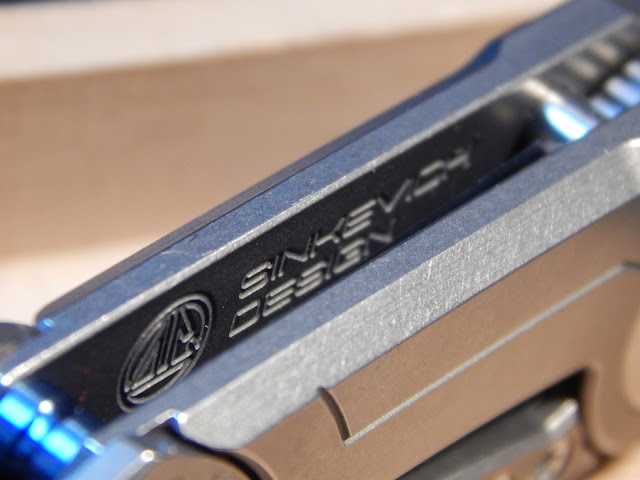 Each of these parts are custom milled and each knife comes with it's own brass key/ bit which only makes perfect sense as otherwise I would think those having it will be hesitant to ever tinker with the 3 position adjustment.


When the knife first came, I was wondering about the groove on the insides of the handle. It became obvious as the positions were adjusted.  Looks simple enough but factoring in all the moving pieces.. the slightest bit of being off would be glaring and not to mention, the potential blade rub. To imagine the amount of time to get each one of these all perfectly aligned...

Not all Shiros I have come razor sharp especially the older ones. However the Vanax 35 here and my other recent arrival the Jeans collab, Vanax 37, are both pretty much up there in terms of sharpness straight out of the factory. I have never really used this steel and could not comment much. But from the initial observation and letting the edge of both knives ride across the thumb, I certainly would not want to apply too much pressure to test their cutting ability.

It's interesting that the steel type is not marked anywhere on the knife. For collaborations, again this is usually found on the insides of the handle. Yet on both of these Vanax blades.. Zilch, nada..  Hidden somehow behind those pivot plates here? Maybe..

My personal preference? Keeping it in the drop down position which gives the best ergonomics when opening the knife... It does make the handle a little shorter. Noticeable but not detrimental when holding the knife.

I'll let the pictures do the talking here... 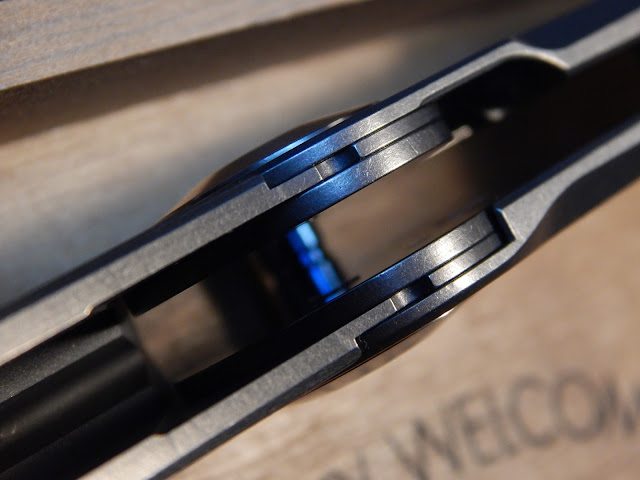 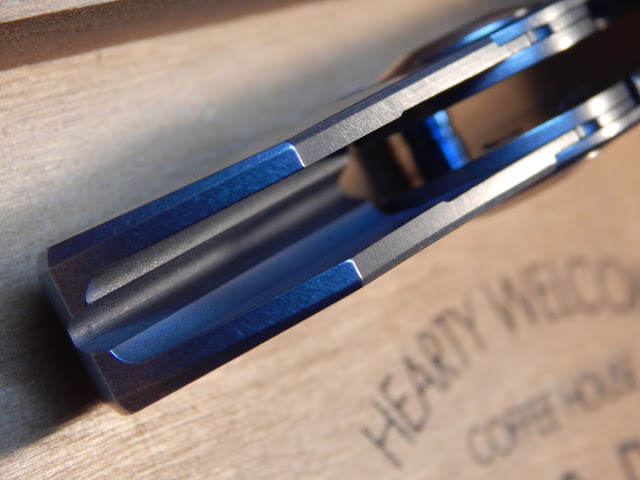 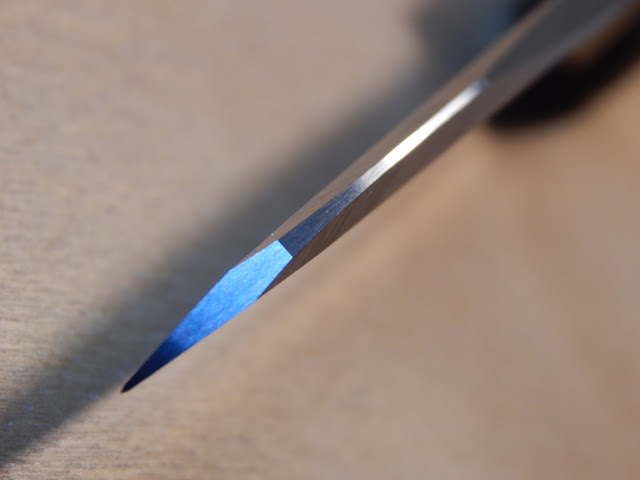 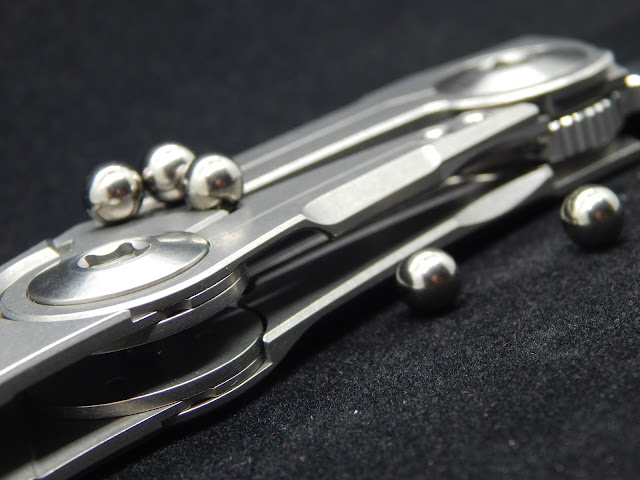 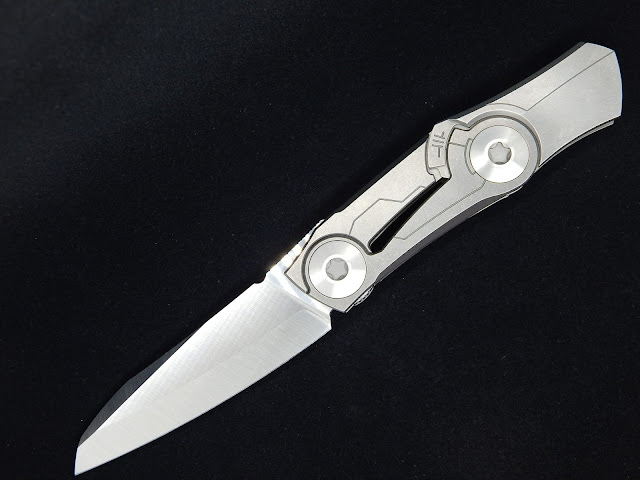 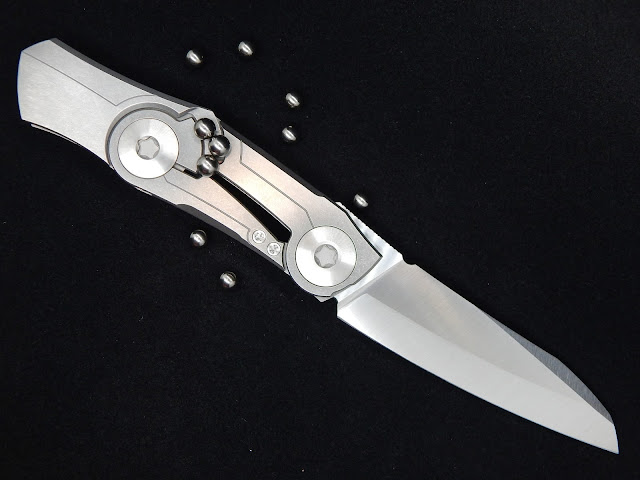 Symmetry. Almost identical on both sides, saved for the lines milled onto the handle and of course the frame lock. Numbering is external and on the lock side of the knife. No clip, no lanyard hole either. Zen minimalism yet with an exotic techno air surrounding it. 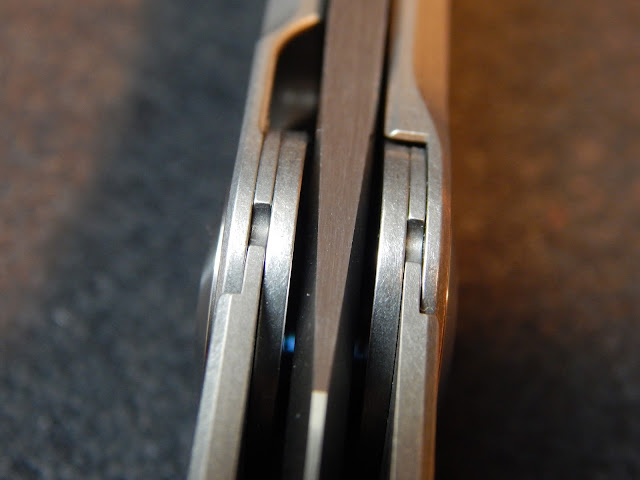 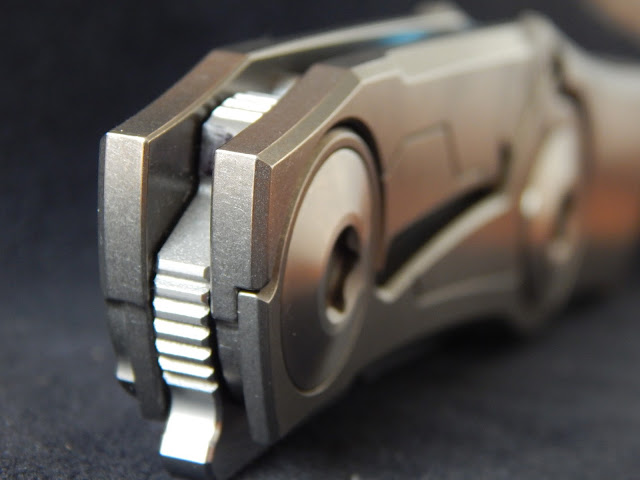 The amazing thing lies in the action of this knife. Smooth actions, slick bearings, deliberate swiveling during open and close.. I have pretty much seen it all from the Shirogorov that been through my hands. Yet not one quite like the Technobambuk. Owing to the way it is deployed, no matter how you look at it, the leverage of such designs are not optimal. With a hard detent, it would be pretty much impossible to open smoothly. Too light a detent, as we all know the tendency of a blade to half flop and not get a full lock on is common. Or simply a blade can be shake loosed from the closed position.

Yet on the Technobambuk.. there is none of these negative attributes. Balanced. The MRBS in here certainly has a part to play, yet I would not overly factor the whole slickness of deployment to that alone. The accelerating momentum once it pass approximately a third from close pretty much ensures a very assuring lockout as long as the thumb and index finger is not in the way. I pinned it down to the pivot size for one and the relatively heavy blade .. or from what can be seen the weight distribution of blade weight that seems a little center to front bias.


In concluding, because of its rarity and possibly one the best knife I have at the moment, it would not likely be carried as often. yet the practical blade shape and the seemingly tough looking satin finish begs to be used without much potential to scar it up too badly. Well it remains to be seen what will be the outcome but whatever the case this would be one knife to be enjoyed for a long time to come.