In a nutshell, size wise, Buster is about having the largest blade on the slimmest handle while achieving the best balance possible.

Mated with precision and his penchant for ultra tight tolerances, it is definitely a work meant to showcase these aspects. More importantly, the design concept focuses on problem solving the usual niggles associated with many folders. While there is much to ogle as the knife is picked up, it was meant as a fully functional workhorse. Thus there is a need to look at it from various angles and starting with the practical.

Parts for all remaining Busters are ready and key features will remain constant but from the point of tuning to different finishes for the next 16 up and coming ones-- consider each to be an experiment in itself. Whatever those differences maybe, there would be no doubt  that each will come with a pristine fit and finish on every knife.

This is the story of #2...
An impossibly small flipper for an incredibly big blade.
Not being a fan of a big dollop sticking out like a sore thumb on a knife especially a big one like this, the smallest possible tab is certainly an appeal... provided it must function optimally.

First flip out of the box, blade snaps to lockup with authority albeit a little slow due to weight of such a big knife and what I thought may be a need for the lube to sit in more... The initial consensus was, this is more of a "trigger-pull" rather than "light switching" kind of blade.

It gets better,  but more on the action later...


Hybrid Detent Pin System, HDPS
First up, a radical departure from other knives... "Rod-Detent? Stop-Lock Pin?" what do you call it?

Fancy nomenclatures and acronym alone does nothing and the question is to ask, "Why reinvent the wheel" or in this case, the detent ball and generally the whole lock area? - To address the ease of maintenance, durability, not having to compensate lock strength to detent ball sizing and still having a desired smooth action throughout the range of motion.

The goal was to achieve a state of consistency while ensuring everything is tight, yet smooth with the integration of the detent and locking surface on the pin.

Quite a sackful to fill...  after 12 days of of flipping, I have to say this system indeed work.And it is really something to get excited over in a knife, which doesn't often happen with me.

Action from start to finish

On tabbing the flipper.. the massive tang lends it's weight to nudge the lock outward allowing the fillet radius/ chamfer * a gradual transition that eliminates any sudden on/off" feel.

The securing of blade in closed position is liken to that of a spring latch assembly of a door lock.

With the pin disengaged-- the lapped and polished flat end glides on the equally polished blade tang, resistance is imperceptible and accelerates all the way to lock-up.
* for being a machining ignoramus-- that sloping end section on the pin is either a fillet radius or a chamfer-- go Google and decide what the correct term should be.. I'm 50/50 on this ;)

When locked in open position-- it makes partial use of the pin lengthwise to stop the blade from moving further. The lock setting here looks simple enough except for makers who will understand the nuances on this part of a knife and looking at how it all has to be given a new approach and the tolerances with the pin here. The accuracy of where the hole for the pin is pressed fit into has to be spot on.

Rock solid. Zero break in time in this area. Flush fit and absolutely stick-free. I honestly cannot ask for better lock up in a knife. Turning over, it can be seen that the ridiculously large over travel pin at the other end is snugly nestled into the hook on the blade. Combined with the thickness of the tang and large pivot, there is no concern over any lateral wiggling/ blade play.


Disengaging to close, unlike traditional ball detent, the HDPS is immediately released just as during opening.

In a normal ball detent there is still quite a way before the the tang's end pushes it's way past the detent ball-- resulting in the familiar 2-step motion in closing.

For knives with weaker lock and or very small detent relative to blade size/ weight, this may not be felt much, like Buster here.

The key difference is that the functionality of the lock is not being compromised for the sake of "smoothness".

This is smoothness in it's truest sense from open to closing motions. Packaged up together, it is another feat pulled off where one doesn't think of it as a washer based knife but I was comparing it very much to the best IKBS or MRBS bearing knives out there.

If one thing is still not apparent by now, it's how the entire detent is fully exposed. The open design  does not leave much place to trap dirt and grit. All that is needed is a wipe without a full disassembly on most days. 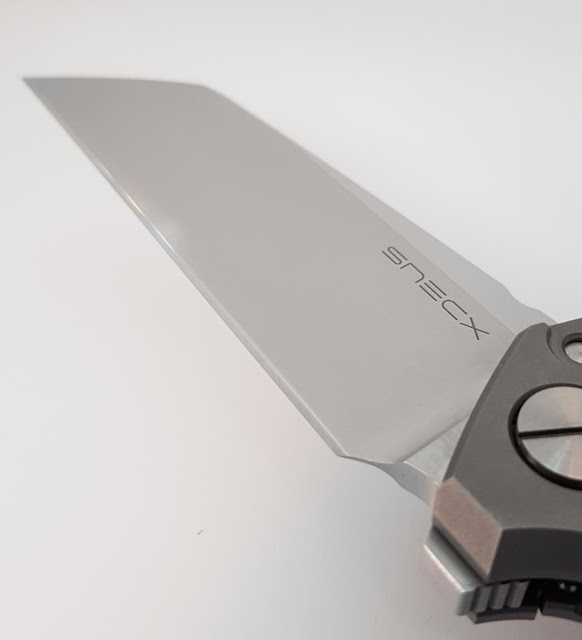 A knife that cannot cut well is essentially a useless knife.

Having said, the edge has been approached with an almost religious fervor. Entirely hand sharpened with Wicked Edge and an array of modded jigs. 62rc M390 with a 15dps starting off wide at 5mm thick at the spine (although the multi top grinds and chamfer makes it out to be visually slimmer).

To make cutting straight down smooth, it was "de-shouldered" at the top end of the edge for mine (other Busters may differ). Here an additional tiny beveling was ground to 1200 grit, making it stand out in the light. Apex and this are both arrow straight, adding on to the no-nonsense look of the Buster lines.

Put to a comparative test with my best sharpened knives, the cuts and slicing are precise thanks to the well razor straight edge. Put to real task in the kitchen, it again cuts cleanly with everything coming out crisp from contact with the blade. For those who takes pride in food prep and presentation, you know what I'm talking about here .


Everything is massive on the Buster, yet the illusion of being smaller is another of those things tastefully fitted into the overall design by the maker to make a visual difference when holding.

Photographing the colors right is harder than thought due to the distinct contrast of the blade and the handle. Between the choice of satin and stonewash, I took the choice of the stonewash after practical consideration of putting the knife in use. Stonewash might be considered mundane compared to many other finishing out there but Snecx has elevated his methods to an art that needs to be seen in real to appreciate.


Weight and Milling
Weight shaving in knives is all the rage these days with  materials milled out to the max.

There's  however a big difference between knocking off the grams/ ounces and having a  knife that still feel balanced at the end of the day. It takes a lot more in the thought process to carefully balance the weight with where to cut out from the design to retain the practical aspects and comfort when actually using it

I was half expecting a bias with the blade's weight pulling it down when gripped. But the balance was well built into design of the handle as well giving it a truly neutral feel.

No shortcut into areas that can't be seen. Every bit taken out resulting in ever more lines and steps are just as meticulously finished on the outside. The same even tone of the stonewash on every facet on the entire handle inside out.

This review was supposed to be up last weekend but I felt the need to pocket it afew more days to be objective. One of the first thing noticed initially were the sharp lines found everywhere. What Snecx calls a "prismatic" finish, where things are milled and lines forming the various angles meet results in a crisp clean finish. It is an attestation to the meticulous way of putting forth the kind of intended precision and the theme in Buster. However a couple of things were a little too sharp to me. 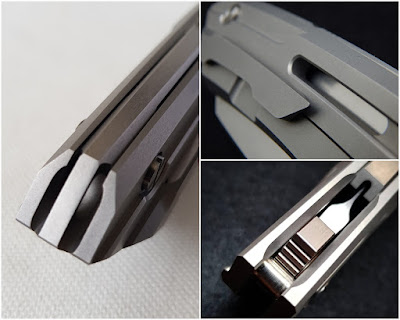 While the objective is clear on such sharp lines, the angular pointy-ness presented makes for handling and carrying (not having the sharp points catching in the pocket etc) something to think about.

Particularly the 2 forward facing corners at the flipper tab. One concern in having it slightly rounded was it may not give sufficient grip purchase when flipping due to the smaller flipper.

A week passed since those initial thoughts above. Metal is no match for my callus laden fingers.. the sharp points actually just worn themselves down a smidge from the flipping and poses no discomfort by now.  It can "light-switch" as easily as "trigger-pull" as seen in the video above.

All said, the sharpness of the 3 areas can easily be toned down without significant changes or impairment to the aesthetics or functionality of the knife. I believe it will boil down to individual preferences for each Buster's owner to come.

The floating pivot is something I like. Not just here but in other knives with similar pivot constructions. For one, no Loctite is needed, something absolutely disliked in a knife. Being adjustable on both sides, there really isn't an issue of over-tightening and having  things stuck. With the ease of just 2 screws and on washers and a detent that can be cleaned without disassembly there really isn't anything simpler.

The smoothness generated from the generous sized washers and HDPS makes me forget it is actually  a knife on washers speaks volume.
...


While it may not appeal with a sense of sensual flowing aesthetics due to a lack of things curvy, the polished crispness and clean lines are packaged up beautifully in its own way and not make you afraid to use it.

Combined that with a salute to the HDPS feature, something which I can only hope to see on more knives in the future, the Buster has achieved what it was intended to be.

A true big and sharp working brute cleverly hidden and tucked among its classy lines to impart an air of quality at the same time. An unmistakable industrial chic look without a need to conform to prevailing trends. 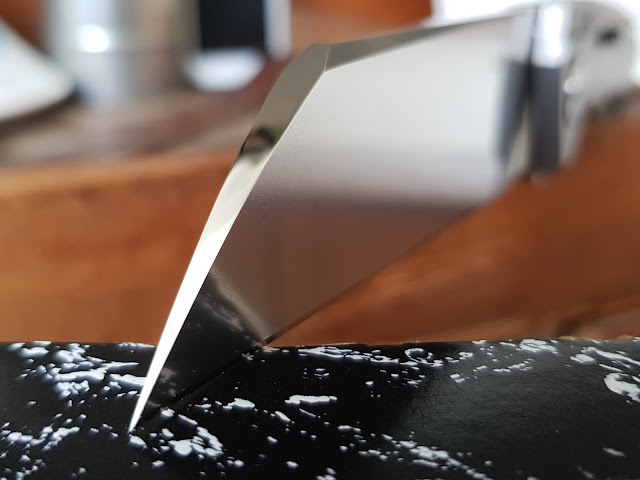 Personally, Buster will be something to pack with my field gears and of course around the kitchen 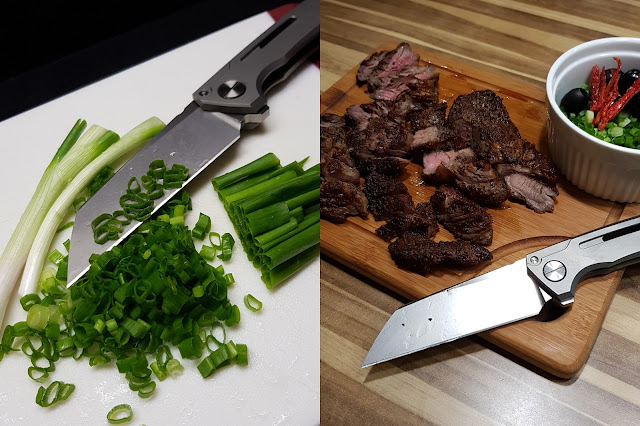 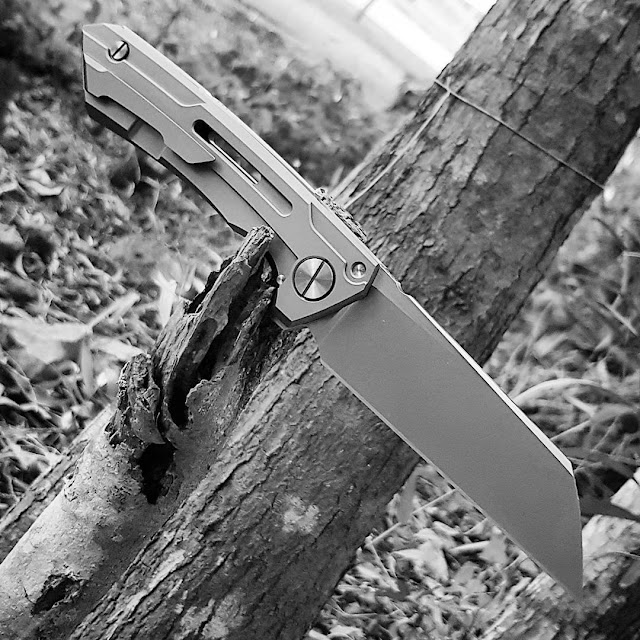 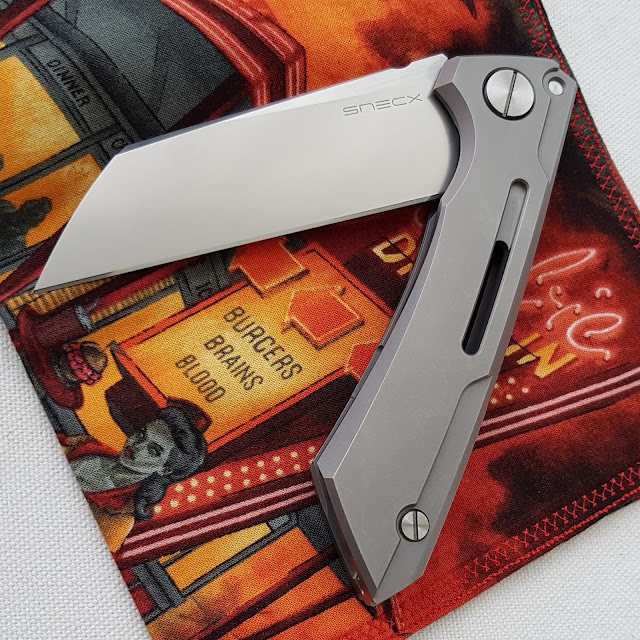 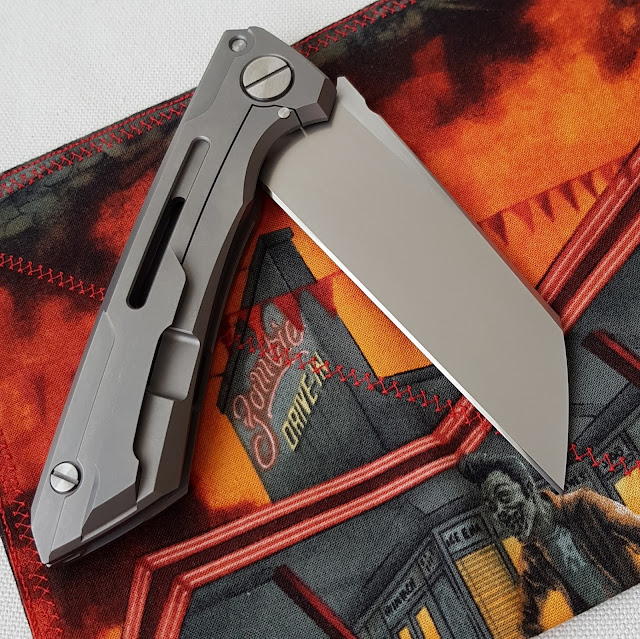