Sigma
The 9th collaboration between Shirogorov and Dmitry Sinkevich.

As usual, I shall dispense with the product specs and some of the general information that are already posted officially on the Shirogorov website.

I'll start right off to say this one is definitely a winner in my book and not just as a rabid fanboy raving because it is another great score of a collaboration piece.

As anticipated from looking at the first few preview pics early this year, it has every quality from ergonomics to great action plus a sweet sharp cutting edge mated to a perfect sizing I wanted in an "ideal" knife...

In many ways, a return to the simplicity of Dmitry's earlier designs can be seen on the Sigma. 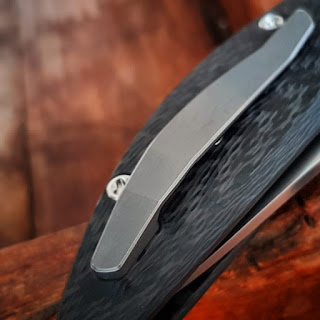 The clip is reminiscent of earlier works with spring clips. A few folks probably thought it could have used a more modern looking 3D milled design.

Deceptive!  No, it's certainly not a bent spring. Just milled to look that way. The actual spring, similar to a lock bar, is a cut-out on the underside,  hidden away from view until one peeks through.

Complete with an all round bevel finishing to ensure no hot spots, for a "plain" finish on the outside, just like an old humble spring clip.

On the whole, it imparts a sense of tactile classiness when held, thanks to the combination of uniformly fine media blasted finish. 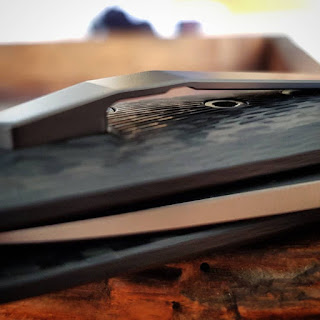 Good 'simple' titanium surface finishing is one of those traits from the Shirogorov factory that sets them apart from many.

A continuous improvement trait seen by comparing knives old to new. There are no sudden wild changes. Slow but consistent ones, each generation of knife gets a little extra and better added to it.

Other than hiding parts of itself from plain sight... The clip covers the two screws affixing the nested liner lock tucked into the carbon fiber.

Minimizing the distraction of having one too many hardwares dotting the landscape of the handles. As always... it's all about the little attention to details 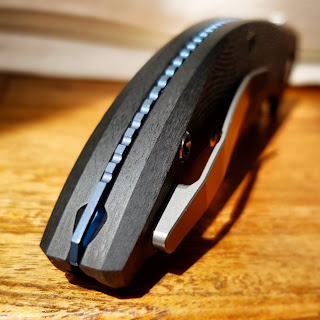 To round it off at the butt, a wide contouring that adds to a good grip and hand feel when the knife is open and ready for use.

It's similar to another of SiDi's early design, the Dark with G10... another one of my all time favorite.

If it's not obvious from above pics, the clip follows the general outline of the handle rather closely, resulting in a pleasing flow that draws the eye towards naturally towards the blade. This make sense as to why the clip is simple.. it serves to direct attention rather than try to be a showcase in itself. 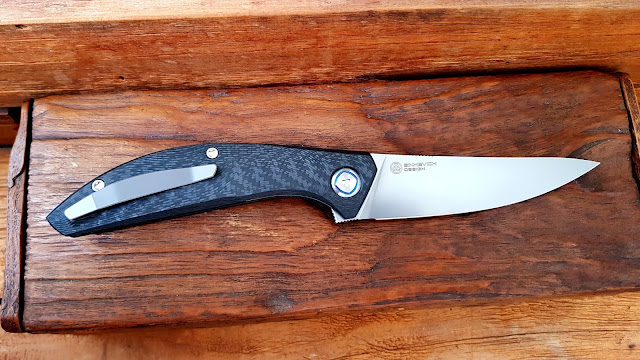 What makes a design a success? Of course asking such a question, the answer varies. Something with the simplest and cleanest of lines, where it leaves me thinking it is perfectly great as it is but can sure  take a bit more embellishment without looking overkill or garish.

The last few knives that came into my possession happened to be designed with tiny flippers relative to the overall size. In a way I was looking to see how various makers can push the envelope on this aspect to make a tiny (but not necessary the tiniest), most unobtrusive flipper tab for a more beautiful flow in the overall design while retaining a good opening action.

The Sigma came in with the smallest yet fires out confident and strong, aided by the momentum on the Persian-ish blade shape.

Rising up ~2mm at its highest point and angled towards the horizontal w.r.t. the CF handles, it opens up to a "flipper-less look. Mated to the raised humpback SiDi signature handles, it's designed to provides maximum clearance when cutting down. Collector item or not-- first and foremost a functional tool.

"Is that triangular point sharp?" To an extent, I reckon that will depend on the lock and detent setting of individual knife. Mine happen to be spot-on. Whether light switch or a forward bias trigger pulling, the ribbed apex gives a positive catch on the index finger but doesn't dig in painfully.  Blade flies out almost immediately. Very positive, all the way to full lock up from the momentum. Definitely not a finger breaker despite how it may look and hardly one of those "1/2-fired" instances.

From pictures alone, I was wondering if the sharp edge would dig into the finger when using. Similar thought arise on choking up on its choil-less design. Again no issue on both counts. Heel of the edge is angled well forward so it wouldn't catch on the finger when in proximity. Still I'll exercise caution lest the finger pushes forward onto the edge in some tough cut/ slice.

For folks who home in from the point of using a knife, the ease of sharpening with this clean straight profile on the edge can't be missed.

An edge tool that is designed with actual intention of being used. 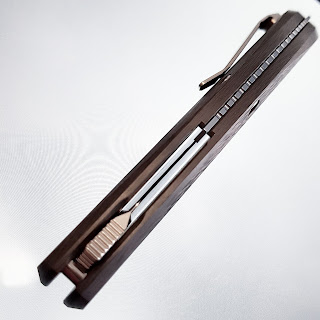 The slim zippered-look of the backspacer was one of the highlighted feature when sneak pictures of the Sigma first appeared.

Noticing the bit sticking out, it wasn't apparent why and I thought little of it back then.

Upon closer scrutinizing, it's obvious many things need to come together in very precise fashion. The protrusion of the backspacer acts like a centering indicator. A little off from the centering of the blade, slight difference in thickness from milling of the carbon fiber scales, it would all add to a glaring offset.

...all about precision yet without being loud  at the same time.


Big, light and balanced, normally one get to choose two out of the three. I like sizeable knives (ie 3.75" - 4"  blade length) with an emphasis on balance. While wishing at times certain knives doesn't make themselves felt as much when pocketed, I've never been much in the weight weenie camp.

In fact when highlights of a knife is being super light, the first thing that comes to mind is whether it will actually be a compromise. I'll touch on the topic of "light" knives another time.

The Sigma fulfilled all three aspects. A very respectable sizing and balanced. It's hardly noticeably when closed and dropped into the pocket. Most importantly, the lightness does not convey a sense of fragility in any way. I take back my words now "hoping it would be a thinner 3.5mm spine" thinking that it would translate to a thin edge super slicing type.

While unable to pin it exactly, the flat grind on the Sigma starting at 4mm in the spine just felt thinner behind a very sharp factory edge compared to a number of other similar thickness flat-grind blades I have, including a number of other Shirogorov.

As with all the collaborations and higher tier knives recently-- sharpness coupled with a nice gleaming polish on the edge is immediately noticeable out of the box.

It would certainly be an arduous decision holding back not carrying and or using it more often.

Putting it in perspective with other knives, blade wise it is a tad longer. It feels close to a F95 right until the up-swept tip which is more delicate but feels more precise in cutting motion. Weight wise it is the same 88gm (for mine, official spec says 85gm) as the similar length CF Russian Dr Death collaboration, another 100mm blade length knife that felt much slimmer and smaller due to the narrower width of the blade. 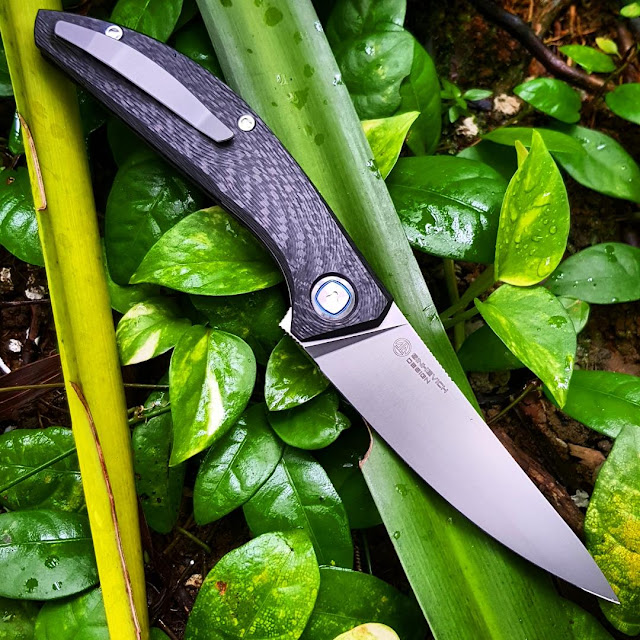 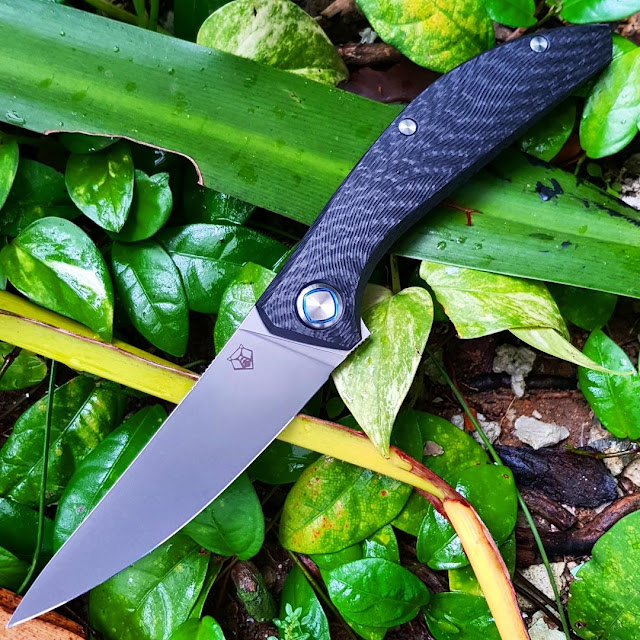 The Sigma is a winner for me as stated at the start of this writing. In the truest sense of being a perfect all-rounder even among all my other Shirogorov knives. Yes, this is a big statement to make. I have to admit like most of my collaborations it will be more inclined to sit within the collection to be appreciated rather than becoming a daily user.

My philosophy hasn't changed on what makes one a "favorite" or top few within that list  -- "when push comes to shove, which knife will I take out of the box and use without hesitation". To that end, consideration of ergonomics, ease of use and my comfort level with its overall size etc are various things factored in.

For now-- the clear winner is this latest Sigma flanked by my two Cannabis, the Ice and the Real.