Endless Strop. The last step to finishing an edge shouldn't that take forever.. but things are a little different here.. Convexing and de-shouldering. Not having a very precise guided sharpening system, much has been left in the finishing touches of stropping. In itself it was another subset of experiments and learning...

As with most things these days, it all started with keystroke offerings to the Great Google Deity, searching and picking up the the bits and pieces of information available. After a while, it seems everyone has their own  unique DIY wizardry and mods that seems to work. To avoid going through 7 billion attempts as there are as many people on earth-- I decided the best is to ditch everything and experiment what works best.

Strops.
A mental calculation on buying the number of strops needed would put me on the verge of filing for bankruptcy. Yes, like any good scientific endeavour, blinds and controls having similar parameters to actual test pieces would be needed..

DIY strop boards are the cheapest. Just a piece of wood, glue and a piece of leather. Some will swear by X brand or Y strop on the market.. I'm not arguing but if you think that because the leather comes from an animal that has been massaged since it was a fetus in the womb and slapped onto a  majestic looking piece of mahogany for added sturdiness -- go ahead, get them.


For me, the focus is first on the leather.. From tough to chew cow hide to canvas and everything in between... short of baby animal skin with pieces of placenta still stuck to it, I have pretty much tried them all. Including corrugated nylon strips.

Verdict: Soft thin horse hide works best. I have no specification apart from being 5mm thick pieces from some online website-- I just bought from the cheapest vendors. There are other leather pieces I've paid that cost a a few times more and their best use ends up as things like mouse-pad or  fashioned into coasters for my endless cups of teas.


This, however is only 1/3 of the complex equation. Next are the compounds.

Again the quest went with the entire repertoire of red, green, white plus two hundred thousand other colors of compounds within the electromagnetic spectrum and on it went further to a whole array of different diamond compounds. Some were good, some not. Some work on certain knives/ steels but not others... It was an alchemist nightmare... lots of data and not really getting anywhere.

It was as bad as trying to nail how to brew different kind of tea leaves around the house.

...breaking down empirically, when stropping-- 3 things are in contact.. the strop surface and the type of steel and the compound in between. try with each one just having 3 options, factor out the number of options one can have... !

But wait, it's not necessary to go for what is best for each steel type.. Since the hardest steel in my usual doodling is S90v which imo is one of the "bitchiest" steel to get sharpened and honed-- whatever works should work relatively well for less demanding steel (and yes-- it has been sort of proven when I stropped my D2, Elmax, Cr8 etc with relative ease to get them to where its desired compared to my S90V knives)

After throwing out the whole entire rainbow of colored non diamond compounds, my preferred ones which worked well so far are Wicked Edge 5 and 3.5 microns paste... (ok, partly because I have not bought their other sizes but test were conducted with 3-4 other brands of diamond paste with the similar stated particle sizes) 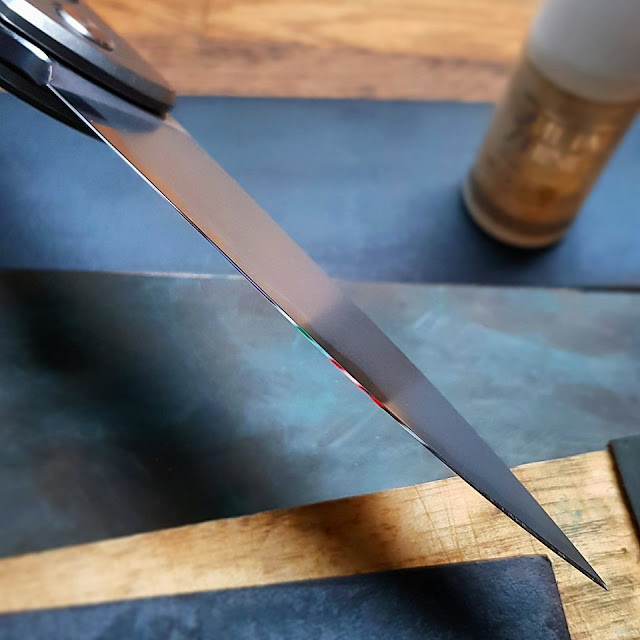 Applied sparingly  (dotting and slightly spreading when dry), a 1gm tube do last a very long time on my home brew 2.5" x 10.5" strops. Other diamond compounds of the same microns was frustrating and have been used a lot more with lesser effect on similarly made strops. This is important because grit-for-the-buck, it is really the best value for the money although I always think that 2 tiny 1 gm syringe costing US$14 is expensive. (Yes-- add another US$30 for shipping because I live in some ass end of the world where no one sells the stuff I ever needed).


The Strop Feel
This is rather subjective as learned from talking to friends and trying their strops during blade gathering sessions. My preference leans towards the "dry" feel but not sticking or facing strong resistance/ drag as edge is "spread" on the leather.

Grit
Is the grittiness a part of the equation? I personally deduce a lot of that actually is due to the fine bits of steel that is being stropped off and subsequent passes picking up a little here and there. I don't really count on them to help much during the stropping process which some say is the key... where these bits work together with the compound to form a metallic paste that aids in the stropping (because if this is the case, why bother having any more diamond particles in there?). It's more a case of "what you feel is not what is real" to me.

But I do prefer to have a certain grittiness.. it actually helps to judge as the edge is moved across the strop to know if it has been pressed too hard or angled correctly especially in the first few passes before settling into a rhythm. In any case I use a finger to tab off any large pieces on the strop to avoid stray scratches especially once a wire edge has come off the knife.

Stropping
When the flow starts going smooth, which for me is a rocking motion. Forward and back, forward and back (see video)... it probably sounds stupid but having that uniform movement rocking on the heels and ball of foot with shoulder slightly "locked" (not stiffened as that would usually make pressing down the blade too hard) actually works a lot easier.. the only other movement is now with the wrist and slight roll of the fingers holding the handle to angle as edge nears tip.  Strop -Tai-Chi, Spreading Zen or watcha-wanna-call-it!

If it is quiet enough-- listen to the sound of the entire stropping motion from end to end.. one continuous "ziggy" humming. Too much fluctuation usually means hand unsteadiness and or too rapid a change in the tilting towards the tip or change in speed of stropping.

Tip to heel or Heel to Tip Motion?
Your call. I prefer Heel to tip generally. Angle change is easier to control.

Press a finger to the blade when stropping to ensure entire edge gets in contact like during stone sharpening?
Again your call... but there is a tendency to press too hard especially if you are doing too many continuous passes on one side.

Ok-- one final section. We read all the time, never mix the compounds on your strop and strops need to be refresh.. Yes on the latter but on mixing, I find different results. Mixing different microns of the same brand or different brands of diamond paste is like what everyone says.. not a good idea.

And when a couple of strops were too dry with use, softening with mineral oil was another bad idea which I found out.

But something different happens when adding fine liquid metal polish to a drying out strop... This helps greatly in my 3.5 and 5 micron strops. it increase lifespan in between adding more diamond compound and even on those with less than stellar compounds. I know there are a ton of such liquid metal polish out there and have also yet to experiment with larger grits diamond paste. Hence this is not complete but so far on above combos, it's been rather positive.

For one- it at least helps to bring the shine out faster-- exposing whatever scratches still left and being more visible so that you can actually concentrate to work on certain sections to even things out.

Ok I started out wanting to write about the modification done on my F95... seems like it has become a full blown article just on stropping itself..  will cover the actual mod in a "part 2"...