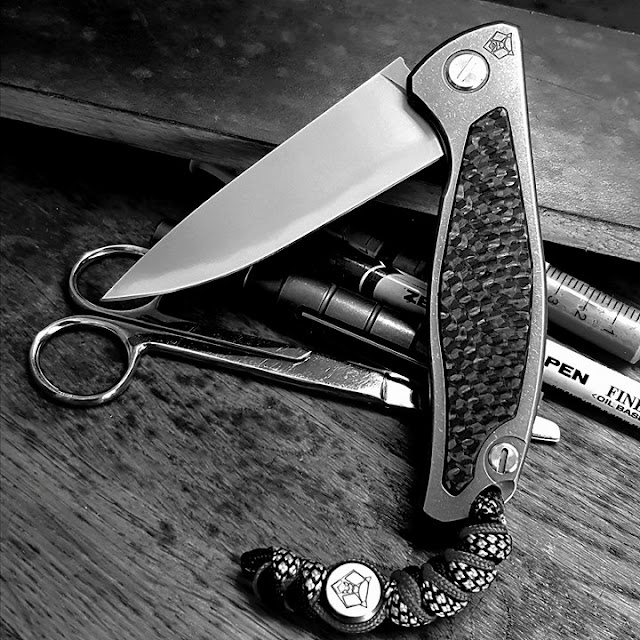 Ahem.. digressing so much from the last post-- it never even got to the latest modifications done on my de-facto EDC, Shirogorov F95.

How it all started?
When the fixation for a convex edge struck and an idea of modding the edge about a year ago, it turned out to be a half-educated trial and error that worked. But close inspection with a digital magnifier says there is still a lot of micro unevenness. Still it solved one of my issue with this knife... namely a keen cutting edge with good retention for daily tasks.

Info out there is that Shiros have between 20-22.5 dps (degree per side) depending on models (and maybe to an extent the steel type used in each model?)  Chatting with folks-- many find 19-20 dps seems to be magical numbers for models like F95, F3 and Hati and ~21 for the Shirogorov 111. Though some swear by 19 or 20 as well.

Like most, too eager and thinking good steel can take a much more acute angle, earlier on it was messed up with a 17dps. It took forever to sharpen and that widened the edge as a result. Finally gotten it to hair splitting sharp but edge retention became an issue. With such an acute angle, I was also getting tiny chips.. no big deal but annoying nonetheless.

Subsequent re-profiling took it to 17.5, then 18 and finally at ~18.5 dps-- it was better. The chips doesn't happen much anymore. Edge retention improved but not stellar.

Next was a microbevel at 22. This works fine but under the magnifier-- my microbevel was still horribly uneven in width. Much later I discovered part of this was due to the limits of my sharpening system and a little overdose of elbow grease on my part :)

All of these started my process into looking more intensively at stropping and the making of a thousand different strops to test various compounds etc... which are detailed in the last post.

Next, the edge was re-profiled further at 1 degree intervals.. so the 18.5 stepped up into a 19.5 followed by 20.5 and then another step somewhere between this and the 22 dps microbevel. Frankly I still don't trust the accuracy and clamping of my guided system even after making some changes and DIY to it... but it's all I have to sharpen on.

A key process was trying to strop everything down to a curvy surface after the sharpening...I have no idea really if it really work then, as the thickness behind the edge by now is not exactly thick enough to eyeball easily and my digital magnifier can't focus depth well.

As mentioned this was a positive trial-and-error experimentation. The theory behind seems sound and all it boiled down to was the execution.  Well, everything seems to work.. I slice and slice and it did cut the way I like my knives to be... "de-shouldered" with the least amount of resistance like my convex edge Japanese kitchen knives. The edge lasted well too.

For almost a year now -- it only got stropped every couple of weeks and never needed another serious sharpening session.


The idea of a faux harmon line came up earlier but I filed it away till last wee when a week at home and boredom got the better of me... 1st thought was whether is it even worth doing? Aesthetics is one but what if it ends up looking "cheap". 2ndly-- is there an added functionality or can I add anything to the process? Part of it was to try and remove some scratches near the edge on the stonewash surface.

Anyway I started out on another "test" knife with D2 steel.

Masking and polishing away, it was easy quick work.
I initially tried to sand off some before the polish. Absolutely unnecessary. in fact it left lots more scratches but the dremel and diamond paste took care of things fast. In fact it was "too easy" and soon a hi shine "mirror started surfacing.

It wasn't a bad thing but after removing the masking tapes.. the blade is basically 2 tone with a wavy line clearly delineating the tones. I need something a little more subtle...

What's needed was something more subtle and a little fuzzy with more than just one clean line.


The F95 turned out to be quite different. First, the stonewash finish is probably blasted smooth, so taking it off was a lot harder. The underlying S90V steel probably contributed to that as well.


It took a much longer time and as the surface starts to shine, it was several more rounds of gentle buffing. It never got to the same high shine as the D2. But that was actually a bonus as it gives off a hue that goes better with the remaining stonewashed surface.


Next was a bit of dremeling black magic... I changed up to a smaller micron diamond paste onto wooden cotton Q-tips. Pressing at 45 degree on a piece of wood till it became cone shaped... and then polish of right along the line, resulting in what's seen in pic here, an additional line following the masked one but in a different tone.

While certain characteristics are forming, everything was still pretty raw and scratches were slapped on the worked on area. Everywhere. I end up with maybe 100x more scratches than trying to remove in the first place... but these are only temporary. The scratches while numerous, were not deeply scored.

On the first D2 test piece, the edge was gone and I had to do a total re-sharpening after all the polishing. But D2 isn't that hard and I changed that one up into my "convex" edge as well.

My S90V F95 was still spotting a nice crisp edge so I thought if edges were taped up before polishing - that will save me some work. It was just too little surface for the tape to secure itself... a few pass at 2000-4000rpm of the dremel.. off it came and yes.. I knew that a re-sharpening is definitely in the books ;(  Ok we all learn something everyday. Maybe nail polish  might have worked better.


Since it had to be re-sharpen, thought might as well push it a little further.

Thus the sharpening was stepped up sequentially in 0.3-0.5 degree each time from 18.5.

Owing to what was done previously... non appearance of a burr was not a concern... in fact if it starts before 22..it would indicate things were really off on the edge before the sharpening this time around.

The unevenness described due to previous sharpening was manifested indirectly in the the uneven burring  appearing. It started off at ~22 but parts of it did not appear near the curve before the tip and at the heel. Taking it further this time... a full burring was achieved at ~22.5 degrees.

As usual... hitting the apex at the tip took forever... but I bide my time this time around. No forceful grating.

Finish off by going back to 16.5 degrees,, just lightly passing each side several times. This is to prep it up for the next step...
and...on to the endless stropping process.

Took muchlonger than usual because the purpose is now 3-fold. First to get apex cleaned up and smoothed. Check that there is no chips or areas that catches when slicing which may be due to an undulating apex.

Secondly to curve out all those stepped angles into one continuous curve and lastly, this time it will (hopefully) also move beyond the already non existent shoulder and flow with the recently polished out area. And here it is also where the removal of all those polishing scratches will take place...    Several sessions at multiple angles of stropping..

A lot of these is "I think.... that's how it will work" but truly without an idea if it actually does. The surefire way is of course to test it.

By way of bench-marking, tapping down and cut-- so far only my Rockstead Higo does that nicely with its machine perfect convex grind and my ultra sharp custom Buster, hand ground and manually sharpened to ridiculous accuracy by my good friend Snecx. So "will the F95 be able to meet that mark now?"

and...cutting down on folded lines on a standing piece of paper is a little too easy by now. Finding a way down the middle of 2 folded section? 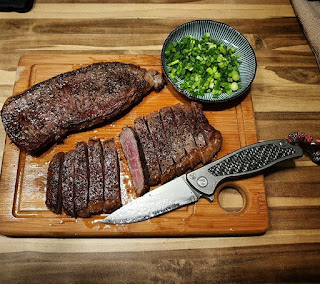 Edge retention? No I'm not gonna start cutting hemp ropes to the point of failure. Just use it normally.


Based on the rate I use this knife-- if it doesn't need a sharpening and even less stropping than before this whole modification-- it pass.


Next, on to my first use after its done. Dinner!
Perfect surface at each cut-- flatter than ham off the slicing machine. 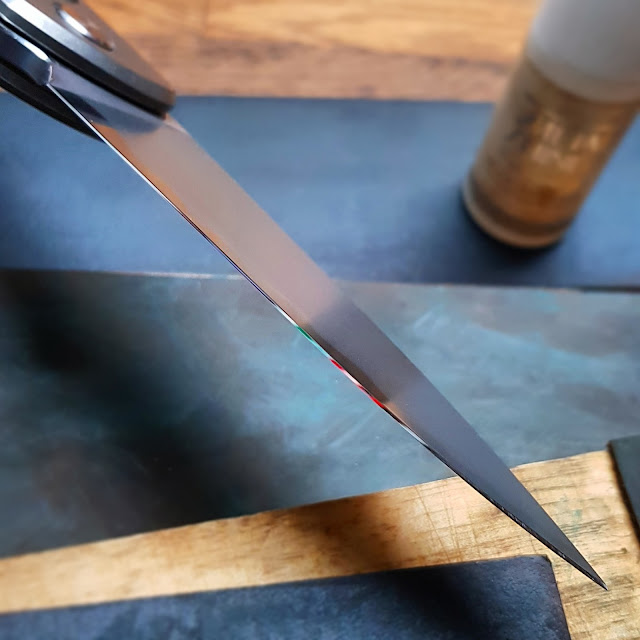 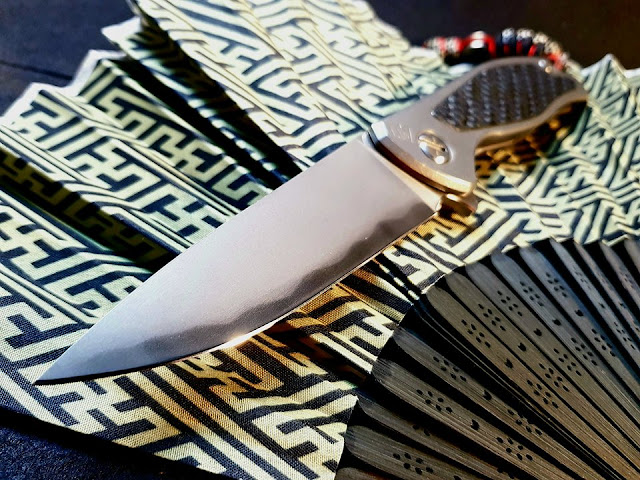 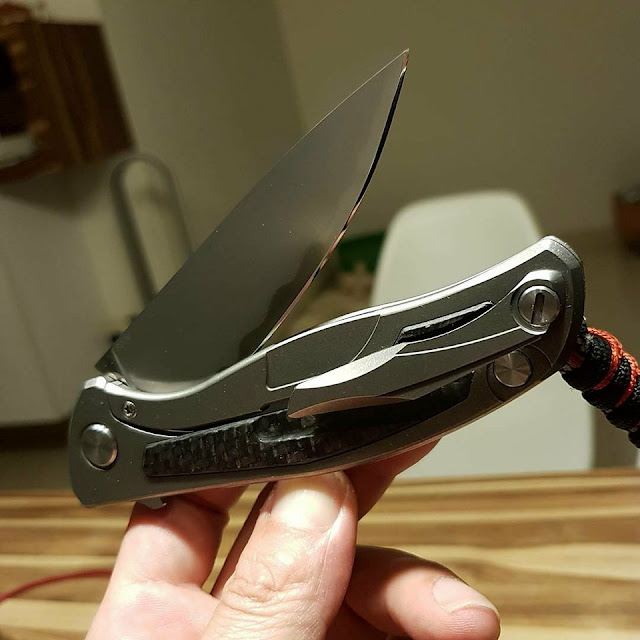 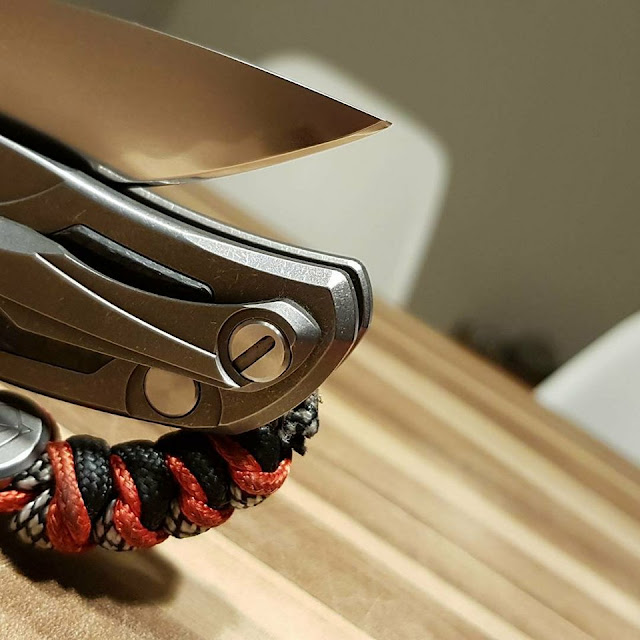